The Amazing Spider-Man 2 wants to be all things, altogether, all at once, all over the place. Overflowing as equal parts comic book superhero epic, Saturday morning cartoon, night time soap opera, romantic comedy, wink wink we-can-top-it do over of the Sam Raimi Spider-Man films, and  at times feeling like a bombastic big screen attempt at Spider-Man: Turn Off The Dark on Broadway, The Amazing Spider-Man 2 is a sprawling assault on the Spidey senses hellbent on overdoing everything.

Andrew Garfield returns as Peter Parker, alternating between charming, quippy, and mopey as he attempts to balance his exciting and dangerous superheroic life as Spider-Man with his on-again/off-again it-was-never-really-off-until-oh no-it-really-is-off-now! relationship with brainy blonde cutie Gwen Stacy, played by Emma Stone. Peter's got a lot of things going on, zipping around an unbelievably dangerous, explosion and car crash-prone New York City fighting ridiculous amounts of crime, all set to a synthesized score by Hans Zimmer and The Magnificent Six (including Pharrell) that sounds like off-brand Vangelis. While saving the day, Peter is haunted by the stern, disapproving frown of  the ghost of Gwen's late father Captain Stacy (Dennis Leary). This leads a guilt-ridden Peter to break up with Gwen, in the old superhero cliche of thinking that will keep her safe, but it only means Peter ends up stalking her from the tops of skyscrapers as Spider-Man while Gwen goes to work at her day job at Oscorp, the evil conglomerate that spawns all of his super villain adversaries.

One of those very adversaries is Max Dillon (Jamie Foxx), a meek, pathetic, lowly Oscorp electrical engineer who hero worships Spider-Man. In a typical Marvel science-gone-amok accident, Dillon falls into a vat of electric eels, which not only repair his gap teeth but transform him. Don't you know? He's Electro, a being of living electricity who can reconstitute his physical form out of lightning complete with boxer briefs for his electric junk. He later somehow acquires a super villain suit that hilariously has a lightning bolt straight from Harry Potter's forehead emblazoned on it. Electro is shockingly powerful (sorry) enough to zap all the juice out of Times Square, but none of that electricity adds extra voltage to his brain. Those seeking an ingenious super villain plot need look elsewhere; Electro's got nothing going on besides wanting to kill Spider-Man and rule New York "like a god." ("A god named Sparkles?" is one of Spider-Man's better digs at Electro.) Peter and Gwen, respectively the number two and number one science geeks newly graduated from Midtown Science High School, proudly combine their knowledge of eighth grade science to defeat Electro and save New York City (as well as, excessively, two airplanes about to collide in mid-air that none of the heroes or villains are even aware of).

Meanwhile, prodigal son Harry Osborn (Dane DeHaan), a boy billionaire who wins the No-Prize for Marvel's Most Ghastly Comb Over, arrives back in town to inherit Oscorp from his evil dead father Norman (Chris Cooper). Harry's got no brains either; he promptly loses his father's company to scheming lawyer Colm Feore, as he's too distracted by trying to find a cure for his other inheritance, a disease that's quickly killing him. That cure, he learns, is Spider-Man's blood, which Peter is unwilling to donate, fearing it'll turn Harry into some kind of super villain monster. He was right about that. With Electro's help, Harry is able to procure the secret formula Peter's dead scientist father created, and sure enough, it turns Harry into the Green Goblin. This time, there's no Transformers-like mask for the Goblin, DeHaan's impish face with the appropriate amount of prosthetics and makeup complete the Green Goblin's grotesque visage. Despite not seeing each other since they were 10, an afternoon of bromance bonding made Peter and Harry best friends again, but all that quickly flies out the window like so much Gwen Stacy.

Only those who are completely unaware of the forty year old classic Spider-Man story or haven't had the comic book nerds in their life already spoil it for them will be shocked at the ultimate fate of sweet Gwen Stacy. Prior to the emergence of the Green Goblin, which signals curtains for Gwen, the brightest point of The Amazing Spider-Man 2 is the snappy banter and natural chemistry between Stone and Garfield. Despite an uninspired, plodding script punching everyone concerned square on the nose, Garfield and Stone do their best to bring an electricity to the material that even Electro can't generate. Peter's primary concern isn't the super villains out for his webbed head, it's the threat of Gwen moving to England to attend Oxford. Peter's grand breakthrough as a boyfriend is choosing to move to England with Gwen ("they have crime in England!") Alas, none of that is to be, as the Green Goblin throws a pumpkin bomb in the happy couple's plans. Competently staged as an homage to Gwen's demise in the comic book by falling from a great height, The Amazing Spider-Man 2 trades the infamous sound of Gwen's neck snapping for the violent slam of her head on the concrete ground. Losing Gwen/Emma Stone, the best thing in the movie, is tragic and heart-wrenching, and not just to Peter. Expected or not, inevitable it may be, no more Gwen in these movies sucks. It just plain sucks.

Far more shocking than Electro (I know, that's two now) is The Amazing Spider-Man 2's bizarre homages to past Superman and Batman movies. Spider-Man's stopping an armored car robbery by a mouth-foaming Russian mobster played Paul Giamatti is staged to have the same kind of Keystone Cops city-in-constant-chaos verve as the opening comedic scene of Richard Lester's Superman III. As for Batman, rather than drawing inspiration from Christopher Nolan's The Dark Knight as the previous The Amazing Spider-Man was accused of, director Marc Webb seems to have gone in the opposite direction and pulled from the reviled Joel Schumacher Batman movies. A visit to sad Max Dillon's home is just one Flaming Lips song away from outright mimicking seeing Edward Nygma's Riddler cave in Batman Forever. During a Times Square confrontation between Electro and Spider-Man, Webb goes full Schumacher mixed with Andrew Lloyd Webber. Giamatti, who later shows up at the denouement of The Amazing Spider-Man 2 in battle armor as the R.H.I.N.O., trades actually having a character for cartoonishly cackling like Tommy Lee Jones as Harvey Two Face. Spider-Man's New York City even has its own version of Arkham Asylum, with an evil scientist character so over the top, he would be at home trading cold puns or plant jokes with Mr. Freeze and Poison Ivy in Batman and Robin.

In no rush to move the story along, The Amazing Spider-Man 2 has Peter bounce from web-swinging romantic comedy with Gwen to tearful revelations with his hard-working Aunt May (Sally Field, a trooper) to uncomfortable male bonding with Harry to finally learning the truth about his missing parents and the secret of his father's scientific research into radioactive spiders. This mystery subplot about Peter's secret origin is something only Peter Parker finds particularly interesting but has been the unwelcome backbone of two Amazing Spider-Man movies. The Amazing Spider-Man 2 even opens with a prolonged action sequence of how the Parkers died in a plane crash that couldn't end fast enough and would have been best left out of the movie altogether. All the while, The Amazing Spider-Man 2 busily name drops J. Jonah Jameson (neither seen nor heard), and squeezes in a walk on for Felicity Jones as "Felicia," who may one day become the Black Cat but for now, enjoy her two empty scenes. Curious that  Shailene Woodley appearing as Mary Jane Watson was completely excised; surely there was room enough for MJ like there was for everything else, including a random little boy in a Spider-Man costume who faces down the R.H.I.N.O. until the real Spider-Man appears. The Amazing Spider-Man 2 will likely swing away with the No-Prize for the most interminable second act of any Marvel character movie, its bloated script trying the audience's patience with attempts at universe building that should make Iron Man 2's reviled second act seem like it's Iron Man 1. 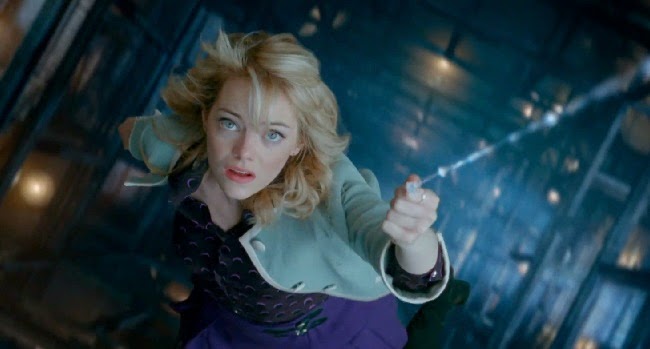 #TheAmazingSpiderMan2 blew its own teased sequel idea that would've been amazing: Spider-Man in England with Gwen hunting Jack the Ripper.
— John Orquiola (@BackoftheHead) May 3, 2014