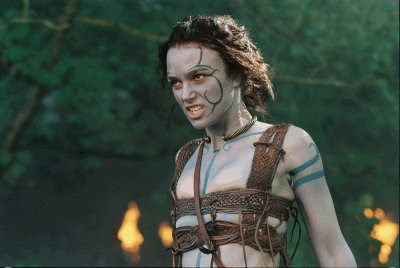 My Kingdom for a Horse
The beloved story of King Arthur, the Knights of the Round table and Camelot has been around for centuries, filtered through time and augmented with probably the most famous love triangle in literature, along with a magic sword, sorcerers, incest, the Holy Grail, blood, violence and all kinds of good stuff. Jerry Bruckheimer's King Arthur re-imagines the epic tale of the Once and Future King, and somewhere along the way the decision was made to keep the blood and violence and cut out the famous love triangle, the magic sword, sorcerers, incest, the Holy Grail and the rest of the good stuff. Then, likely after watching movies like Braveheart and Gladiator, another decision was made: Let's make our King Arthur movie like that, only more boring. The final stroke of genius: Let's have a horse narrate the story to the audience.

Clive Owen is King Arthur, a mopey, pouty Roman knight who defends the Roman interests in 5th century Britain from the native Woads ("Woad"? What's a "Woad"?) by keeping them on their side of Hadrian's Wall. The Woads are tall, angry Smurfs who live in the trees and have catapults but somehow haven't thought to use those catapults to knock the big wall down. Also, their leader is Merlin, who is said to be a magician but no, he isn't. Arthur has his Knights of the Round Table (Lancelot, Galahad, Gawain, Tristan, Charlie, and Bluto, as best as I could tell the names), who are all from different parts of the Roman Empire and of different faiths. Which faiths? The movie never says, although Lancelot believes in a story he heard as a boy that every knight's horse was once a knight that fell in battle reincarnated. (See where this is going...?)

The Knights of the Round Table fight until the day Rome officially discharges them. They look forward to the day they can go home from the godforsaken land they inhabit. But Rome has betrayed them; on the day they are to be discharged, they are instead forced into one more quest, to march right into Woad territory and rescue a Roman boy who may or may not be the next Pope, maybe. The Knights are pissed and so is Arthur. This mission is suicide, they feel. To march right into Woad territory just to find one Roman kid would surely mean death! But the Knights have to do their jobs even though it stinks. So off to the Woads they go. Meanwhile in the north come the evil Saxons, led by the evil Stellan Skarsgard's beard. Skarsgard wants Britain for himself and his beard won't stop until he has it.


After an overnight camping trip that was largely uneventful, Arthur and his knights arrive at the home of the Roman boy, his evil Roman father, and his indifferent Roman mother. These Romans have been lording it over the local people, converting them to Christianity one slave at a time. Arthur, a man who believes in the inherent right of all people to be free, finds all of this distressing and takes control of the situation. Uncovering a hidden torture chamber, he finds a lot of dead pagans, a young boy with a broken arm, and the hottest little Woad in Britain, Keira Knightley. Arthur packs them all up and marches them back to Hadrian's Wall, with the evil Saxons hot on their heels.

Then there's a betrayal, a battle, an even bigger battle, a surprising death, and then it's over. Somehow seven knights and a big pack of Woads killed thousands of Saxons using fire and catapults. By turning back the Saxons and working with the Woads, Arthur has united Britain and becomes their king. He also gets to marry Keira Knightley, a big bonus.

This is all well and good but it's not King Arthur. Who is this movie for? Anyone with knowledge of the story of King Arthur will walk away irritated or genuinely pissed off. Director Antoine Fuqua worked hard to create some violent battles but it's nothing we haven't seen before. There is one terrific sequence midway through involving Arthur, Guinevere, and the Knights taking on a battalion of Saxon barbarians on top of a frozen lake that was pretty exciting. But after the last few years of similar types of movies, there isn't much thrill left in seeing men on horses with swords and shields, clashing, blood drawn, limbs torn, battling to the death. It's all been done, and done better, elsewhere.

The perfomances ranged from wooden and disinterested (Arthur) to snarly (Skarsgard) to community theatre hyper-overacting (Ioan Gruffudd as Lancelot.) Gruffudd graduated from the Joseph Fiennes school of acting, over-emoting when it's not necessary and hammering his obvious feelings with lots of wild gestures. Skarsgard lets his beard to all the talking and acting. Some of the other Knights fare better. A good deal of time is spent getting to know the knights and they are engaging cookie cutter action figures. But man, is Arthur a bore. Clive Owen is too laid back and melancholy to be an action hero, much less a legendary king who inspires noble knights to fight and die for him. Keira Knightley stands before him, gorgeous and willing, and he smirks with disinterest. He'd rather frown than f -- uh, cuddle with her. There's no chemistry between them..
In King Arthur Guinevere is practically naked in leather straps, painted blue, and fights like a feral animal. There isn't quite enough of her practically naked in the leather straps while painted blue; it's only in one sequence towards the end, the big battle. Knightley is beautiful and stunning, but her Guinevere arrives halfway through the movie and hardly has anything to do besides pout, growl, and fight when called for. There are some goo goo eyes Lancelot sends her way, but the movie isn't much interested in exploring it and "re-imagines" a much different solution to the Arthurian love triangle and adultery problem.
This is no epic tale either. By jettisoning the Arthurian mythology, we end up with a much simpler, far duller story. The Knight's quest to save the Roman boy doesn't take more than a couple of days and getting in and out of Woad territory was hardly dangerous. The whole span of the story is maybe four days start to finish. The history is shoddy at best. And there are parts of the trailer that aren't in the movie at all. The scene where Arthur says "Excalibur, I am ready!" and where Merlin does magic and calls forth a storm - all gone. "Re-imagined" right out of the final cut.

It's tough pill to swallow that this long weekend of Romans fighting barbarians is the story "that inspired the legend of King Arthur" as the hype trumpets. Change the names of the characters and you have a good-looking but uninspired sword and horse action picture. It's decent action, but bad Arthur.

Okay, the talking horse. So Lancelot's voice narrates the whole story in the past tense, except Lancelot doesn't make it through for the sequel that ain't gonna happen. But remember, Lancelot believes that every knight who falls is reborn as a horse. Cut to a final shot of a white horse galloping, and we have our narrator, Mr. Ed.
Posted by Back of the Head at 10:37 AM