STREET FIGHTER: THE LEGEND OF CHUN-LI 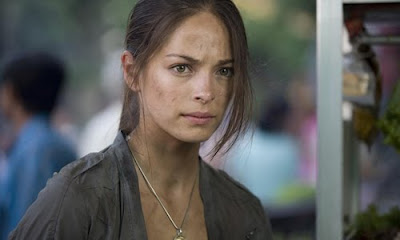 Street Fighter: The Legend of Chun-Li is a bewildering attempt to transport some of the characters in the Street Fighter video games, strip them of practically any resemblance to the game, and then set them in the real world of Hong Kong and Bangkok -- a "real world" where Chun-Li can still summon and hurl a swirling ball of energy at M. Bison. Virtually nothing about the story or the background of the characters makes sense, with especially huge holes surrounding Bison's back story. These include the source of his Irish brogue when he was born and raised in Bangkok and why he speaks to his estranged daughter in Thai when she wasn't. It's debatable which was more believable: the idea that beautiful little Kristin Kreuk is such a potent wu shu fighter that she can flatten five guys twice her size, or Chris Klein's two day beard growth and feigned, snarling, tough guy cop badassery. Spending a couple of hours watching Kristin Kreuk wander around Bangkok would have been more enjoyable if her quest to find her missing father via chop-socky nonsense stopped getting in the way. Jean-Claude Van Damme and Raul Julia screaming "GAME OVER!" were sorely missed.
Posted by Back of the Head at 3:58 PM 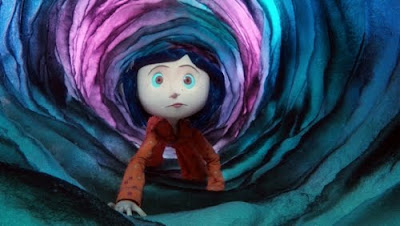 Held against the standard of Henry Selick's The Nightmare Before Christmas and Neil Gaiman's MirrorMask, Coraline doesn't quite measure up. The voice over work by Dakota Fanning as Coraline was very good, and the music was delightfully eerie. Yet both the stop motion animation and the story of a young girl going through a hole in a wall into a magical world too good to be true was done better in the previous films mentioned. Coraline was well-meaning but left me cold. I liked the cat, though.
Posted by Back of the Head at 12:53 PM 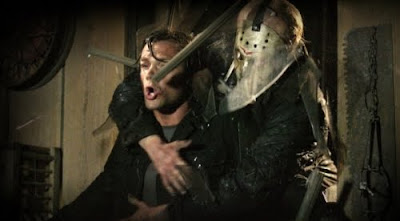 I have a lifelong history of not giving a rat's ass about the slasher movie genre in general and Friday the 13th in particular. This 2009 re-imagining doesn't reverse my position in any way. Having never sat through any of the previous (how many have their been? Ten? More?) Friday the 13ths in their entirety, the slasher genre's rules are still so ingrained and obvious, every move Jason made was predictable even before he would "suddenly" appear in frame. The kills were pretty uninspired and the ending is a cheat; appropriate for continuing the franchise but a slap in the face to the consistency of the story the movie told. The curious departure this Friday the 13th made was Jason taking a prisoner, whom he held in captivity for over 6 weeks. Despite being chained up in a dungeon for a month and a half, the girl in question looked reasonably clean and well-kept. Did Jason let her have bathroom breaks? Cook her meals? Give her an hour outside to get some exercise? Brush her teeth pearly white for her? Another big logic break was Jason somehow not killing a major character despite appearances; odd considering how efficiently he kills every one else. But who cares about logic in this genre? There was some fun stuff here and there, mainly in the breasts department. Julianna Guill is breathtaking. With so many ample racks on display (even Willa Ford's), Friday the 13th validated the beauty of the natural over the implant. Celebrated it gloriously, in fact. I also liked the token black kid using a frying pan as a shield. Marvel Studios is currently casting Captain America. Look no further. I did like this fast, athletic Jason, who moved like an athlete and could shoot a bow and arrow with Olympic precision. I also thought he looked better wearing a bag on his head in the early scenes before he donned the iconic hockey mask. Finally, a pleasant surprise for the Star Trek nerds in the audience (yo!) is the cameo of who plays Jason Voorhee's mother. Major Kira, how could you?
Posted by Back of the Head at 12:51 PM

The problem with Push is that it's incoherent at the screenplay level. Push introduces a world where hundreds of telekinetics and various forms of psychics are pursued by a shadowy government agency called Division, which employs their own telekinetics and psychics. These men and women are categorized by their one specific ability with words like Pusher, Watcher, Mover, Bleeder, Screamer, Gouger, Scrounger, Flounder, and other words that end in 'er' - I lost track. The characters are all running around day-glo, colorful Hong Kong chasing after a MacGuffan, in this case a syringe that when injected could make a psychic even more powerful, except it has a 99% death rate. Those are shitty odds. Why they wanted this syringe so much, I couldn't fathom. A cast of actors I quite like - Chris Evans, Dakota Fanning, Camilla Belle, Djimon Hounsou, Chris Curtis (having a Sunshine reunion with Evans I rather enjoyed) - don't seem to make much more sense of the story than the audience but they're pretty game anyway. Fanning and Evans quickly developed an easy big brother/little sister chemistry that comprises the most enjoyable aspect of Push. Belle is a pretty cypher with one facial expression and almost no dialogue. The telekinetic battle scenes are pretty good, the action is bloody and super violent (Belle even gets punched right in the babymaker), but the Watchers' seeing the future and drawing it is straight out of Heroes. There's also a lot of irritating talk where the Watchers keep taunting that they know how each other will die but they end up wrong, so how useful is their clairvoyance? Still, I thought Push was fun to watch moment-to-moment even though I didn't care what was happening. I might even be interested in the Push sequel they shamelessly teased at the end.
Posted by Back of the Head at 4:46 PM 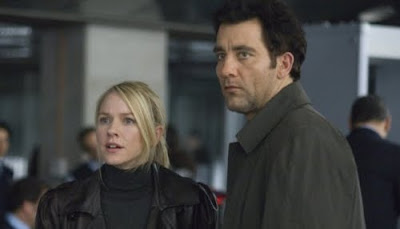 About a third of the way into The International, some blah blah exposition occurs where we learn this whole picture is about an international bank trying to broker an arms deal into the Middle East. At this point, I decided "this doesn't concern me. I don't care." But there was still 90 minutes to go. The International lives up to its billing with some sweet location shots of Berlin, Luxemburg, Istanbul, and New York. Clive Owen plays a blood-stained Interpol agent trying to bring down the bank with his glower power. Almost as an apology to the audience for all the thin-lipped European men making secret deals in gun metal grey offices, The International stages a wildly bloody shoot-em-up sequence in the Guggenheim where the blood flows out of wounded men like geysers. The only thing almost as out of control as the squibs was all the philosophizing in the screenplay. Every character had some hackeyed code of living they would drop to each other like: "When there's no way out, the best thing to do is go deeper", "Sometimes we find our destiny on the road we take to avoid it," and "In life you have to know which bridge to cross and which bridge to burn." There were at least a half dozen more fortune cookies like those. I might have been able to pay more attention to the complex plot ripe with betrayal but every time Naomi Watts was on the screen, I was mesmerized by her lustrous blonde hair, pulled tightly in a pony tail but with the bangs on the left side framing her face just so. Stunning, stunning hair. I wanted to bathe in it. I'll bet her hair had its own animatics in pre-viz.
Posted by Back of the Head at 12:49 PM 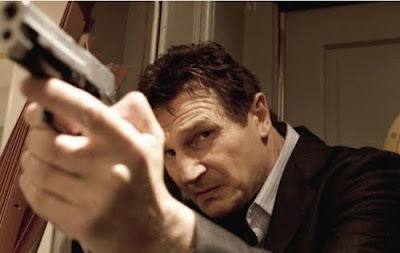 Taken stars Liam Neeson as the World's Greatest Dad. When his daughter is kidnapped in Paris and sold into sex slavery, Neeson, a retired government operative, goes ballistic and stops at nothing to find her and those responsible. Taken is basically a two hour version of 24 season one set in Paris with Neeson as Jack Bauer and Maggie Grace as Kim Bauer. There's even a small role for Xander Berkley, who played George Mason on 24, as Grace's wealthy stepdad. I half suspected Nina Myers was behind Grace's abduction. As Neeson searches for his daughter, cutting a path of destruction across half of Paris, killing Albanian gangsters, foreign businessmen, and even a Sheik, Taken becomes more and more implausible and preposterous. But Taken is also an entertaining B action movie that's hugely satisfying on a visceral level. The weirdest thing was Grace, a 25 year old, playing a 17 year old so naive and sheltered, she behaves more like she's 13. She's rich enough for an all-expense paid trip to live in Paris but wears a demin jacket that's been worked over by a Bedazzler. There's a subplot that opens Taken where Neeson is a part-time bodyguard for a pop star and gets her help in possibly starting his daughter on a pop singing career. Wanting his daughter to be a pop star is the one big tarnish on Neeson's perfect-dadditude. After all, look how Britney Spears turned out.
Posted by Back of the Head at 5:24 PM