The Lost City of Z

THE LOST CITY OF Z

In The Lost City of Z, Charlie Hunnam, a British Major strangely undecorated despite achieving that rank, is summoned to the Racist Royal Geographical Society by Emperor Palpatine himself (Ian McDiarmid). It is 1906, Europe is on the brink of the First World War, but Palpatine has a strange offer for Hunnam: go to the jungles of Amazonia between Bolivia and Brazil and survey the border between the two countries to prevent a war between them. Palpatine doesn't sugarcoat this sweetheart deal: "There will be terrible sickness, murderous savages, and you'll be gone for years." If he succeeds and, you know, lives, Hunnam gets a medal. Naturally, Hunnam jumps at the opportunity. He leaves behind his pregnant wife Sienna Miller, his young son, and heads to the jungle.

Dressed like Brian Fellows from Saturday Night Live and with an unrecognizable Rob Pattinson along for the journey, Hunnam's adventures in Amazonia involve floating on a rickety wooden raft, getting shot at by spears and arrows by "the Indians" who are all terrible shots, and finding pieces of pottery in the jungle. That last part is most significant; Hunnam realizes the tales of Conquistadors past who wrote about a fabled "lost city of gold" must be true. Hunnam doesn't stick around the jungle to keep looking for the city, though. He goes back to England to a hero's welcome and, in the movie's best scene, Hunnam stands in front of the assembled talking heads of the Racist Royal Geographical Society and argues that they must find the "Lost City of Zed" (they pronounce Z 'Zed' because British). Hunnam gets his expedition funded and back to Amazonia he goes, where he does not find the Lost City of Z and returns to England empty handed, just in time to be sent to World War I and nearly die after being gassed in the Battle of Somme.

Hunnan actually ventures into the jungle three times in Lost City of Z. Three times! Does he find the Lost City of Z? No, he does not. The movie takes place between 1906 and the 1920s, and by the third expedition, Hunnam brings along his grown son, Spider-Man (Tom Holland). Despite all of these walkabouts in Amazonia where the real Charlie Hunnam Leftenant Colonel Percy Fawcett spent years and years in the jungle searching for the Lost City, the movie itself doesn't even spend an hour of screen time in the jungle. Indiana Jones spent more screen time in the jungle in Kingdom of the Crystal Skull. This true story tragically ends with Hunnam and son lost in Amazonia; they are never heard from again and the movie never shows us the Lost City. This is a gigantic ripoff. You know what? It doesn't matter what actually happened. This is a movie and there are rules to movies. By the third fucking time Hunnam goes into the fucking jungle, the audience deserved to see the fucking Lost City of Z. Even the stupid flying saucer Indiana Jones saw is better than no payoff at all.
Posted by Back of the Head at 5:02 PM

Obviously, I love Batman. And I love The Dark Knight Trilogy, which for me, personally, is a definitive interpretation of Batman.
— John Orquiola (@BackoftheHead) April 13, 2017

One of the things I love about The Dark Knight Trilogy is it communicates the underlying theme that Batman is actually a pretty dumb idea.
— John Orquiola (@BackoftheHead) April 13, 2017

Most of the characters in The Dark Knight Trilogy communicate to Bruce Wayne in some way that Batman is a dumb idea.
— John Orquiola (@BackoftheHead) April 13, 2017

Starting with Alfred. From the day he picked Bruce up via plane after 7 years to the day Bruce fired him, he always said Batman was dumb.
— John Orquiola (@BackoftheHead) April 13, 2017

Lucius Fox thought Batman was dumb, but enabled Bruce. Ra's al Ghul made fun of Bruce when he saw him in the Batman suit.
— John Orquiola (@BackoftheHead) April 13, 2017

Harvey Dent: "Whoever he is, he doesn't want to be Batman forever. Why would he?" Right. Because that would be dumb.
— John Orquiola (@BackoftheHead) April 13, 2017

Right down to Bane, who also made fun of Batman relentlessly while he beat him up and broke his back. They all agree Batman is dumb.
— John Orquiola (@BackoftheHead) April 13, 2017

Eventually, Bruce got the hint. He realized the only not dumb thing to do was quit being Batman. Left it to some other dumb ass to try.
— John Orquiola (@BackoftheHead) April 13, 2017

And that's the moral of The Dark Knight Trilogy, the greatest Batman films of all time.
— John Orquiola (@BackoftheHead) April 13, 2017

Ghost in the Shell Sample Scene 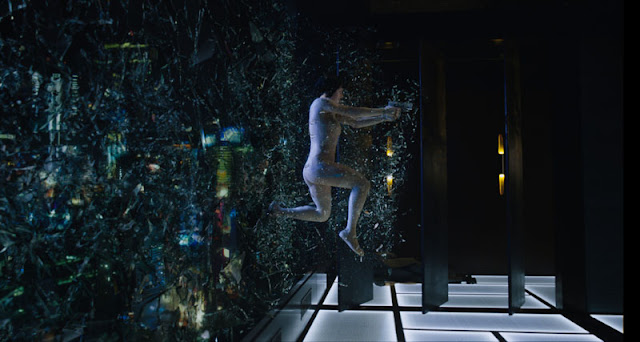 My rewrite of the key opening scene of Ghost in the Shell.


MICHAEL WINCOTT
Thanks for coming to this business dinner, Africans. We want to sell you robots. Hanka has had great success putting Japanese Ghosts in Caucasian Shells.

AFRICAN BUSINESS MAN
What do you mean 'great success'? We looked at your books. In 99 tries, you only made 1 that worked.

MICHAEL WINCOTT
Yes, but she's hot. She's about to burst in here and save your lives.

AFRICAN BUSINESS MAN
No, she won't. She'll be too late diving off the roof. We'll already be dead when she gets here.

MICHAEL WINCOTT
Yes. Well. We'd better make that deal now, then. Would you be interested in deep-diving a geisha?