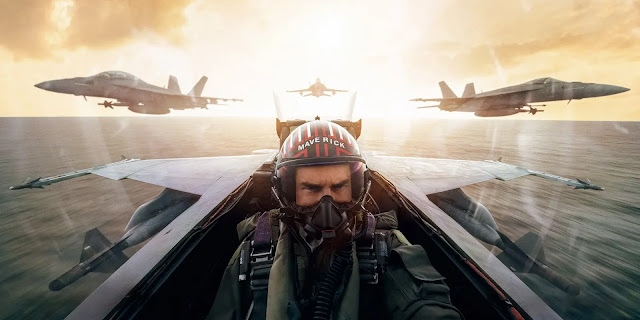 Top Gun: Maverick is a master class in the lost art of Hollywood blockbuster filmmaking. In an age of endless CGI superhero movies and films that feel smaller and smaller to fit in digital devices and compete with streaming TV shows, director Joseph Kosinski and Tom Cruise welcome us back to The Movies. Top Gun: Maverick, which was shot with IMAX cameras and with no computer-generated effects, brings a revolutionary verisimilitude to the Navy's aerial combat. Top Gun: Maverick boasts the most breathtaking aerial photography and some of the greatest action ever captured on film. The need for speed is fulfilled and then some because Top Gun: Maverick was born to thrill us - and it does.

Of course, Cruise is back as Captain Pete "Maverick" Mitchell, who graduated second in his class at Top Gun in 1986 ("I just want to manage expectations," Maverick reminds us with his trademark grin), and is tapped to teach a new generation of pilots who are "the best of the best." Maverick returned to Top Gun at the end of the first film to become an instructor, but we learn in the sequel that he washed out after two months. Maverick spent the next 35 years alternately garnering commendations for his excellence in the cockpit and nearly getting bounced out of the Navy multiple times for insubordination and recklessness. When Top Gun: Maverick begins, Pete is a test pilot for the Darkstar program - the 21st century Chuck Yaeger - and he violates orders (of course) to prove he can shatter the Mach 10 barrier. Shatter it he does - Maverick achieves Mach 10.3 and becomes "the fastest man alive" - before his aircraft explodes. This is the last straw says Admiral Cain (Ed Harris), the first of a series of flag officers in the film who want Maverick shitcanned from the Navy. But instead, Maverick is assigned back to Top Gun to teach a group of graduate aces how to perform, shall we say, an impossible mission. (No surprise that Cruise's Mission: Impossible director, Christopher McQuarrie, is a co-screenwriter on Top Gun: Maverick.)

Maverick meets the new hotshots who he's meant to distill all of his aerial combat knowledge into: there's Hangman (Glen Powell), the handsome, cocksure Iceman of the bunch. There's Phoenix (Monica Barbaro), the first female Top Gun pilot in the series. There's Bob (Lewis Pullman), Phoenix's version of Goose (Anthony Edwards) with the worst callsign. There's also Payback (Jay Ellis), Fanboy (Danny Ramirez), and Fritz (Manny Jacinto). Last but not least, there's Rooster (Miles Teller), the son of Goose, who has a bone to pick with Maverick over his father's death in the original Top Gun. Maverick also has another secret he's keeping from Rooster, but if you think after butting heads the entire movie that Maverick and Rooster don't bond over their extraordinary fighter jock heroics by the end of the film, you must have never seen a movie before. Of course, Maverick needs a love interest since Charlie (Kelly McGillis) no longer fits the bill. Enter Jennifer Connelly as Penny, a former flame of Maverick's who lights that torch again as soon as they lay eyes on each other. Connelly is dazzling in a nothing part that she completely carries with her beauty and charisma. Last but not least there's Vice Admiral Beau "Cyclone" Simpson (Jon Hamm), Maverick's new commander at Top Gun whose job is to despise Maverick and be wrong about him every step of the way. Hamm sneers his way through a thankless role but he still seems like he's enjoying himself.

The impossible mission Maverick trains the Top Gun class of 2022 for is the destruction of an underground uranium facility in some unnamed country that could render the land radioactive, or something. Top Gun: Maverick curiously never identifies who the enemy is or why, just that they're somehow technologically superior to the Navy's F-18s. But having a faceless enemy of no nationality allows Top Gun: Maverick to play worldwide and rake in cash without offending anyone politically. Now, to destroy the Death Star, pardon, the uranium facility, the pilots have to fly dangerously low through a valley in two minutes and 30 seconds, hit a target 3 meters wide with pinpoint accuracy, and then achieve a perilous 9.5-g climb without hitting a mountain, blacking out from the pressure, or using the Force. And once they achieve that, the hard part begins: surviving a dogfight with the enemy's 5th generation fighters. Admiral Jon Hamm says it's impossible. The trainees think it's impossible. Of course, Maverick does it in the simulation on the first try, so he gets tapped to lead the mission himself. How does Mav keep getting into these messes?

Top Gun: Maverick does explain the reason why Maverick keeps getting out of messes. He has a guardian angel: 4-star Admiral Tom "Iceman" Kazansky (Val Kilmer), the only character from the original Top Gun to return in the flesh (as opposed to unnecessary flashbacks). Iceman loathed Maverick for being dangerous in Top Gun, but after Maverick saved him and made history by becoming the first American pilot to shoot down 3 Russian MiG fighters, Iceman became Maverick's wingman for life. The way Top Gun: Maverick honors Iceman and Val Kilmer is the most heartwarming moment of the film. Kilmer survived throat cancer but at the cost of his voice and appearance. Top Gun: Maverick gives Iceman the same affliction so that he has to text Mav to communicate, but the film also gives him a beautiful and resonant scene where Iceman and Maverick reflect on being the last of the best together. When Iceman finally passes away, Maverick loses his protection and the Navy declares open season on court martialing him until Captain Mitchell proves Iceman's lifelong belief that "the Navy needs Maverick" right once again.

Much of Top Gun: Maverick is spent pretty much kicking the shit out of Maverick. The amount of disdain he endures is shocking. Maverick is literally tossed on his ass out of a bar, called "a relic" and even worse names, has his value to the Navy constantly questioned, and even Penny sticks him with a thousand-dollar bar tab for no reason other than to be mean to him. Maverick does have a couple of loyal friends on his side, both black guys: Hondo (Bashir Salahuddin), his Chief Warrant Officer, and Warlock (Charles Parnell), an Admiral who actually thinks Maverick is pretty great. Top Gun: Maverick is a savvy examination of both Maverick's enduring skills as a pilot and of Tom Cruise's enduring appeal and stature as the last real movie star in the world. In many ways, Cruise and Maverick are one and the same and Top Gun, not Mission: Impossible, is his signature role. Top Gun: Maverick plays smartly with Tom Cruise's age, and then completely ignores it when he's in the cockpit, bringing the best of both Cruise and Maverick to the fore.

Most of all, Maverick captures and emboldens the endless appeal of Top Gun. Everything iconic about Top Gun is back, including the volleyball scene, which becomes a beach football scene with Maverick grinning ear-to-ear behind his aviators, and, most importantly, the indelible "Top Gun Anthem" and music by Harold Faltermeyer (Hans Zimmer and Lady Gaga provide additional music). Every step of the way, your mind is aware of the manipulation, of being played like a fiddle, but it's so much fun, who cares? Top Gun's central idea of "the best of the best" captured the imaginations of a generation in the 1980s and the bigger, bolder Top Gun: Maverick shows that it all still works like gangbusters today. Top Gun is the pursuit of an impossible ideal, which is embodied by Maverick, and his victories are our victories, his need for speed is ours as well. Top Gun: Maverick is an emotional, visceral, stratospheric thrill ride and one of the best pure movie experiences of this generation.