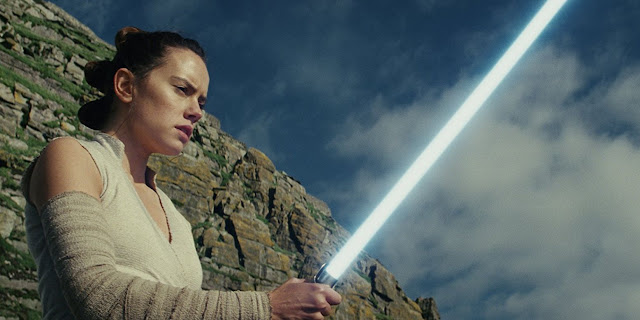 "This isn't gonna end the way you think," Luke Skywalker (Mark Hamill) admonishes Rey (Daisy Ridley). Indeed, this line is both a challenge and a primer to the audience from writer-director Rian Johnson, the once and future steward of Star Wars. With Star Wars: The Last Jedi, Johnson takes the lightsaber from J.J. Abrams' The Force Awakens (and will pass it right back to Abrams for Episode IX) and crafts his continuation of the story of both the new guard of the saga, Rey, Finn (John Boyega), Poe Dameron (Oscar Isaac), and Kylo Ren (Adam Driver) and the old, the Skywalker twins Luke and Princess Leia (Carrie Fisher). The result is a grand, unwieldy, inspiring, endlessly surprising, weird, but uplifting Star Wars for the ages.

"There's something inside me that's always been there. Now it's awake. And I'm scared," Rey admits to Luke with her unique brand of endearing honesty. She tells the old Jedi Master she has come to return him to his sister Leia so he can save the Resistance in their time of greatest need. Luke has other ideas: "I came to this island to die." And with him, he hopes, will die the ancient Jedi order, the source of so much of the Galaxy's greatest failures. Rey is really on the isolated island of Ahch-To for a personal reason: she wants Luke to train her to be a Jedi. Luke refuses, despite Rey pointing out: "I've seen your daily routine. You're not busy." Rey does get her training, to a degree, but her indoctrination into the mystic arts of the Jedi is less about "moving rocks" but more about understanding the importance of the choices she makes. As the welcome sight of Yoda (Frank Oz) - Empire Strikes Back edition - tells "Young Skywalker" when they burn the last of the ancient Jedi tomes, "There's nothing in those books that isn't already inside her."

Being a Jedi was never about your lightsaber color, or your ability "to control people" (how Rey described the Force to Luke). It was about choices, and ultimately, poor choices and an inability to see the big picture is what doomed the Jedi and the Galaxy for a long time. Rey's lessons on Ahch-To were less about learning cool new Force tricks as it was uncovering the truth behind Luke's choice to isolate himself from the Force and hide from the Galaxy - his greatest failure: Kylo Ren. Luke has a certain point of view about how Kylo turned to the Dark Side and destroyed Luke's fledgling new Jedi Order; Kylo, through a mental Force communion with Rey, has his own point of view: Luke tried to murder him and drove him to Supreme Leader Snoke (Andy Serkis). The truth is somewhere in the middle, mired in Luke Skywalker's eternal weakness as Yoda once told Young Skywalker: "I sense much fear in you." Luke's fear of his nephew Ben Solo's potential drove him to make a fatal mistake. But in the end, they made the choices they made and they are who they are because of them.

The Last Jedi also wisely speaks to Luke Skywalker's legend, and how legends are always crafted around imperfect people. The truth never quite lives up. Luke scoffed at the idea that he would just march back into the fight, "laser sword" in hand, and stand up to the First Order. (Which is exactly what he does in the fantastic final moments of the film). Meanwhile, Rey believes in the legend, so much that The Last Jedi goes full on into a homage of Return of the Jedi, with Rey allowing herself to get captured and brought in front of Snoke, hoping she can turn Kylo Ren back to the good side and become Ben Solo again. This leads to a series of genuinely shocking moments as Snoke suddenly and unwittingly is beside himself, and Rey and Kylo fight side by side against the Praetorian Guard in possibly the best lightsaber battle in the saga's history. But in the end Rey and Kylo are who they are - she remains unwaveringly good while he is indeed the monster she says he is. Despite their bond through the Force, they are enemies and will be until they face each other one final time.

Meanwhile, there is a whole other movie going on. The Resistance is all but doomed as the First Order chases them around the Galaxy in a head-scratcher of a space chase that lasts almost the entire movie. This involves several desperate gambles, including Finn and his new friend Rose (Kelly Marie Tran) going on a side mission to the casino planet Canto Bight to find a code breaker (Benicio Del Toro) who can get them into Snoke's Star Destroyer so they can destroy a Flux Capacitor - or something? The important thing is Finn once more gets to confront and have a final duel with Captain Phasma (Gwendoline Christie), facing and overcoming his greatest fear once and for all. Poe Dameron gets a huge amount of screen time as he leads a mutiny to take control of the Resistance from Admiral Holdo (Laura Dern) when Leia is incapacitated and learns the limits of being a headstrong, impulsive fighter jockey.

The Force Awakens effectively turned the saga over to our new heroes Rey, Finn and Poe, but The Last Jedi shows us that the new kids still have a lot to learn. None of the gambits the new generation tries actually pan out. Rey is unable to turn Kylo Ren. Finn and Rose went through the entire Canto Bight sequence for nothing as they couldn't shut down the Flux Capacitor and are captured. Poe's mutiny was easily foiled by Leia herself, who asserts that the old generation still has aces up their sleeves - watch and learn, kids. Leia and Holdo, whom Poe mistrusted, came up with a scheme to deliver the Resistance to a temporary sanctuary on the salt world of Crait. Holdo's sacrifice ramming the Resistance ship into Snoke's ship is what saved the Resistance. And Luke Skywalker finally returned to the fight, bidding his twin sister a sweet farewell, and confronting his former student Kylo Ren with a new bag of awesome Force tricks we've never seen before. There is still much to be learned from the generation who we now say goodbye to (RIP, Princess Carrie), and though the family is reunited on the Millennium Falcon at the end, the future of the Rebels and of the Galaxy is more precarious than ever. Episode IX will be the final test to see if Rey, Finn, Poe, and Rose really have what it takes to save the Galaxy on their own.

As for the mystery of Rey's parents, the truth is strangely satisfying. Two years of debating her lineage (is she a Skywalker or a Kenobi?) was for naught. She is no one special. Her parents are "filthy junk traders who sold and abandoned her. They're probably dead in a pauper's grave." As Kylo tells her, "You don't have a place in this story." Which is the most powerful possible choice. Rey is told she's "no one special" because she's not tied to any characters, but that's exactly what makes her special. She was chosen by the Force to be something new, to craft her own role in this story. It's a tribute to how unwaveringly good Rey is that she is never tempted to turn to the Dark Side. She can't do what Luke did because she isn't Luke. She is Rey, and she will be who she is and what she chooses to be. A new kind of Jedi for whatever the Galaxy will become next.

While awkwardly paced as the longest Star Wars film ever, The Last Jedi nonetheless boasts the best third act of any Star Wars movie and delivers several truly "HOLY SHIT" moments. By my count, they are Leia surviving death in the vacuum of space by the will of the Force; Holdo jumping to lightspeed THROUGH Snoke's ship and slicing it in half; Snoke himself being sliced in half by Kylo Ren (Unkar Plutt's famous line "One half portion!" now applies to Snoke); Rey and Kylo fighting together as if they'd been teammates their whole lives; and Luke Skywalker unleashing the awesome power of the Force on Kylo Ren and the First Order with the greatest mind trick he ever pulled. The Last Jedi bids his final breath in The Last Jedi, but both old Skywalkers go out in magnificent fashion, the film honoring their legacy and importance to the Star Wars saga. What happens now is the biggest question in the Galaxy, but The Last Jedi not only reshuffled the deck but tossed all the cards in the air so they're blown by the wind. The contrivances and outright strange aspects of Johnson's film are held together by the sheer charisma of Ridley, Boyega, Isaac, Driver, Fisher, BB-8, and Hamill and the good will we maintain for them throughout.

"Let go of the past," Kylo tells Rey. "Kill it if you have to." The Last Jedi does its best to do just that, unshackling the saga as much as it can from the old characters, tropes, and traditions and even the old ways of what we thought the Force can do. Now, this new Star Wars trilogy probably won't end the way anyone thinks and that should ultimately prove to be a very good thing. We hope. And with that, it's time for this The Last Jedi review to end.
Posted by Back of the Head at 8:55 AM