TERMINATOR 3: RISE OF THE MACHINES

Arnold is indeed back and while, even in his 50's, he does physically look like the Terminator of old, this new Terminator sure does talk a lot. The bulk of the exposition in this film is doled out to Arnold, who drones on and on about the plot of the movie. This is not the same Terminator that young John Connor taught to say "Hasta la vista, baby." This Terminator never grew to understand why humans cry. (There is a funny line by Connor: "Great! Now I have to teach you all over again!" Unfortunately the movie never made the time.) However, someone apparently took the time to install a "how to quip in action movies" program in the new Terminator. This new Terminator has a ready database of bad action movie cliché jokes. The barrage of one-liners and would-be catchphrases ("She'll be back." "I'm back." "You're terminated.") grew to be irritating.
Late in T3, the TX literally kicks the Terminator's head off in their battle. When the Terminator rebooted after the T-1000 overloaded its system in T2, it was a moving scene, as if the Terminator was reborn from the dead. In T3, the Terminator simply screws his head back on, business as usual. His later reboot and mission restatement in order to save John and Kate from the TX was unfortunately lacking emotional impact. In T2, James Cameron took great pains in developing the Terminator's growth as a character from his interaction with young John Connor, to the point where his "I need a vacation" line after destroying the T-1000 was a dose of humanity the Terminator well-earned. T3 pales in comparison.
Perhaps the most glaring omission in T3 is the lack of a score. The familiar Terminator fanfare plays over the closing credits, almost too little, too late. Most of the movie plays without a musical soundtrack of any type. This robbed the action and chase sequences of a good deal of visceral impact. Similarly, the opening credits, which in a Terminator film should be ominous and moving, were simple and non-descript. All in all, very disappointing in that respect. Without music, a movie feels incomplete, and T3 is no exception.
I think Terminator 3: Rise of the Machines is ultimately as good a Terminator movie as could be made without James Cameron's guiding vision. I was more disappointed with the execution and details of the picture than I was with the overall story told. As a jumpstart to the franchise, it does what it sets out to do and more Terminator movies can indeed be made after this, unless T3's box office tally proves otherwise. While I'm sure James Cameron is happy that his good friend Arnold is indeed back in the role that made him a superstar, I wonder if deep down he hates Terminator 3. I kind of hope he does**. And I hope he's so motivated that he finally returns from his Titanically long exile and directs another movie. James Cameron is the one who I really want back.


** In an interview, James Cameron indicated that he in fact "loved" Terminator 3. Bah.
Posted by Back of the Head at 6:41 PM 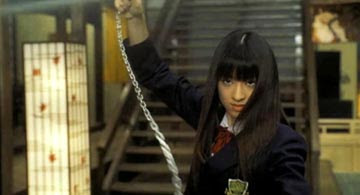