** SPOILERS **
"Thank you for your consideration."
To read Suzanne Collins' "The Hunger Games" trilogy is to develop a personal relationship with - and deep, genuine love of - its heroic teenage protagonist, Katniss Everdeen. The world Katniss inhabits, Panem (Latin for "bread"), a post-apocalyptic North America divided into 13 ravaged Districts ruled over by a malevolent Capitol, is seen entirely through Katniss' eyes and point of view. We live with Katniss, hunt with her, fight with her, cry with her, suffer with her, mourn with her, and triumph with her as she is thrust into a televised fight to the death against 23 other teenagers in an annual "pageant" called The Hunger Games. Director Gary Ross' hotly anticipated The Hunger Games feature film ultimately succeeds as an adaptation of the novel, though it is burdened by a constant, at times even brutal battle between what's captured on screen and what is in the mind's eye of the audience who loves the books.
The Hunger Games starts off oddly, in almost dampened fashion. Once the premise is established, the early scenes present District 12 as monochromatic and muted, almost lifeless. The hustle and bustle of people just living their lives and struggling to get by one imagines when reading is replaced with empty, dusty roads and pallid faces huddling in their shanties or trudging to the coal mines. The Hunger Games begins to build momentum when Katniss and Peeta Mellark (Josh Hutcherson) are whisked off to the Capitol, a futuristic city where it seems Paris Fashion Week has run amok, encounter their drunken but kind-hearted mentor Haymitch Abernathy (Woody Harrelson), and begin training for the Arena. Katniss' relationship with her stylist Cinna (Lenny Kravitz, the most welcome presence of the supporting cast) is spot-on in how he supports and empowers her. ("Katniss Everdeen, are you gonna go my way?") Stanley Tucci contributes flamboyant wit and pizzazz as ever-grinning talk show host Caesar Flickerman. Once Katniss is in the Arena, The Hunger Games goes for broke, not shying away from the horrific violence of children slaughtering children but doing its best to level the disturbing impact.
A big surprise of The Hunger Games is the shifting of prominence of key supporting characters. The novels give credence to Gale Hawthrone (Liam Hemsworth), Katniss' best friend and closest ally in District 12, that is almost entirely missing from the film. Gale is reduced to a few reaction shots and jealous discomfort as he watches Katniss fight in the Games and put on a romantic "showmance" with Peeta, the baker's son who always loved her. The memorable Effie Trinkett (Elizabeth Banks) becomes merely an fleeting collection of bon mots and a punching bag for Haymitch's quips. Other characters, like Katniss' mother (Paula Malcomson), feel like blanks on the screen.

Meanwhile, Seneca Crane (Wes Bentley, giving his best performance since American Beauty), the Gamesmaker responsible for designing The Hunger Games' Arena, curiously emerges as one of the movie's most pivotal characters. The Hunger Games cannily opens up the narrative beyond Katniss' point of view and gives us scenes between Crane and the fearsome President Snow (Donald Sutherland) which accentuate the themes of the story and plant seeds for the sequels. Crane's demise, only hinted at in "Catching Fire", is ironic and impactful. It's a shame Seneca Crane didn't animate a floating plastic bag in the Arena and then burst into tears about how beautiful it is.
First and foremost, The Hunger Games belongs to its star. In Jennifer Lawrence, Gary Ross found the right actress to portray Katniss. Honestly, Lawrence looks nothing like the Katniss my mind's eye envisioned, but having experienced her portrayal of the "Girl on Fire", she has defined the role. Lawrence owns The Hunger Games; she is on screen 99% of the time, as she should be, vociferously embodying all of Katniss' complex emotions, vulnerabilities, humanity, and her steel core of heroism. (Not to mention Lawrence has the best snarls maybe in the history of movies.) Ross' camera lovingly captures Lawrence's beauty, especially lingering on her lips as the bowstring of an arrow about to be launched is pressed against them.

Lawrence performs with startling verisimilitude, especially in the minutes before Katniss enters the Arena, when she hugs Cinna goodbye and is gripped with palpable fear. We feel her anguish when Katniss volunteers to take her beloved little sister Prim's (Willow Shields) place in the Games, and when she has to bury young Rue (Amandla Stenberg) in the Arena. Katniss laments not being "likeable", but we cheer her heartily when she shoots an arrow at the Gamesmakers to force their attention (and then curtsy bows) and when she survives terrifying fire bombings, multiple attacks, and searing injuries in the Arena. Lawrence delivers a magnificent Best Actress-caliber performance that will likely, and unfairly, go unrecognized during the 2012 awards season. Regardless of awards and accolades, Jennifer Lawrence is Katniss Everdeen, the Katniss fans of the novels deserve. She's for real.
Posted by Back of the Head at 9:07 AM 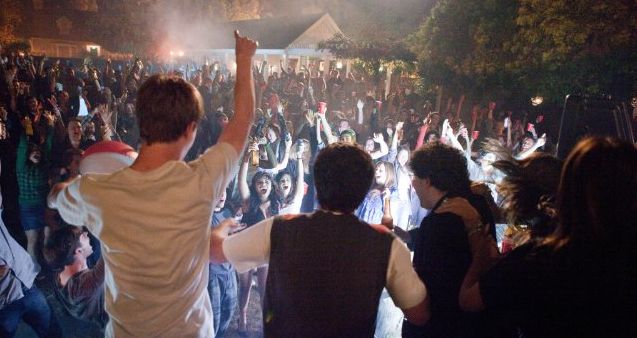 ** SPOILERS **
Project X marks the spot. A "found footage" film loosely based on a real party a teenager threw in Australia, Project X is produced by Todd Phillips, director of The Hangover. At its most raucously raunchy best, Project X is like the closing credits of The Hangover come to life. Three "loser" (and this is coming from one of their dads) high school seniors in Pasadena set out to "change the game" and make a name for themselves by throwing the most epic party ever. God bless 'em, they succeed, with catastrophic results. Thomas Mann, the well-meaning birthday boy, is flanked by his incredibly obnoxious but dedicated and loyal best friend Oliver Cooper, their heavyset hornball sidekick Jonathan Daniel Brown, and strange but unflappable camera man Dax Flame. Through aggressive new media marketing and a lot of chutzpah (because, as he repeatedly points out, he's from Queens and they know how to party in Queens), Cooper somehow gets a couple of thousand raging party goers to show up at Thomas' affluent house while his parents are away on their anniversary. Debauchery, mayhem, chaos and copious helpings of nudity ensue. Project X's pace cannily echoes the ebb and flow of a real party: a slow start involving preparation and worry (the two 12 year old security guards Cooper hires are scene-stealers), bursts of excitement when the party gets going, highs and lows, checking in on people you know and how they're enjoying themselves, and then balls to the wall insanity as alcohol and drugs get everyone fucked up. Then the party really kicks into high gear. The steady escalation of events is Project X's masterstroke of plotting and pacing, with everything getting out of hand to the Nth degree. The bonzo third act is so unreal and out of control, it even makes the super powered smash up of downtown Seattle in Chronicle seem like a reasonable series of events. Through it all, Thomas tries to minimize the damage to his parents' house while simultaneously juggling his lifelong crush on beautiful blonde Kirby Bliss Blanton with his attempting to nail gorgeous raven-haired Alexis Knapp. In regards to the latter, one would love Thomas' problems. But in the harsh light of the morning after the party, you wouldn't want to be in Thomas's shoes, though his stern father's reaction to his son's escapades is eyebrow-raisingly funny. You stagger out of Project X feeling like you actually were at that party, and man, it was fucked up! In the best way. Except for that dwarf who punched everyone in the balls. But even then. One could easily poke holes at the logic of Project X and the conceit of its "found footage" format, but I was having too much fun to care. Thanks, Project X, for throwing such an epic party. I had an awesome time. And Happy Birthday, Thomas!
Posted by Back of the Head at 2:03 PM

Should Batman Kill The Joker? 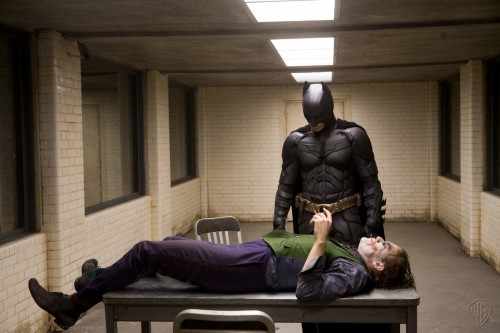 This essay, Why Batman Should Kill The Joker  has made the rounds of the comic book related websites I visit. It's not a new topic for debate, and certainly it's one I've occasionally pondered in my years of reading Batman comics and watching Batman in other media.


The kneejerk reaction is usually: No, Batman shouldn't kill the Joker. Because Batman doesn't kill. He has established moral and ethical principles, borne out of the urban violence that killed his parents and set him on the path to create and become Batman. (Never mind that in his earliest incarnation, Batman did kill, and he used a gun, but that's been retconned out of what is now the established and universally embraced impressions of Who Batman Is.)

One can argue that if Batman kills The Joker, he not only loses his moral high ground and his deepest held principles, but he basically starts down a slippery slope. Does he start killing all of his enemies? Does he kill Penguin, Poison Ivy, Catwoman, Mr. Freeze? That's actually kind of unthinkable, or it is to me. My conception of Batman just doesn't have room for the idea of Batman as executioner. I find The Punisher, for example, kind of abhorrent. Batman's values and principles are what make him heroic and admirable.

But one can also argue The Joker is a special case. The Joker is the absolute worst. I would be comfortable in saying, in DC Comics, The Joker is the worst person in the Multiverse. Worst person as in human being; I'm not talking about worlds-destroying space entities like The Anti-Monitor or whatnot. The Joker is simply the worst. He's irredeemable. He can't be rehabilitated, he can't be reasoned with, and as long as there is breath in his lungs and blood pumping in his heart, he will never stop killing and causing damage.

Would Batman be justified, in this one special case, in killing The Joker? Does the amount of good Batman accomplishes whenever he stops the latest rampage or massacre Joker causes balance out the harm Batman indirectly facilitates by letting Joker live? Personally, I don't think it does. I think The Joker is the one circumstance whom Batman has an obligation to sanction. This opens up the philosophical discussion of whether it's ever right to take a life. And we know Batman never will actually do it (not in the established continuity of DC Comics, you know, the one that "counts", outside of Elseworlds, other Earths, and even the Tim Burton Batman film.) But you also can't tell me deep down, whenever Batman engages The Joker he doesn't secretly wish somehow Joker will finally be killed somehow. Just not by Batman's hands directly.

And of course, the real reason Batman will never kill The Joker is because those characters have to continue in perpetuity. There's always more money to be made by another Batman/Joker story in every form of media. As Heath Ledger's Joker said in The Dark Knight, "I think you and I are destined to do this forever."

But me personally, I would not think less of Batman if he did us all a favor and sanctioned The Joker. I'd sleep better at night, in the Gotham City of my dreams.
Posted by Back of the Head at 2:25 PM