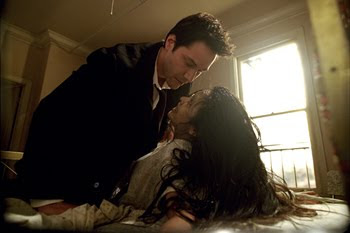 “What if I told you that God and the Devil made a wager, a kind of standing bet for the souls of all mankind?”


Why would He do something like that? That doesn’t sound like Him. Nevertheless, this is the core idea Constantine is based on, that God and Lucifer are on opposite sides with Earth as a neutral zone. Man is regularly influenced, pulled in different directions, but with no direct contact from either side. “The détente of the original Superpowers,” as the film refers to it.
In the middle of this supernatural game of checkers stands a lone, weary warrior, John Constantine. Constantine is a rude, chain-smoking, meddler in the occult, who has spent his entire adult life hunting down “halfbreeds,” demons from Hell who have gained more then their fair share of influence on Earth, and forcing them back to where they came from.
This is not the John Constantine I, nor anyone who has ever heard of him prior, am familiar with. That John Constantine, created by Alan Moore in the early 1980’s, was a blonde, brown trenchcoat-wearing, acid-tongued, chain-smoking Englishman bearing no small resemblance to Sting who starred in a Vertigo comic book titled Hellblazer.
Constantine's John has transformed into a raven-haired, black trenchcoat-wearing, laconic, chain-smoking American who looks, sounds and acts like Keanu Reeves. His stomping grounds, Great Britain and points beyond in the comics, are now a grimy, shadowy Los Angeles. And yet, immediately upon meeting him and watching him perform an exorcism that sets the wheels of the story in motion, Reeves creates a John Constantine as true to the comics in spirit as he is different in appearance. There is immediate verisimilitude. This is John Constantine, all right. He looks and sounds different, but God damn it, it’s him.
The movie’s story is loosely adapted from perhaps the most highly regarded of Hellblazer’s storylines, “Dangerous Habits,” in which Constantine must come to grips with being diagnosed with terminal lung cancer. However, Constantine grafts an original story involving God, Lucifer, their Sons, Heaven, Hell, demons, angels, the Spear of Destiny, and the end of the world. John Constantine navigates a frightening maze, searching for the clues to the suicide of Isabel Dodson, whose soul is damned to Hell.
Aiding him on his quest is Isabel’s twin Angela Dodson (both played by the fetching Rachel Weitz), a police detective running from her and her twin sister’s past and searching for the answer to her own future. They encounter a memorable cast of characters also late of Hellblazer: Papa Midnite (Djimon Hounsou), whose character somewhat resembles Humphrey Bogart in Casablanca, except black, fearsome and supernatural, the Archangel Gabriel (Tilda Swinton), and the demonic halfbreed Balthazar (Gavin Rossdale, yeah, the guy from Bush).
It’s nice to see Hounsou no longer playing a slave of some sort. He’s finally been given us free of typecasting. Swinton, not so much, as she continues being the go-to actor for creepy, androgynous characters. Rossdale was a pleasant surprise, putting in a slimy and sinister turn, and getting that pretty face of his messed up. Shia LeBeouf plays Constantine’s would-be apprentice. Constantine even refers to LeBeouf as his Robin (not as a compliment). The film forgets all about LeBeouf during the entire middle act, and when he reappears again, his story ends differently from what you’d expect.
Reeves is much better as John Constantine than feared. He understands the doomed but defiant nature of Constantine and does a spin on the character that both respects its source material while playing to his strengths as an actor. What strengths? Come on, give the guy a break. Unlike Neo, who struggled with his mission in The Matrix trilogy, Constantine has no such internal conflicts. He’s damned, he knows it, fuck the Devil anyway. There’s real chemistry between Reeves and Weitz but John Constantine is not the best man on Earth to get emotionally involved with, and he’d be the first person to tell you that.
Constantine is a horror picture crossed with a character study, much more akin to David Fincher’s Seven than a Wes Craven dead teenager movie. Even bounds by the restriction of a PG-13 rating, director Francis Lawrence had the balls to go for broke, taking Constantine and the audience on more than one jaunt through the flaming cityscapes of Hell, the golden gates of Heaven and points in between.
Lawrence’s visual style is bold and daring, yet he had a firm grasp of the characters and story. Constantine doesn’t play for laughs or irony either; this movie knows its subject matter is disturbing and isn’t shy about it. There are a few problems, notably the somewhat languid pace. Some of the CGI work on the monsters come off as less than convincing, although the location visuals were awe-inspiring, especially downtown Hell. Still, Constantine was a pleasant surprise in almost every way and is a superior effort from everyone involved.
What audience this movie is for isn’t entirely clear. It’s a dark, savage, supernatural thriller with horror elements and several nods to its comic book origins. Constantine is not a movie that will be readily embraced by the red states given the current cultural climate in America. But for those of us who don’t need to clutch the Bible to our chests in order to fall asleep at night, Constantine is a thrilling roller coaster ride right to the Devil’s doorstep, where we can all live vicariously through John Constantine as he walks up to Devil, sticks a middle finger right in his face, and gets away with it.
Posted by Back of the Head at 7:08 PM