I Hope They Remember You

"I'm with you til the end of the line," is the famous promise Captain America (Chris Evans) and Bucky Barnes (Sebastian Stan) made to each other for a century. Avengers: Infinity War is that end, the 19th film and the culmination of the last decade of the unprecedented success called the Marvel Cinematic Universe. A grand and shattering treatise on death, loss, sacrifice, and heroism on a truly universal scale never before witnessed in superhero movies, Infinity War brings the epic feeling of event comic book crossovers to movies. It's not for the newbie; it's for the True Believer. Infinity War demands a working foreknowledge of the characters, relationships, and plot points that have been woven through most of the prior films. It trades on the affection audiences have for these heroes (and villains). And in the end, it shockingly wipes the slate clean with a snap of Thanos' fingers.

A loose adaptation of arguably the greatest Marvel epic, The Infinity Gauntlet, Thanos (Josh Brolin) finally attempts to assemble the six Infinity Stones which represent the fundamental aspects of the universe: Power, Space, Reality, the Soul, Time, and the Mind. He's driven by his lifelong quest to balance the universe by eradicating half of it. In the comics, Thanos is a vainglorious lunatic in love with the personification of Death who is nonetheless charming and fascinating. Brolin's Thanos is a different, but satisfying take on the Mad Titan; driven, intelligent, mournful, but savage. Thanos has a heart, which is reserved for children he adopts and raises to be his lieutenants for his twisted cause. His favorite remains one of the Guardians of the Galaxy, Gamora (Zoe Saldana), to the chagrin of her long-suffering "sister" Nebula (Karen Gillan). Thanos and Gamora's relationship takes center stage, the latest and most tragic of Marvel's exploration of the harm fathers can cause their children.

Wholesale slaughter is Thanos' stock and trade, and absolutely everyone feels his wrath. The Avengers, broken apart and scattered on Earth and in space since their own Civil War, assemble in smaller groups to try to protect the two Infinity Stones still on Earth: the Time Stone is in the possession of Doctor Stephen Strange (Benedict Cumberbatch), who, along with Tony Stark/Iron Man (Robert Downey, Jr.), Spider-Man (Tom Holland), and the remaining Guardians of the Galaxy, try to take the fight to Thanos on his homeworld of Titan. Meanwhile, the Mind Stone ensconced in the forehead of Vision (Paul Bettany) is defended in Wakanda by Black Panther (Chadwick Boseman), Steve Rogers, Black Widow (Scarlett Johansson), Falcon (Anthony Mackie), Bucky, War Machine (Don Cheadle), Vision's lover Scarlet Witch (Elizabeth Olsen), and Bruce Banner (Mark Ruffalo). In one of the film's many interesting inversions of expectations, Banner can no longer Hulk out after his gamma-powered alter ego is humiliated by Thanos in battle when the evil aliens slaughter the people of Asgard, including poor Loki (Tom Hiddleston).

Not every character meets each other, and some long-simmering issues remain unresolved (the biggest being Steve Rogers and Tony Stark's falling out), but the meet-cutes between the Avengers and Guardians of the Galaxy that occur are beyond satisfying. No surprise, Marvel's two biggest egotists, the technological Tony Stark and the mystical Doctor Strange can't stand each other. Peter Parker is finally christened as an Avenger and fights alongside his mentor Tony, who watches out for him with a care and affection we've never quite seen Iron Man display before. The Guardians meet Thor (Chris Hemsworth), whose handsomeness impresses Drax (Dave Bautista) and irritates Star-Lord (Chris Pratt). Meanwhile, Thor takes a shine to Rocket (Bradley Cooper) and Groot (Vin Diesel). The God of Thunder has by far suffered the most loss and tragedy in his two most recent appearances, but Infinity War restores him to his maximum godhood, complete with a new weapon, the Stormbreaker ax.

The Avengers rise to the occasion in Infinity War. Despite their differences and the apocalyptic odds against them in the form of Thanos' powerful servants and their army of CGI monsters who invade New York City and Wakanda, we see the heroes at their very best (except Peter Quill). At a muscular, relentless, and overwhelming two-and-a-half hours, Infinity War is still unable, by design, to deliver everyone and every type of interaction one would hope to see. No one in the film gets the full picture of everything going on. Steve Rogers and his team's actions speak louder than words in defense of Wakanda, while Stark and his warriors are cut off from their fellow Avengers in space. Some of Thanos' minions have sufficient personality for the Avengers to banter with as they lay the smack down on each other, while Tony Stark's fame is revealed to be universal. Rather than kill the man at the center of the Marvel movie universe, Infinity War reaffirms Tony Stark as the center of that universe. It also, shockingly, does the same for the original core group of Avengers who started it all (well, almost all of them).

The final act goes for the gusto and cements Infinity War as Marvel's version of Lord of the Rings. The universe is changed, and the body count is "Holy shit!" staggering and truly shocking. The boldest choice by directors Joe and Anthony Russo is how the main character of the story succeeds in his ultimate goal, with no obvious path to how the surviving heroes can come back and save the universe. It's a true, genuinely unsettling cliffhanger. Everyone, in the film, and in the audience, loses someone they love in Infinity War, and the Marvel Cinematic Universe loses its innocence at last. There's no telling what exactly happens next or how. Just a slight tinge of hope at the very end that the universe can indeed be saved, by a woman who bears Marvel's namesake.
Posted by Back of the Head at 8:58 AM 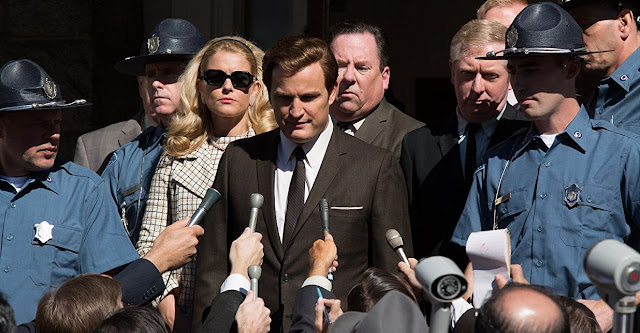 Chappaquiddick is a sturdy lesson in crisis management, Kennedy-style. On July 18, 1969 - a couple of days before Neil Armstrong walked on the moon - the DUI Senator Edward M. "Ted" Kennedy (Jason Clarke) drove his car off the Dike Bridge into the water below. Kennedy somehow escaped but his passenger, Mary Jo Kopechne (Kate Mara) wasn't as lucky. As Kennedy emerged safely, Mary Jo drowned in his vehicle. Fearing public disgrace, the end of his prospective Presidential run and the ruination of his political career, Kennedy waited 9 hours to report the incident. Instead, he recruited Joe Gargan (Ed Helms), his cousin, attorney, and family fixer, and Paul F. Markham (Jim Gaffigan), the U.S. Attorney for Massachusetts, to help him explain away the crime. And he would have gotten away with it too if it weren't for the meddling press, investigators, and everyone else peering into this careless and sloppy attempt at a cover-up.

As Kennedy wrestles with his conscience, his poor character, and the expectations of his disappointed, ailing father Joseph P. Kennedy (Bruce Dern) - whose strategies for a cover-up Kennedy ignores - Chappaquiddick doesn't really build up steam until the lawyers come into the picture. Led by Robert McNamara (Clancy Brown), essentially Mr. Burns' ten high-priced lawyers all take turns yelling at Kennedy for his hare-brained ideas to keep his name clean. Kennedy's dumbest, by far, was feigning a concussion the night of the accident and wearing a neckbrace to Mary Jo's funeral. Like the swarthy guy who wore a neckbrace to Carol Brady's trial and Mike Brady subsequently exposed in a Brady Bunch episode, Kennedy forgot a guy in a neckbrace shouldn't be able to crane his neck around. In the end, Kennedy never did become President, but his public statement and apology to the voters of Massachusetts ended up saving his political career.

Clarke is terrific as Ted Kennedy, and Chappaquiddick does a fine job evoking the Kennedy mythology, asking the audience to weigh whatever positive mystique the family retains to this day against the ugly reality of the deeply flawed, entitled men who carry that surname. The Kennedy magic largely died with Jack and Bobby, but Chappaquiddick showed enough of the mystique remained that the local law enforcement and even the voters still bent over backward to explain away the grave mistakes of the surviving Kennedy brother.
Posted by Back of the Head at 5:02 PM 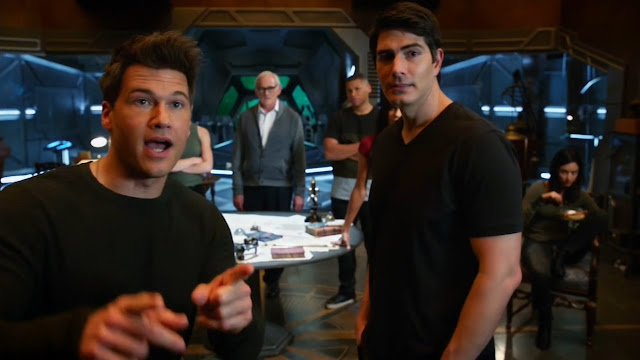 Midway in season 2 of DC's Legends of Tomorrow, during the Legion of Doom story arc, the needle began to move. Legends was always considered the fourth and least of the Arrowverse shows behind Supergirl, The Flash, and Arrow, but a shift had begun. Now that Legends' fabulous, raucous, and utterly bizarre season 3 is over, it has surpassed its sister series and has taken the top slot as the most entertaining - and dare I say best - Arrowverse series on The CW.

I've gotten to write some fun features in recognition of Legends season 3 for Screen Rant. Check them out collected below:

LEGENDS OF TOMORROW IS NOW THE BEST ARROWVERSE SHOW 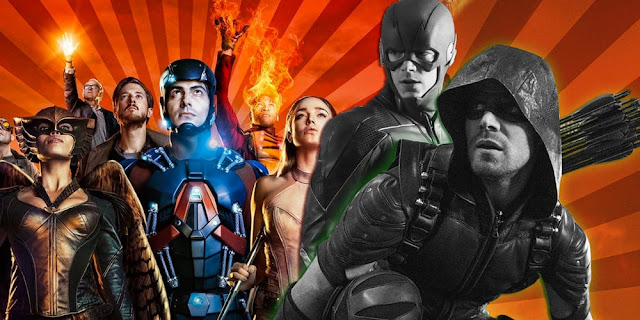 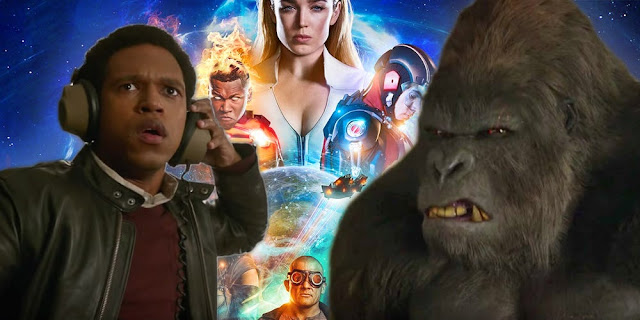 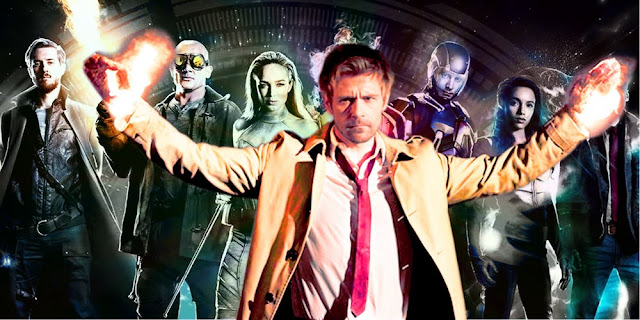