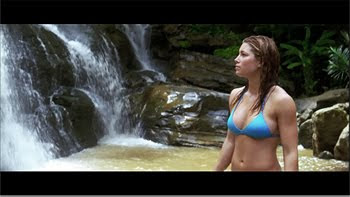 July 20, 2005
Last night, I checked out a free screening of Stealth, the new action movie that’s Top Gun meets Top Gun meets a mental patient who stays up all night watching Cinemax but doesn't understand the complicated plots.
Stealth opens up with a long series of place cards which helpfully inform the audience that “to combat terrorism” the U.S. Navy created three super duper advanced stealth fighters. Holy shit, no wonder we haven’t won the war on terror yet! We haven’t done what Stealth suggests is the solution to the complicated matter of international terrorism: send stealth fighters to shoot missiles at terrorists and blow them the fuck up. G.I. Joe had a more realistic approach to fighting terrorists and they had ninjas, pirates and dogs on their payroll. These stealth fighters are not only super fast and stocked with lots of missiles but they come equipped with female computer guidance voices, like the woman’s voice on the Star Trek computers except proficient in phone sex.

The opening crawl goes on to say that over 4,000 pilots were tested to fly the new stealth fighters and only three were chosen. Why only 3? Why didn’t they build 4,000 stealth fighters? Isn’t 4,000 better than 3? Think of how many missiles you can fire at terrorists if you had 4,000 stealth fighters.
To further illustrate how unimaginative Stealth is, the three chosen pilots are given the following call signs: One, Two, and Three. Jesus, can’t they even try to come up with something more creative? I’ll do it for them them. The pilots chosen to fly the most advanced stealth fighters in the world are Josh Lucas (call sign: Sweet Home Alabama), Jessica Biel (call sign: 7th Heaven), and Jamie Foxx (call sign: Ray Charles.) They live their lives 1,000 miles at a time.

Lucas has the hots for Biel and shows it by banging floozies not half as hot as Biel and telling her about it instead of just asking Biel out. Foxx is in the movie, but not really. In every scene Foxx is in he’s practically rehearsing for Ray and Collateral instead of paying attention to how he’s supposed to act in Stealth. There are moments he’s sitting in his stealth fighter and he’s wondering why his taxi has wings and why Tom Cruise with a blond wig isn’t sitting in the back seat. Then he starts playing piano on the dashboard.
One day, a bomb of a different sort is dropped: The three stealth fighters have a new wingman.
Jessica Biel: A fourth wingman?
Let’s see, there’s one, two, three of you already – that’s right, Jessie, four comes right after three. The fourth wingman is an artificially intelligent robot stealth fighter called E.D.I. (call sign: Skynet.) It’s a learning computer and the three heroes are supposed to fly with it on missions, at which point it will learn everything they know and then at a later point replace them. Lucas is not keen on the idea.
Josh Lucas: War isn’t supposed to be some kind of video game!
Neither are movies, but shit, look what I’m watching you act in. They do as ordered and take the robot on a mission where terrorists are hanging out in an office building in the middle of Rangoon. How do they have this intel? Because from their stealth fighters in the sky thousands of miles away, they can perform retinal scans and finger print analyses of the terrorists in question and confirm their identities as enemies of the freedom-loving peoples of the West. Now, how the fuck can they confirm the IDs of a bunch of terrorists by finger prints and retinal scans? How did they have their finger prints and retinal data already on file? When did the terrorists submit to having that data filed by American computers? Whatever, idiots.

Stealth then eases off stealing from Top Gun and starts riffing on Behind Enemy Lines. Biel is shot at by the North Korean Army as she desperately tries to cross the forests and mountains into the DMZ and friendly South Korea. Unfortunately, opportunities were missed left and right here as Biel manages to evade her pursuers. What should have happened is Biel gets captured, locked in a gulag, stripped down, tortured, gets her head shoved in a bucket of water, and gets poisoned by scorpions, all while shitty Madonna music plays.
James Bond: Been there, done that, not pleasant.
And then Biel should have been brought before Kim Jong Il.
Kim Jong Il: I’m so ronery…
Unfortunately, except for her getting clipped in the arm with a sniper bullet, Stealth pussies out when it could have gone for the gusto, mostly keeping Biel out of harm’s way. Biel is good in these scenes, though. As in The Texas Chainsaw Massacre, the athletic Biel can convincingly be chased by people out to kill her and make you care for her peril. Neither a damsel in distress nor a tiny waif, Biel can run, evade and fight more believably than most other actresses her age.
Meanwhile, in the skies above the world, Lucas is still chasing the crazy robot plane. They dog fight each other, take time out to refuel in mid-air, dog fight some more, end up in Russian air space, team up against Russian planes, and then start fighting each other again. By this point, I’m pretty bored. This movie just keeps going and going. I think it’s about two hours but it feels like seven. Instead of destroying the robot, Lucas comes up with an idea so brilliant it can’t possibly work and makes no sense. He launches his last missile into the sea as the robot chases him and creates a giant water explosion. The robot plane, which had holes shot into its hull by the Russians, flies through the water and miraculously, its fried circuits are rewired or whatever and it turns babyface. Holy shit, all the evil robot needed was a bath and it turns good again.
Mr. Burns: I’ve had one of my unpredictable changes of heart.
Lucas and the robot plane are pals once more, but the movie keeps going on and on as the evil commander Shepard, realizing he’s gonna be court marshaled for all the shit he’s done, such as sending three pilots on a hot, sexy Thailand vacation with taxpayer money – and also that nuclear cloud over Pakistan the evil robot plane he built caused – arranges to have Lucas killed and the robot’s memory wiped in a super secret base in Alaska only the evil commander knows about, stocked with a bunch of bumbling idiots.

Lucas finally figures out that he’s been sold out. He steals the robot plane and uses all the songs from the Stealth soundtrack the robot plane illegally downloaded to distract the enemy soldiers while he launches missiles and blows up the secret base, killing them all. Wait, the robot plane has exterior speakers? Why the fuck would exterior speakers be built in a robot stealth fighter?
Lucas steals the robot plane to go on one last mission: fly into North Korea and save Jessica Biel. Meanwhile, Biel does the only stealthy thing in the entire movie by making it undetected to the North Korean border but she is located before she can hop the fence into the DMZ. Just when she’s about to go on a one-way trip to (7th) Heaven, Lucas and the robot show up, kill every North Korean in sight and blow a lot of shit up with missiles. Lucas leaves the plane and runs with Biel to the DMZ and to safety. Just then, a helicopter gunship with more North Koreans arrive to kill Lucas and Biel. The robot plane takes off and makes a curious decision not to fire missiles. Instead, it inexplicably makes the ultimate sacrifice to save its human friends; colliding with the gunship, killing itself along with the North Koreans so that Biel and Lucas can make it to the warm, glowing, warming glow of the Demilitarized Zone.
Captain Kirk: Of all the robot planes I’ve ever known, he was the most …human!
Finally the fucking movie is over. I didn’t even get to mention what happens to the evil commander (it’s sort of implied he commits suicide but the movie completely forgets about him). There was all this other crap going on with the billionaire software developer in Seattle who built the robot plane, the senator who for no reason whatsoever is only shot with cameras that are outside his office window, and Joe Morton (call sign: Miles Bennett Dyson) as the captain of the aircraft carrier who went to arrest the evil commander.
And for a movie called Stealth, they didn't do anything stealthy. What's so fucking stealthy about flying into a country at supersonic speeds and then shooting missiles at everything?
Despite the fact that they killed a lot of innocent people in Pakistan and Lucas illegally flew into North Korea, killed a lot of soldiers and basically started a war, no mention is made of the consequences of any of it. Instead, Biel and Lucas are instantly back on the aircraft carrier, all cleaned up for Jamie Foxx’s funeral at sea. No mention is made of what happens to them because of all the shit they did and all the people they killed. And even after flying to North Korea to rescue Biel, Lucas still doesn’t even kiss her. Biel ends the movie by calling him a pussy. Quite right.
Posted by Back of the Head at 8:47 PM