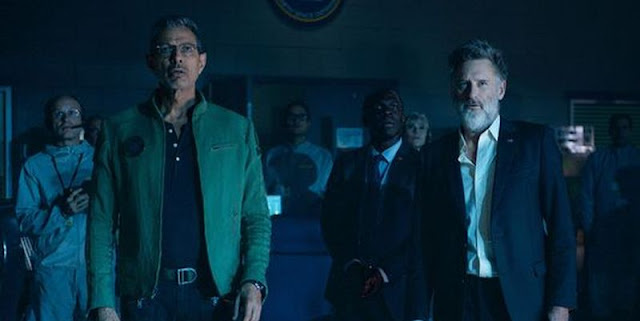 How can the same thing happen to the same planet twice? Independence Day: Resurgence sees our bright blue orb invaded once again by aliens twenty years later -- to the day! A lot has changed on Earth in the two decades since those aliens blasted all of our landmarks, humanity fought back and we celebrated our Independence Day. The salvaged alien technology from the many ships crashed on Earth has been rejiggered into impressive new weapons and vehicles. Our cities and landmarks have been rebuilt. We have a lunar base. A generation has grown up admiring the heroes of 1996, like Jeff Goldblum, former President Bill Pullman, and the late Will Smith, gone but not forgotten. Their children, Jessie T. Usher as Will Smith's son and Maika Monroe as Pullman's daughter, now grown, are the new top gun fighter pilots ready to defend the Earth, along with Liam Hemsworth, Rain Lao, and Nicholas Wright. Mankind has become a united species, the kind of Utopia Star Trek creator Gene Roddenberry would have loved to see. Humanity has banded together, ready to meet the threat of a second alien invasion. And the aliens are definitely coming; apparently they (like we) have spent the last two decades hearing and memorizing Pullman's rousing speech from the first Independence Day.

So the aliens are back, and they're not wasting any time. In the original Independence Day, dozens of alien ships ominously took position over Earth's cities and systematically annihilated each one over the course of a three day holiday weekend (2 1/2 hours in movie time). Now, the aliens only send one ship, a titanic craft 3000 miles in diameter that squats over the Atlantic Ocean, wiping out the UK and the East Coast of the United States (amusingly only nudging the rebuilt White House). As far as mass destruction of our cities go, only London really gets demolished; the aliens gave the Brits no time to #Brexit before their annihilation. Compared to the original movie, the destruction porn in Resurgence is quick and subdued. The aliens are way more interested in settling a score with specific humans, launching a direct attack on the new President Sela Ward, and then coming after Goldblum and Pullman in their base in Area 51. The aliens must have been bummed (like we are) Will Smith isn't around; they probably wanted to settle his hash the most.

"We knew they'd come back," Goldblum warns when things start to get weird again. The aliens captured and imprisoned in Area 51 for the last 20 years start to go batty and then break out. (Incidentally, why did the humans imprison the aliens without removing them from their tentacled battle suits?) Pullman, bearded, hobbled, and haunted by visions of the aliens (and possibly visions of the movie Aliens) rants about the aliens having a Queen. He's right, they do. And she's pissed. Scientist-weirdo Dr. Okun (Brent Spiner, unapologetically in zany comic relief mode), thought dead in the first Independence Day, was actually in a coma all this time, and suddenly reawakens. In Africa, the lone alien ship from the first invasion that is largely intact comes back online. Goldblum realizes it's drilling into the Earth's core to destroy the planet from within. When a worm hole opens up above the moon, our swaggering leaders order the emerging alien craft shot down, but Goldblum quickly surmises this new white spherical space ship is a different alien species and leads the attempt to rescue it. Turns out Goldblum is right, as ever. The white alien sphere represents other species the evil aliens, now called Harvesters (Mankind never named the aliens themselves in the last 20 years), have hunted. All the other aliens also heard about the first Independence Day and want the human race to lead their alliance to fight the aliens -- in space!

But first, there's the matter of repelling this new invasion. Once again, it involves a battle in the air and on land in the salt flats outside Area 51, and once again, Bill Pullman pilots a fighter plane and leads the charge against his now-arch rival the alien Queen. This time, however, the Queen, clad in a 50 foot tall battle suit, fights back like a Kaiju monster; Independence Day: Resurgence riffing hard on Pacific Rim. Luckily, a sword-wielding African warlord Goldblum befriended, one of the many new weirdo characters Resurgence introduces, teaches humanity how to beat the aliens in their battle suits -- by stabbing them in the back. Fitting. Hemsworth, Usher (who's really more like his mother Vivica A. Fox than his dad in the charisma department), and Monroe, fight the aliens heroically, but this new generation is of a blander sort than their parents. Speaking of parents, Goldblum's father Judd Hirsch drives a school bus full of orphans right into the Area 51 battle, because of course he does. While promising a starry-eyed continuation of this franchise, Independence Day: Resurgence echoes the greatest hits of the original, but it's a rushed, tepid remix reminding us that though we always knew the aliens would be back someday, we also rather they just stayed away.
Posted by Back of the Head at 9:38 AM 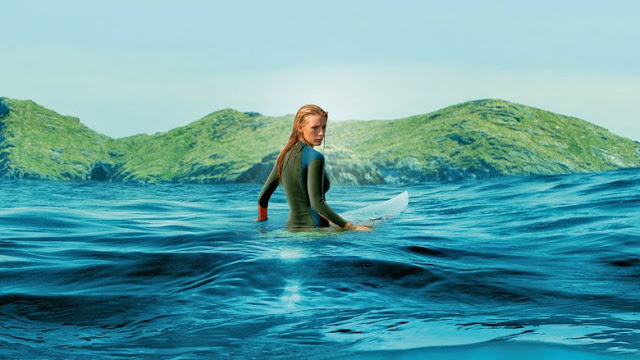 The Shallows, director Jaume Collet-Serra's sun-kissed, bloody good Blue Crush-meets-Jaws mashup thriller, is Blake Lively's The Revenant. In The Shallows, Lively plays a medical student mourning the death of her mother by escaping to surf the unnamed Mexican beach her mother once surfed. Though her journey to this spectacular paradise (the name of the beach is assiduously guarded by the locals), mildly echos a different Leonardo DiCaprio movie, The Beach, soon Lively is pitted body and soul against the ocean's most ferocious killing machine. There's a Great White shark in them there waters, and it's hell bent on taking Blake's livelihood in a manner even the bear DiCaprio fought in The Revenant wasn't. This damn shark wants Blake Lively to be his chum, and not in a friendly way.

Like DiCaprio in The Revenant, Lively endures a physical and emotional hell in her efforts to survive. When the shark attacks Lively and soon makes shark meat out of the two other surfers she befriended, Lively's only recourse is to take refuge on a jagged, shallow reef 200 yards from shore. Time is against her. High tide will once again submerge her meager shelter. She's exposed to the elements. And she's grievously injured; beyond multiple cuts and abrasions, the shark chomped on her leg. Gangrene threatens to set in. Pleasingly, Lively is no damsel in distress. Through up against impossible odds, Lively gathers her wits and thinks her way out of her dilemma. She uses her medical training and her earrings to rather gruesomely suture her wounds. She uses her Body Glove to create a tourniquet. She even sets the broken wing of her lone companion, a scene-stealing seagull she names Steven Seagull. (Lively uses Steven Seagull as a decoy kind of like how Batman uses Robin.) As Lively's options narrow, the shark remains relentlessly on patrol, drawn to the steady streams of Lively's blood in the water.

When the shark enters a realm of sheer malevolence that goes beyond what one would believe even a hungry Great White would actually do, The Shallows, which had remained mostly compellingly straightforward, teeters on the brink of jumping the shark in the third act. As high tide takes her reef under, Lively's last desperate gambit is to swim to a nearby buoy. The shark's dogged pursuit has it literally tearing through the metal of the buoy in order to sink its teeth in Lively. And yet, Lively's last ditch maneuver to kill the shark, while sheer lunacy, is surprisingly rousing. On screen for nearly every second of the entire movie, Lively gives a heroic - nay, superheroic - performance. As physically perfect as she is when The Shallows begins, Lively, broken, bleeding, exhausted, and nearly drowned, achieves an awesome level of total bad assery in her climactic showdown with the shark. Even if one in jest were to command,"Physician, CPR thyself," to the shark's chagrin, Blake Lively does. The shark bet on Blake losing the dead pool, but it was sorely mistaken.
Posted by Back of the Head at 2:05 PM