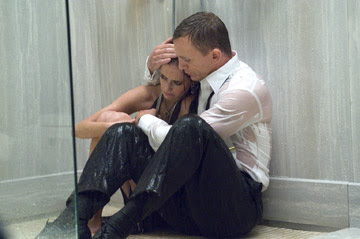 Casino Royale is a weird, uneven curiosity. To borrow one of the sad double entendres from the last Pierce Brosnan Bond movie, Royale has no narrative thrust to speak of. Practically three movies in one, it opens with no less than three escalatingly violent and insane action sequences then grinds to a near-complete halt for an hour where all the action revolves around Bond playing poker. Then Royale becomes the sappiest love story this side of Love Story before one more violent action sequence, followed by an overlong coda.

Casino Royale is also very entertaining and has several tremendous moments. It gives us a jacked Bond who looks older and tougher but behaves younger and more carelessly. It claims it's a stripped down, more realistic Bond, but Bond is the one constantly getting stripped. The movie presents us with wild action such as a building collapsing in Venice and a chase scene at an airport so over the top Bruce Willis in Die Hard 2 would have smirked at the absurdity. And plot holes? We got plot holes royale. And yet there's a lot to like here, starting with the leads.

Daniel Craig gets better as James Bond as the movie goes along. He's more callous, more reckless, less refined, a work in progress creating as many problems as he brutally solves. Craig's Bond and Christian Bale's Batman should meet for tea in the Batcave, compare bruises and scars, and trade stories of all their fuck ups. While he is the most convincingly physical of all Bonds, I enjoyed Craig far less in the ultraviolent first act of the picture than when he meets Eva Green on the train to Montenegro.

Eva Green is a star-making revelation here and Royale's finest achivement (for a while). Finally, a three dimensional woman in a Bond picture who is not only beautiful but intelligent and has depth and complexity. I think I fell in love with her about the exact same time Bond did. Green and Craig have palpable chemistry and together have the best moments in the picture.

I would gladly trade all the action sequences in Royale for more scenes like their first meeting on the train as Bond and Vesper size each other up and see right through each other while trading witty barbs, zealously and futilely trying to hide their inner selves behind transparent armor. Rather than trade sleazy double entendres, the most cringe-inducing sin of Brosnan's Bonds, Craig and Green actually talk to each other, their eyes and body language saying much more than their guarded, imprecise words. There isn't a more tender, more human (finger-lickin' good) moment in the Bond franchise than Bond sitting with a traumatized Vesper in the shower and holding her. For once, Bond isn't thinking about fucking the girl, but he's empathizing with her, feeling something foreign to him: love. Love of someone other than himself.

Bond and Vesper are magic until the third act when Vesper suddenly devolves from a spirited, confident equal to Bond to a standard issue love interest. Craig and Green eschew their prickly reparte and devolve into lovey-dovey fuck buddies, rendering both the characters and the movie limp until a telegraphed revelation that nastily robs us and the movie of the best thing about it.

What else did I like? I liked the black and white cold open showing how Bond earned his 007 status. I liked Chris Cornell's song, "You Know My Name," a rocking relief from the aural atrocity Madonna commited in the previous Bond movie. In Madagascar, the acrobatics (parkour) performed by the man Bond chased to the embassy he ultimately blew up were fucking amazing. I liked Bond's petty vindictiveness towards the asshole who thought he was a valet by smashing his Range Rover. I liked Bond gradually inventing his trademarks such as his drink of choice, the vodka martini, shaken, not stirred, and how everyone at the poker table ordered one too. I liked the big fat black guy at the poker table. Bond wears some really nice suits. Most of all, I liked Bond when he made mistakes, when he was arrogant, when he was reckless, when he was learning. I liked how Vesper Lynd saved his life no less than twice.

Craig's Bond is more vulnerable than any other Bond ever. He gets hurt and gets so much blood on him when he fights it's almost comical. Speaking of comical, Casino Royale teaches us that an hour is enough time in between poker games for one to get into a bloody fight, kill your enemies, and then shower and change into a fresh tuxedo. And Eric Cartman would appreciate the scene where Le Chiffre is breaking Bond's balls, man, he's breaking his balls.

Problems and questions royale: The biggest one is why Vesper didn't just tell Bond that she made a deal for his life? Much of their conversations revolved around his abilities, the things he can do. Why not trust him to help her? One answer is that she'd already seen him nearly die twice and have his balls pounded into powder and didn't want to put him in harm's way. But still, she was guaranteeing they'd have no life together and his whole idea of retirement would never stick if she weren't in his life. And it doesn't.

Who is Bond's enemy in the movie? Le Chiffre is a disappointment as a Bond villain, especially compared to how Brosnan's debut gave us Sean Bean as Alec Trevelyan, 006, a hall of fame Bond villain. Le Chiffre is just a quiet, weird looking guy who cries blood and likes poker. He's sadistic and dangerous but at the end of the day, he's not very interesting. He just wants money because he's in debt to other, more sadistic and dangerous people. Bond ends up against a phantom menace ("the terrorists") represented by a series of thin-lipped European men.

The airport sequence is chock-full of plot holes, such as the terrorists evil plan apparently revolving around blowing up a gigantic new airliner before it leaves the ground. Haha! You have one less airplane! Take that, decadent America!

Finally, the movie is badly structured. It's front loaded with escalatingly crazy action before we have time to properly invest in Craig as Bond. Then the movie essentially hits the reset button for the middle hour of Bond trying to beat Le Chiffre at poker. Eva Green walks into that train and for all intents and purposes it's a new movie. The third act limps to its end. Bond and Vesper make like rabbits and we stumble along towards an unsatisfying conclusion where we lose the second best character in the picture while M gives Bond motherly advice and explains what it all means.

What is up with M this time around? Is she the head of British central intelligence or the den mother of a boy's preparatory school? Do all Double-0 agents get coddled like Bond does? Harry Potter's wizard teachers don't hold his hand and whisper "there, there" to him as much as M does Craig's Bond.

Casino Royale doesn't add up to the sum of its parts. Its strengths lie in the fine performances by Craig and Green. Brosnan's Goldeneye was generally more successful as an introduction to a new Bond without the radical alterations, but Royale is better and more memorable than Brosan's last three Bond movies.

As soon as I got home, I popped in the DVD of Brosnan's final Bond, Die Another Day, for some perspective. It was the movie I remembered from four years ago: a preposterous cartoon about conflict diamonds, a Korean genetically turned into a pasty-white Englishman, a laser in orbit, an invisible car, an ice castle, Halle Berry foreshadowing her shitty turn as Catwoman, and Bond unable to identify which MI6 agent betrayed him when there's only one other MI6 agent who happens to know all the same villains he does in the movie. This was a series that needed a drastic change.

Compared to Die Another Day's straightforward silliness, Casino Royale, when it's working, is a far better film. But we can already see the seeds planted where Craig's Bond will bring us right back to where Brosnan left us. At least Craig's Bond gives us the impression it won't be a smooth shake and stir.
Posted by Back of the Head at 12:17 PM