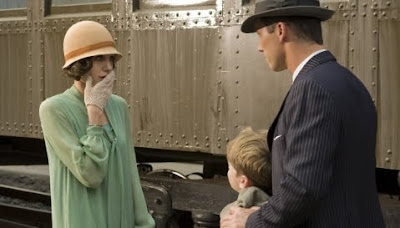 Curious title, "Changeling," for a movie where not a single character grows or changes throughout the course of the 2 1/2 hour story. Everyone is exactly the character they were at the end as from the start. The trailer says Angelina Jolie's son was abducted, the LAPD "found" him, but she says "It's not my son!" (300 times). Then they throw her in the loony bin for making their shitty policing look bad. That's what happens, all right. But there's an extra hour more to the story, most of it pretty unnecessary. The loony bin stuff was Girl, Interrupted circa 1930, only with Amy Ryan in a walk-on instead of, well... Angelina Jolie. Angie looks frail and sickly; it makes me long for the days when she was 25, fit, athletic and Lara Croft. I sure miss 25 year old Angie. The sweetest parts of Changeling were all the scenes they shot at the Universal backlot in the same streets we shot Across the Hall. The final shot of the movie was a long, loving look at the street we shot on, complete with the exterior of our Riverview Hotel. Ah, the memories.
Posted by Back of the Head at 10:53 AM 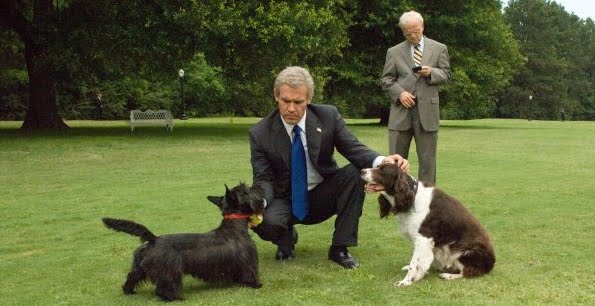 W. is no JFK, no Oliver Stone masterpiece. Not even close. Stone didn't learn his lesson from Alexander about time-jumping structures hurting his biopics. Josh Brolin's performance and impersonation of George W. Bush is Oscar worthy. Brolin is damned amazing as W. and he's surrounded by an all-star cast, caked in various degrees of makeup, portraying Dick Cheney, Donald "Rummy" Rumsfeld, Condoleezza Rice, etc. as a grotesque Saturday Night Live-esque menagerie of lunatics and suck ups. No sympathy is offered for Cheney, Karl Rove and Rummy; none asked. Thandie Newton in her Condeleeza Rice makeup resembles a gargoyle. The most sympathetic portrayals are saved for Jeffrey Wright as Colin Powell, Elizabeth Banks as Laura Bush, and James Cromwell as George H.W. Bush, who is presented heroically as W's opposite and emotional enemy. Though peppered with entertaining moments, overall, W. is a weird, purposely-manipulative collection of events that may have been or never were. Stone mixes in famous W quotes like "misunderestimated" and "fool me once, shame on you. Fool me twice... I won't be fooled again!" - all dreamed up by Stone and his writer to explain away who the sitting President is. But to what end? Brolin's W never comes off as sympathetic or likeable. Perhaps he's never meant to. I know that by January 2009, I'll be glad to be rid of the real life W.
Posted by Back of the Head at 10:58 PM

Entertaining Middle Eastern spy thriller with strong performances from Sir Ridley Scott's cinematic life partner Russell Crowe and Martin Scorsese's cinematic life partner Leonardo DiCaprio on loan to Sir Ridley, but the attempted verisimilitude gradually chips away and shatters completely by the third act. The budding relationship between DiCaprio and his Iranian nurse was probably the most interesting aspect of the picture for how well the cultural difficulties are played. Some effectively bloody and jarring violence wakes the audience up from the murky politics and talky-talky. Mark Strong all but stole the picture as DiCaprio's handler in Jordan, my dear. Ultimately, it felt a lot like Blood Diamond mixed with Syriana, although I'd say it's a bit better than both. Still, I probably won't ever watch, much less think about Body of Lies again.
Posted by Back of the Head at 10:52 AM 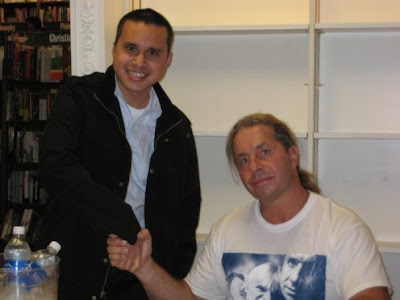 October 10, 2008
Hitman
Bret "Hitman" Hart's book tour rolled into Boston yesterday and I lined right up with a couple of hundred people to meet one of my wrestling heroes.
My impressions of Bret in the brief minute I spoke to him while he signed my copy of "Hitman: My Life in the Cartoon World of Wrestling" were that he was certainly older now.  Everything that has happened to Bret in the last ten years, losing his brother Owen, his parents, his brother in law Davey Boy Smith, his marriage, his stroke, has taken its toll.  His long stringy hair is now greying brown, no longer the slick greasy black of his heyday. There are more lines on his face than before, and that face is tinged with sadness and loss.  The T-shirt he wore of himself and Owen in happier days of the early 90's was a bittersweet reminder of that.
And yet, he's still Bret Hart. Bret seemed reserved and taciturn, but still carries himself with a bit of that trademark arrogance that helped define "the Hitman".  A little intimidating at first glace, it turned out Bret was gracious, good humored, and occasionally showed that world-famous smirk of his.
I was thrilled to meet him.  While in line with my friend Lance Jr., I cracked numerous jokes to temper the building excitement, but I was honestly nervous to meet Bret. When I was about 17, around the time Bret was WWF Champion for the first time, he was my hero.  Bret still holds my highest regards for his career and accomplishments.
I hoped I'd be funny and cool, maybe say something clever to Bret when I finally got to the table and shook his hand but no, I just about totally marked out.  Just blathered about what a big fan I was and how I thought his book is fantastic.  It was maybe a minute of interaction but it felt like it was a microsecond.
About Bret's book:  This is the real deal.  Only 184 pages in, I can already honestly say "Hitman" is as good as Mick Foley's "Have A Nice Day"; perhaps in some ways even better.  This is lofty praise.  Bret's book and Foley's first book are the highest level of pro-wrestler autobiographies.  Chris Jericho's "A Lion's Tale" and I think to a lesser extent Edge's "Adam Copeland on Edge" are in the second tier but below what Foley and Bret have written. Every other wrestling biography is crap, crap, crap of varying shades.
A fan of pro wrestling, especially someone who craves an insightful, blunt, and intelligent account of the Calgary Stampede Wrestling era of the 1970's, and the World Wrestling Federation of the 1980's and 1990's, along with stories about working in Japan and the territories in the early 80's and WCW leading to its collapse, would gladly devour Bret's book.  Bret pulls no punches; he is brutally honest, funny, touching, sad, and impressive.  I'm glad to say Bret's autobiography is the equivalent of his wrestling talent.  It's the excellence of execution. 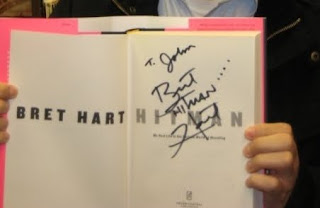 Email ThisBlogThis!Share to TwitterShare to FacebookShare to Pinterest
Labels: OUR so-called SPORT, WWE 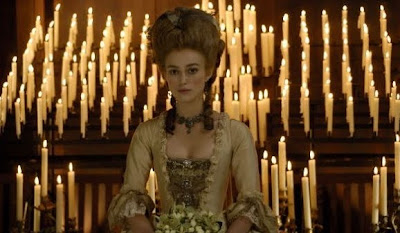 Indulging my Keira Knightley in a corset fetish this time finds a rather fine -- if long, two hours felt like three -- British tragedy of manners. Occasionally felt like Masterpiece Theatre crossed with an episode of Married... With Children. Gorgeous English scenery; the city of Bath in particular. Made me want to book a flight to the UK straightaway. The story spans fifteen or so odd years but no one ages. Ralph Fiennes added another character to his arsenal of thin-lipped, rod-up-his-ass, sneering villains-who-don't-wish-to-be-but-that-doesn't-stop-him. Fiennes was good enough to state the theme of the movie at the end, in case anyone's mind had wandered off: "How wonderful to be so free." Fiennes did have a couple of awesome dogs. There weren't enough of those dogs in the movie. I'd cast Fiennes' dogs with the dog Will Smith had in I Am Legend and make a movie. Two hours of me playing fetch with them.
Posted by Back of the Head at 11:01 PM

How to Lose Friends and Alienate People (*1/2)

HOW TO LOSE FRIENDS AND ALIENATE PEOPLE 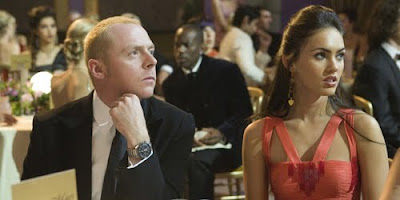 A WTF trainwreck featuring one stunning Megan-Fox-in-her-underwear scene. Skip the movie, wait for the clips on the Internet.
Posted by Back of the Head at 6:51 PM 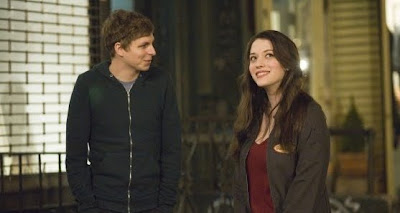 A miss by a fairly wide margin, which is unfortunate because the good things about it were really quite good. It was nice to have a perspective where the female lead (Kat Dennings, very appealing in a very non-CW way) really liked the male lead and pursued him. Usually it's the other way around in these movies. I really hate the hackneyed "One CRAAAZY night where CRAAAZY things happen" formula. It did no service to the characters of Nick and Norah, who were trying to have a pretty sweet little romance, except the stupid plot kept interrupting them and trying to keep them apart according to Screenwriting 101. The last 15 minutes turned out to be really good; it's a damn shame we had to wait so long and slog through so much muck for that payoff. Why couldn't the last 15 minutes be the first 15 minutes and then gone on from there and see where the characters take us?
Posted by Back of the Head at 7:06 PM