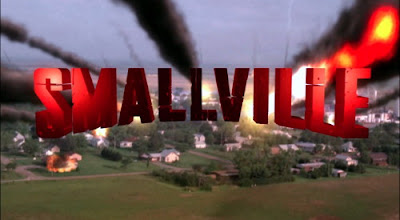 Smallville is a far better superhero TV series than Heroes. Smallville is a way more fun show to watch. They don't posture like they're more profound or original than they are. As far as I'm concerned, they have hotter chicks. More importantly, Smallville's characters have the advantage of being the established DC Comics heroes beloved by generations: Superman and his Superfriends.

For a second, just a second, I thought they were gonna kill Chloe. And for that second I was a little relieved because then I would have been done with Smallville for good. But no, she wakes up naked in a morgue. And I'm also glad because now's not the time to leave Smallville.

After hating this show for five seasons I rather enjoyed it in its sixth by embracing both its dumbness and its improvement with the addition of Green Arrow, Martian Manhunter, and the Justice League.

The best part of Smallville today is that they seem fully committed to turning the show into Action Comics. Smallville is much more now than the hoary "teen Superman growing up" concept they've beaten to death. Little by little over the years, and full-on in season 6, Smallville has become the DC Universe on television.

The roll call of the opening credits' main cast of characters this season is comic geek heaven:

This show is now four very hot chicks surrounded by superheroes and supervillains. The Kents are gone, everyone is 21 or older, the pretenses that they are kids in school and must go to classes, etc. look ripe for permanent abandonment. If Clark somehow finally does the 180, stops being a selfish dumbass and begins acting like SUPERMAN, that will be the final piece of the puzzle missing. As Smallville turns into Action Comics: The Television Series, it's finally really finding itself. As series reinventions go, this is pretty fun. Still dumb, sure, but mostly fun.

Clark really needs to get on with learning how to fly. It's time he wore the tights and cape. It's time he really, finally becomes Superman. And stops being such a douche.
Posted by Back of the Head at 10:37 AM 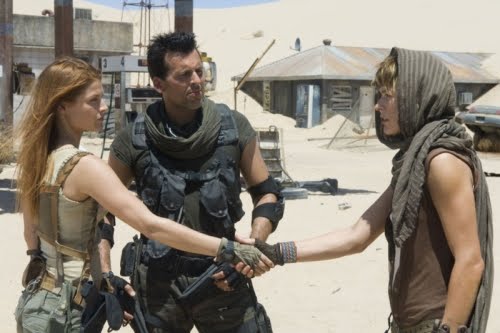 September 25, 2007
Resident Evil: Extinction was a watchable bad movie. It was better than the second one so it has that in its favor. The first thing that annoyed me was that all of the trailers, TV spots and print ads sell this movie based on the Las Vegas setting but the Vegas sequence is only about ten minutes, fifteen tops.

There were all kinds of dumb logic gaps and plot holes that are typical of a Paul WS Anderson-written movie:

* The beginning where Milla Jovovich runs into the hillbilly family. It had nothing to do with the main story. We figured they were cannibals but instead they just capture people and feed them to zombie dogs. Why does the hillbilly family go through all the trouble of luring people to their town just to feed them to zombie dogs? Why do they even keep a kennel of zombie dogs? How do they get the zombie dogs back in their cages? It's not like zombie dogs take instruction or are trainable. It was a pretty stupid and unnecessary sequence. It doesn't establish Milla is a bad ass; we have two prior movies that told us that. And it didn't set up her new power of telekinesis, which came later. Stupid opener.

* The Umbrella board of directors threatening to take the antivirus project away from the crazy doctor. Why even threaten? If they have someone better at Umbrella who can do the job, why are they even wasting time with the crazy doctor? They don't even like him. The entire interplay of how the Umbrella corporation functions makes no sense. But then I suppose that's why those dumbasses got the entire human race infected and turned into zombies.

* Ali Larter (is hot) having doubts about the plan to take the caravan to Alaska. What was her backup plan? Keep driving around the desert and wait to be eaten? They already established that they had drained all the small towns dry of supplies. Yet the leader of the caravan needed to be convinced to take plan B, a chance at hope, instead of her current plan A of prolonging the inevitable death by zombie consumption.

* Las Vegas buried in sand. WHAT?! First of all, that could never happen in five years. Second, yes, Vegas is in the desert in Nevada, but it's a dry desert. It's not like the surrounding desert is dunes of sand like the Sahara or Tunisia. The explanation of "no one was here to keep the sand away" is retarded. No one in Las Vegas today "keeps the sand away." It makes no sense. Also, it doesn't seem like the filmmakers have ever been to Vegas. There were no casinos or buildings in between the Venetian all the way to the Stratosphere. And when the caravan parks they park in front of the Paris, send someone up the Eiffel Tower, but suddenly they're at the Venetian? Those casinos are at least a half mile apart.

* The scene that made me laugh out loud was when the crazy doctor injected a zombie with antivirus and restores a portion of his humanity temporarily. First, he hands him a cell phone. Zombie remembers how to use it. Then a digital camera. Oh sure, the zombie knows how that works. Point and click. After the zombie proves he can recognize complicated items, THEN he hands him the child's toy! "Circle... not fit in square? GRRAARRR! I'll kill you!"

I very quickly got tired of the lousy one-liners passing for dialogue:

"Sorry about this, Stevie."
"Maybe the desert took it back."
"Good thing we like a challenge."
"I wish I had a smoke."
And so forth. Most of the bad one-liners were delivered in Milla Jovovich's husky "I'm such a bad ass chick" voice. Obviously one doesn't attend Resident Evil movies to hear witty banter but it was still annoying.

There was other stuff I thought was stupid but I can't remember now. Still, though, the movie was all right.

Oh, so what the hell ever happened to Jill Valentine?
Posted by Back of the Head at 1:27 PM