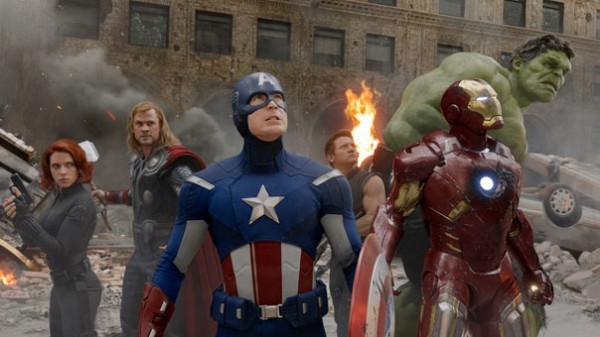 On The Simpsons, Milhouse once lamented, "When are we gonna get to the fireworks factory?!" For Marvel's The Avengers, the answer is about two hours in, although a lot of shit blows up well before the spectacular alien invasion closes the picture. Four years and five previous Marvel movies in the making, writer-director Joss Whedon helms The Avengers into movie theaters to a global audience that largely made up its mind to love it well before anyone in the movie ever utters the famed battlecry, "Avengers Assemble!". Which, by the way, never happens. The Avengers are here and they will kick ass and save the world. And if they can't, they'll damn sure avenge it, whatever that means.

A lean, mean fighting machine, the two and half hours of The Avengers isn't. Culling from previous plot points from Thor, a cosmic cube of limitless energy called The Tesseract has landed on Earth and is in the possession of SHIELD, the paramilitary security force of men in black and attractive women in tight-fitting jumpsuits headed by Col. Nick Fury (Samuel L. Jackson). Loki (Tom Hiddleston), the Asgardian god of mischief and (adopted) brother of the Mighty Thor (Chris Hemsworth) was rescued from his predicament of floating through space by a bunch of reptilian aliens. He gets a pretty sweet deal from them: go to Earth, get the Tesseract, and use it to open a wormhole so that they can invade the Earth, and after they kill all humans, Loki gets to rule what's left. Loki is down with this plan but then, he's a god with no other options.

To achieve his end of the deal, Loki comes to Earth and mind controls some SHIELD folks, including Thor alumnus Stellan Skarsgard and SHIELD's expert marksman Hawkeye (Jeremy Renner). They steal the Tesseract and head off to parts unknown (Germany, it turns out). In response to this imminent global threat, Fury calls upon The Avengers Initiative, which was an idea of gathering up the world's burgeoning superpeople and getting them to fight as a superteam. This idea was scrapped at the behest of "The (Jedi) Council", a bunch of faces on screens lead by Powers Booth, who yell at Fury and bark orders at him. Orders Fury feels free to ignore at his whim, which he does throughout the movie. Whenever the Council overrides Fury, Fury just launches RPGs at their jets and overrides them right back. This is some organization protecting us, SHIELD is. At least our taxes are going to one bad ass looking Helicarrier.

In Marvel Comics tradition, the heroes immediately start fighting. Thor, Iron Man, and Captain America get acquainted by using their superpowers to beat the bejezzus out of each other. Once they're done throwing Uru hammers, repulsor rays, and indestructible vibranium shields, they just argue amongst themselves with spot-on hilarious patented Joss Whedon snappy patter. What they should be doing is looking for the Tesseract, which Stark and Banner are onto, except they never do locate it. They get too distracted by arguing. It doesn't matter anyway since Loki's people just conveniently put it on the roof of Stark's Tower in New York City (complete with convenient force field that can't be penetrated until the exact moment Black Widow can, right when she needs to.) It's also doubtful whether Loki himself can fully explain just exactly what he was doing, beat for beat, during the entire movie. He was not lacking for seething speeches of his superiority, but what, pray tell, was he doing besides swinging a scepter around and getting into shouting matches with Thor and Tony Stark?

Once the heaping amount of exposition is dealt with, The Avengers gets down to business, first with an assault on the SHIELD Helicarrier that catches our heroes with their pants down. Except for the Hulk, who gets unleashed for the first time, and his purple pants stay on. A death trap designed for the Hulk by SHIELD gets used on Loki and then ends up trapping Thor, but said death trap - dropping the superhuman 30,000 feet - should probably go back to the drawing board since the super beings it was designed to trap don't end up in death, not by a longshot. However, the heroes learn to work together and save the Helicarrier. There's some dissension when the Avengers discover SHIELD wasn't just using the Tesseract as a means to develop renewable energy but to also develop super weapons to kill super beings and aliens, but no one seems too upset about it once the aliens finally do arrive in New York City.

A weakness of the previous Marvel movies have been underwhelming third acts, but The Avengers saved its best for last, with a sustained 30+ minute battle sequence of furious scope and wanton destruction.When the Avengers assemble in New York to repel the aliens and their enormous armored flying eel creatures, The Avengers settles into a groove of non-stop superpowered action that makes the long, strange journey of getting there ultimate(s)ly worth it. The aliens, indistinguishable, personality-devoid, and, it turns out, controlled by a central mothership, are basically CGI bowling pins for the Avengers to knock down.

Every superhero is given moments of marvelous derring-do: Captain America confidently assigns battle strategies and holds the street level, Black Widow and Hawkeye perform more human than human stunts of bravery, Iron Man zips through the skies taking out aliens and giant armored eels alike, Thor calls down the thunder, and the Hulk -- the Hulk absolutely steals the show. (Ignore, if you wish, the plot hole of Banner somehow making it to the New York war zone on a Vespa despite being separated from the group by several hundred miles.) Whedon's Hulk is a mean, green smashing machine delivering the two biggest laugh out loud moments in the entire picture, at the expense of Thor and his brother Loki. After two previous cinematic misfires, the pure, perfect essence of the Incredible Hulk in a motion picture is finally captured by Whedon and the formula is ingeniously simple: instead of human soldiers hunting Hulk, simply let Hulk smash alien soldiers and demi-gods without regret or fear of reprisal to his gamma-irradiated heart's content. Satisfying and hilarious.

Whedon, the creator of Buffy The Vampire Slayer and one of Hollywood's greatest advocates of strong female characters, devotes his emphasis on the only girl Avenger, Black Widow, the voluptuous, mournful Russian spy with "a particular skillset" and "a lot of red on her ledger". (Uh huh.) Operating in his favored wheelhouse, Whedon gives Black Widow a tragic backstory of death and regret, including an ill-defined torrid past with Hawkeye, and even a Hannibal Lecter/Clarice Starling-like scene with Loki. Whedon then apes through familiar Buffy ground, with Black Widow fighting off demons, monsters, and aliens, including a pulse-pounding sequence of being stalked and nearly killed in the cramped tunnels of the Helicarrier by the rampaging Hulk.  Whedon's mission was clear: make Black Widow essential the way she never was in Iron Man 2. Please like Black Widow enough after this and she may get her own movie after all, a first for a superheroine under the current Marvel/Disney regime.

Despite the overwhelming odds against them, and the final act of heroic sacrifice by Iron Man that ended the invasion with a big bang, there's never truly a sense the Avengers can or will fail. They don't. They get tired and beaten up during the fight, sure - them's a lot of aliens - but the Avengers keep on ticking from all the lickings they're given. The Avengers suffers a tragic loss, the beloved Son of Coul (Clark Gregg) falls in the line of duty, which is a damn shame since he was the only SHIELD agent with a discernible personality. Midtown Manhattan is leveled to the cost of billions and billions of dollars, but the Avengers have other concerns. They'll assemble again, in 2014, when a Mad God from Titan in love with Death, comes calling like he promised over the closing credits.
Posted by Back of the Head at 1:10 AM