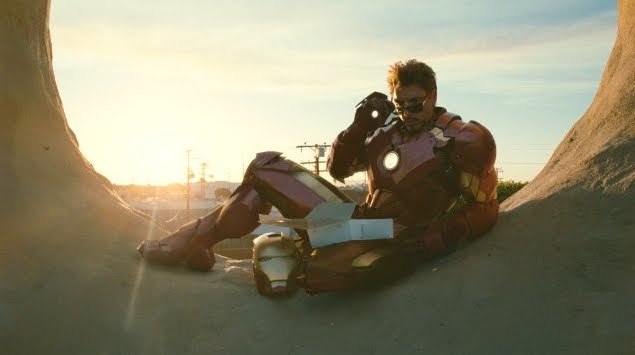 In Iron Man 2, the party started in the first Iron Man two years ago continues with gusto. Robert Downey, Jr. is once again front and center as comic book cinema's most lovable rogue Tony Stark. He not only doesn't miss a beat, he finds a couple of new steps (just not 12 steps). After shocking the world with his proclamation that he is Iron Man, the sequel picks up right where the original left off, then rockets six months into the future, with Stark reveling in the adulation of the masses and then succumbing to his personal demons and excesses as new enemies align against him at home and abroad.

Director Jon Favreau and screenwriter Justin Theroux throw just about everything they can think of into Iron Man 2. They say you can't have too much of a good thing; Iron Man 2 tests that old adage. There's more of everything this time around - more action, more characters, and a lot more movie. Except for Jeff Bridges' evil Obediah Stane, just about everyone from Iron Man is back for the sequel, including Stark's cuddly helper robots, Paul Bettany as Jarvis, the artificial intelligence of Stark's Malibu mansion, Clark Gregg as SHIELD agent Coulson, and even Leslie Bibb as the ballbusting reporter Stark slept with in the first movie. (Stan Lee gets his obligatory cameo, this time as Larry King of all people.) Though bloated at the seams with copious helpings of plot and character back stories, Iron Man 2 still delivers all the heavy metal Marvel mayhem you could want - you just have to wait a little bit longer for most of it.

Gwyneth Paltrow's long-suffering Girl Friday Pepper Potts is now CEO of Stark International. We get it: It's tough to be Pepper Potts! Wrangling Tony Stark and keeping him from killing himself, destroying his company, and/or both is a full time job in and of itself. Paltrow again plays a terrific straight woman to Downey, which requires her to maintain a stern frowny pout and tsk tsk disapprove while Downey runs amok, all the while still selling to the audience that she loves and cares for this guy. Fortunately, Stark only has eyes for Pepper; well, mostly, unless his new assistant is in the room, but that's just Tony being Tony.

In Iron Man, we all remember James Rhodes gazing wishfully at the silver War Machine armor and saying "Next time, baby". Little did we know then that when next time rolled around, it wouldn't be Terrence Howard donning the armor as James "Rhodey" Rhodes. Don Cheadle nicely stepped into the role and, except for some amusing meta dialogue when he enters the movie ("I'm here. Deal with it."), Cheadle quickly makes the audience forget there was another Rhodey. Cheadle, like Paltrow, spends most of the movie exasperated by Stark. Even after their armored mano e mano slugfest and Rhodes betraying Stark by taking off with the War Machine armor and turning it over to the US Government, it never even occurs to Stark to hold a grudge. When Cheadle gets in on the action, fighting side by side with Iron Man as War Machine, Iron Man 2 really rocks. It's the ultimate show of boys with toys.

Even with Mickey Rourke as Ivan Vanko (aka Whiplash, but the movie doesn't call him that) and Sam Rockwell as Justin Hammer, it still turned out to be tougher than expected to replace Jeff Bridges as Iron Man's new arch villain. Rourke provides both brawn and brains as a tattooed, monosyllabic (unless you speak Russian) brute who's also a genius nuclear physicist. Rockwell is more entertaining as Stark's business nemesis Justin Hammer, an odious slickster with a motormouth, a lot of money, and a fondness for weapons, but no talent for technology. Neither ever seem quite up to taking down Tony Stark, even when they join forces. Rockwell turned out to be the one completely out of his depth while Rourke, sporting an armored suit of his own with his specially designed laser whips, couldn't hang with being double teamed by Iron Man and War Machine. Stark and Rhodey beat Vanko awfully fast with their combined repulsors-into-a-blastwave move, but using their best tactic up front was foreshadowed by Iron Man using his spinning laser trick to wipe out Vanko's Iron Drones and War Machine urging him to "lead with that next time!"

Even though Scarlett Johannson has two names in Iron Man 2, curiously, neither of them is "Black Widow". Johannson is absolutely smashing to look at as SHIELD agent Natasha Romanov, working undercover as Tony Stark's new assistant under the name Natalie Rushman, and she fills out Black Widow's black spandex groin-grabbingly well. Johannson has the requisite sexual tension with Downey that never goes anywhere, nor does her fleeting professional rivalry with Paltrow. (One of the funny lines, after Johannson and Jon Favreau as Happy Hogan both side with Paltrow as CEO of Stark International, is Downey quipping, "So I lost both kids in the divorce?")

Eye candy and her one ass-kicking fight scene aside, when you think about it, Johannson's character is completely superfluous. We don't learn much about her, don't really develop any empathy for her, and she doesn't really do much in the movie. If Natasha Romanov/Natalie Pushman was cut out of Iron Man 2 entirely, it wouldn't hurt the story at all. Johannson's one major plot point is breaking into Hammer Industries in act three and reprogramming the War Machine suit so that Cheadle is back in control of it, but that could have been accomplished a number of different ways if Johannson's character didn't exist. In fact, why did Johannson stop at reprogramming War Machine? Why didn't she also reprogram Rourke's Iron Drones to not try to kill Stark and Rhodes, instead of just watching all the action on TV? Seems like Black Widow really dropped the ball there.

We only saw a few fleeting seconds of Samuel L.Jackson as Nick Fury in a tag at the end of Iron Man's credits, but in Iron Man 2, Nick Fury is positively ready for his close up. No one seems more impatient for the Avengers movie than Sam Jackson, who revels in his expanded screen time. I loved the scene in Randy's Donuts where Stark, Fury, and Romanov are all sitting in a booth chatting away while wearing their costumes. I got even more geeky joy out of that than from all the scenes of Iron Man and War Machine blowing up Iron Drones.

With the origin story out of the way, Favreau and Theroux have their work cut out for them in not only deepening the story of Iron Man and his universe but laying the necessary groundwork for the larger Marvel Movie Universe and the sequels to come in 2011 and 2012. Not only do Iron Man 2's credits end with a shot of the Mighty Thor's hammer Mjolnir, but a prototype of Captain America's shield is put to an amusing practical use in Stark's lab. (The lack of reference to Edward Norton and his Incredible Hulk does make one wonder what the Hulk's status is going forward.) There is a lot of ground Iron Man 2 has to cover in its two hours, to the disservice of the narrative as a whole.

After Vanko nearly kills Stark with his laser whips in Monaco, Iron Man 2 greatly meanders in its second act. Essentially what happens is Stark goes off into a corner to figure out how to keep his arc reactor from killing him and ponder what his father Howard Stark (John Slattery with a welcome cameo) is trying to tell him from beyond the grave. Meanwhile, Hammer and Vanko commiserate in trying to get Hammer's Iron Drones up and running, and they don't get along. Meanwhile, Pepper has to explain away Stark's behavior and keep his company running. Meanwhile, Rhodes has to explain away Stark's behavior and keep the government from taking his armor.  Meanwhile, Stark gets hammered at his birthday party, pees in his suit, and blows up half his house, then gets put by SHIELD in the most incompetent form of house arrest ever where Stark leaves and comes back without SHIELD batting an eye. Meanwhile, while all those meanwhiles are going on, there's not a lot of action happening until the big showdown at Stark Expo at the end.

Comedy was abundant: The funniest scene of Iron Man 2 is Stark grandstanding in front of a Congressional hearing chaired by puffy-faced Senator Garry Shandling, hacking into Justin Hammer's video presentation, and rolling out of there scot free while Shandling curses "Fuck you, Mr. Stark!" Since the Tony Stark character was originally modeled after Howard Hughes, it's a hilarious parody of when Hughes was forced to defend himself against charges of war profiteering in front of Congress (as seen in Martin Scorsese's The Aviator). Shandling gets a little revenge on that "prick" Stark in the end, even while he's being humiliated by honoring the guy he hates most.

Of all the action scenes involving Iron Man, War Machine, Whiplash, Iron Drones, and Black Widow, the funniest action scene - Jon Favreau's prolonged fistfight against one of Hammer's security guards - was also the best simply because it was the only fight that was realistic. The expanded role Favreau gave himself is one of Iron Man 2's highlights. I also adored the "fuck with the audience" reveal of Justin Hammer's super weapon, "The Ex-Wife", where Hammer launched into a monologue about its destructive potential and when fired by War Machine, it was a total dud that bounced harmlessly off Rourke's armor. Brilliant.

As charming and fun as Downey plays Stark, the most interesting aspect of the man who is Iron Man is that for most of the movie, he's dying. Stark doesn't just worship at the altar of technology, he's the deity of technology in the Marvel Movie Universe, and the technology that keeps him alive - that glowing arc reactor in his chest - is also killing him. Stark's devil-may-care behavior towards his march towards oblivion brings out the worst aspects of his character, including a riff on the famous "Demon in a Bottle" comic book storyline about Stark's alcoholism. Ultimately, I'm glad Favreau chose to touch upon "Demon in a Bottle" but not go down that road. Tony Stark destroying his life because of alcoholism would be a downer of a summer movie. Iron Man works best when Tony Stark is upbeat, soaring the skies, and, with his rakish glee, making the audience believe that anything is possible with technology.

Iron Man 2 is genuine entertainment. Iron Man and Iron Man 2 together create the most enjoyable comic book movie universe for an audience to spend time in. It's always a sheer pleasure to hang with Tony Stark and his peeps. They're such fun characters in an inviting, exciting universe. Even after the Avengers Assemble, I sure hope we get another chance to get armored up with Iron Man. There just ain't no party like a Tony Stark party.

An Opposing Viewpoint: Iron Man Returns
Posted by Back of the Head at 7:19 PM