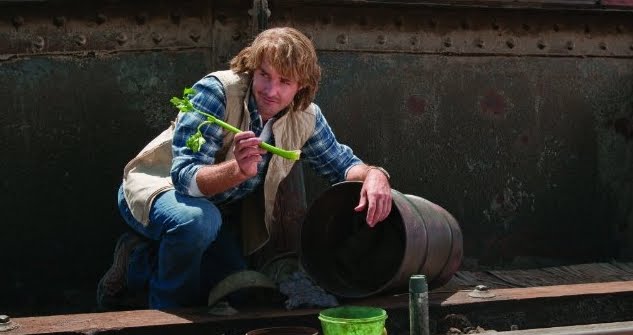 "It's time to pound some Cunth!"
** SPOILERS **
Naturally, when attempting to turn a series of Saturday Night Live skits into a 90 minute action comedy, the main concern is whether the joke can last more than the two minute length of the original skits.  MacGruber successfully stretches its jokes out to about a good 30 minutes. A third of MacGruber is really, really funny if you like dick jokes, cock jokes, suck your cock jokes, cunt(h) jokes, jokes about ripping throats, jokes about fucking ghosts, jokes about sticking celery up your ass, jokes about cutting dicks off and eating them, jokes about shitting in fountains, jokes about peeing on corpses, jokes about shitting on corpses, etc. (I like.)  MacGruber more than earns its hard R. The "action movie" part of MacGruber is less successful or interesting. There is never any doubt that MacGruber will eventually stop his arch enemy, the terrorist Dieter Von Cunth, from launching a nuclear missile at Washington DC. The action part of MacGruber's action comedy is really besides the point; it's just the clothesline to hang the aforementioned filthy jokes on. Will Forte, who wrote the screenplay with director Jorma Taccone (Hot Rod, which I loved) and John Solomon, is totally out there as MacGruber. Honestly, Mr. Forte, I never need to see your bare ass again - the audience never asked for that particular privilege but you more than gave us our money's worth. Ryan Phillipe was also very good as the capable solider and straight man reacting to MacGruber's incompetence and desperate sexual bargaining. I especially liked the human shield gag, and MacGruber spinning him around. (Don't need to see your bare ass ever again either, Mr. Phillipe.)  Val Kilmer's humor was comparatively more subtle as Dieter Von Cunth, but yes, I would like some potstickers and a Molson, being no stranger to substantial CostCo runs. I liked how the first five minutes of MacGruber had Powers Booth explaining MacGruber's awesome military achievements and then the rest of the movie completely goes against all that set up as we watch MacGruber fuck up again and again. Despite Will Forte, Kristin Wiig and Ryan Philippe hosting WWE Monday Night RAW a few weeks ago, I'd totally forgotten Chris Jericho, Kane, MVP, Mark Henry, and The Great Khali (all credited as such) were in MacGruber. There wasn't nearly enough of them, and they made a hilariously explosive exit from the movie reminiscent of Vince McMahon's "death" a couple of summers ago on RAW. But of the WWE guys, it was the Big Show and his liplocking who completely stole the show. MacGruber's all-1980's pop soundtrack is the jam and Blaupunkt couldn't have asked for better product placement.
Posted by Back of the Head at 2:48 PM