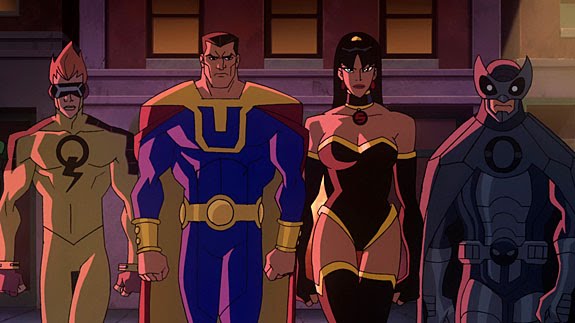 A heroic Lex Luthor from a parallel Earth recruits the Justice League to join him in stopping the evil Crime Syndicate on his world.  What results is action, very good action where Superman, Wonder Woman, Green Lantern, Martian Manhunter, and The Flash get to utilize the full spectrum of their superpowers against foes who are their physical equals.  In between the many battle sequences, the screenplay by Dwayne McDuffie lobs some intriguing ideas at the audience: Whether or not the Justice League has the ethical right to travel to another reality and impose what they believe is justice (they do, of course, or else the movie would be over in ten minutes). Batman actually sits the first half of the movie out in protest until the evil doppelgangers The Crime Syndicate jump to "our" Earth and invade the JLA Watchtower.

The structure of the Crime Syndicate, with the core villains Ultraman, Superwoman, Owlman, Power Ring, and Johnny Quick has the heads of Families, each overseeing a battalion of superpowered "Made Men" was a compelling idea. (I thought the portrayal of Ultraman as a Tony Soprano-type with an Italian accent was pretty silly, but I particularly enjoyed the evil Wonder Woman doppelganger in charge of the evil versions of the Captain Marvel Family.) The Owlman reveals himself to be the villain of villains, with a nihilistic scheme to destroy every Earth, which is ultimately foiled by his counterpart Batman. Of course, the fate of the multiverse falls to two guys dressed as animals having a fistfight on an alien world, but the philosophical dialogue from Owlman contains some fascinating theories about choices and their impact on the creation of parallel worlds.  Batman also gets the crap kicked out of him quite a bit by the Crime Syndicate; he must have guessed that would happen hence his initially trying to sit this crisis out. (Batman later pulls a morally questionable trick on Johnny Quick, bamboozling him into taking The Flash's place in a suicide mission - all to prove he does "like" Flash.)

The voice acting by Mark Harmon, William Baldwin, and James Woods is very fine. Woods is particularly good as Owlman. In a 75 minute movie with a couple of dozen characters, some, like Green Lantern, get the short shrift. Taking center stage are villainous romance between Superwoman and Owlman that indicated by its maturity this movie wasn't particularly intended for children, while Martian Manhunter gets a love subplot with the President's daughter which ends rather lamely - even Wonder Woman calls J'onn J'onzz out for being an idiot. Meanwhile, Wonder Woman makes the most of the spotlight she's handed in the best portrayal of the Amazon Princess (Lynda Carter aside) I may have ever seen. If I came away from Justice League: Crisis on Two Earths with one thing, it's an acceptable explanation for how Wonder Woman got her invisible jet and why she would want one.

The Flash: "Why do you need an invisible jet anyway? You can fly."
Green Lantern: "You drive a car."
The Flash: "That is so not the point."
Posted by Back of the Head at 9:33 AM