No Time To Die

NO TIME TO DIE 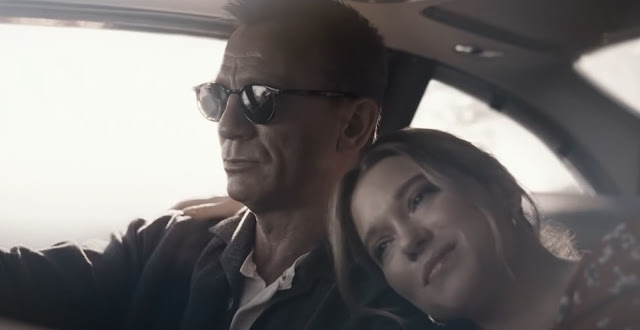 ** SPOILERS **
You Have All The Time In The World
The final act is often the hardest to get right but director Cary Joji Fukunaga's urgent and stunning No Time To Die gets it so right. No Time To Die is the fifth and final movie starring Daniel Craig as James Bond and while I have an overwhelming love for and devotion to Skyfall, No Time To Die outdoes it by delivering something 007 has never truly had: a definitive ending. But en route to that end - Bond's end - is one more globe-hopping adventure - Matera, Italy, Jamaica, Santiago, Cuba, London, Norway, and a mysterious island between Japan and Russia - where Bond saves the world from the 21st-century threat of deadly nanobots. More importantly, James Bond faces the scope of his dangerous life as a Double-0 agent and finally confronts both his own mortality and the chance to leave something (and someone) behind.
Daniel Craig has never been better as James Bond. Well-aware that his and the audience's hearts weren't in Spectre, Craig does not waste this opportunity to go out with a kiss-kiss bang-bang. In No Time To Die, Bond is the happiest he's ever been on holiday with Dr. Madeleine Swann (a fantastic Lea Seydoux) when he's ambushed by Spectre agents sent by his old enemy (and ex-brother, adoptive), Ernst Stavro Blofeld (Christoph Waltz). Bond believes Madeleine betrayed him and he's heartbroken. (Although as Blofeld later taunts James, "You were always so sensitive!") Using his indomitable Aston Martin DB5, Bond annihilates the Spectre agents, puts Madeleine on a train, and tells her she'll never see him again. And he meant it. For at least the third time in Daniel Craig's quintology, Bond quits MI6 and he means it.
Retired in Jamaica five years later, Bond is now a man with unlimited time to kill but at least no one is trying to kill him, for once. Until James' old spy buddy Felix Leiter (Jeffrey Wright) comes calling. Felix temps Bond back into action but James meeting M's (Ralph Feinnes) efficient new 007, Nomi (Lashana Lynch) also had something to do with it. From there, No Time To Die puts its foot on the accelerator and takes us on a two-hour thrill ride. Bond walks into a trap in Cuba alongside Paloma (Ana de Armas), the most cheerfully gorgeous Bond Girl of Craig's 007 era. Ana de Armas is so good at drinking, quipping, and fighting alongside James, we wish she stayed for the whole movie. But the mystery of who's working against both James Bond and Spectre, which led to a trap for Bond turning into the massacre of every Spectre agent, leads right back to Ernst Stavro Blofeld. But the real key to this mystery is Madeleine Swann.
In the film's brilliant opening flashback, young Madeleine was attacked by No Time To Die's new twisted villain, Safin (Rami Malek). Safin's family was wiped out by Madeleine's father, Mr. White (Jesper Christensen), on Blofeld's orders and Safin came to White's Norway home looking for revenge. After killing Madeleine's mother, Safin becomes infatuated by the young girl and he saves her from drowning in ice (an echo of Bond nearly drowning in ice during Skyfall's climax). Decades later, Safin is back to finish the job he started and use Madeleine to kill Blofeld with his bioweapon that only works on a specific target's DNA. But Madeleine has another secret Bond discovers: they have a four-year-old daughter named Mathilde (Lisa-Dorah Sonnet). At first, Madeleine lies that James isn't the father of the blue-eyed girl, but he is and he knows it. Mathilde, James Bond's first offspring in any movie, is a bombshell that sets No Time To Die apart from every Bond movie and enables the movie's incredible ending.
No Time To Die's finale, like everything that builds up to it, is absolutely spectacular. Bond and Nomi team up to assault Safin's secret island base, where the madman plans to wipe out entire demographics of people with nanobots, and to save the kidnapped Madeleine and Mathilde. The action is visceral and first-rate as 007 fights his way through scores of soldiers in order to open the blast doors so that missiles can wipe out the island. But Bond is injured by Safin and, worse, he's infected with nanobots targeted to Mathilde and Madeleine's DNA. Even if he got off the island, touching either the woman he loves or his daughter would kill them both. And thus, James Bond makes the ultimate sacrifice, one that feels unthinkable from any of his predecessors from Sean Connery to Pierce Brosnan - Bond willingly dies so that Madeleine and Mathilde can live. Daniel Craig's storied and incredibly successful run as James Bond explosively ends as 007 gives up his life to ensure his daughter can have hers.
A courageous and majestic James Bond story like no other, No Time To Die not only wraps up the serialized story about Daniel Craig's 007 that began with Casino Royale, it also gracefully genuflects to the greater franchise, with special reverence paid to On Her Majesty's Secret Service. Bond repeats the ominous promise, "We have all the time in the world" to Madeleine as Hans Zimmer's score evokes John Barry's booming On Her Majesty's Secret Service theme and weaves in Louis Armstrong's "We Have All The Time In The World." As missiles are about to rain down upon him, James Bond promises Madeleine that "You have all the time in the world." This is Bond's most important promise of all and one he means to keep. With this incredible final chapter where everything feels earned and definitive, Cary Joji Fukunaga and Daniel Craig give 007 a legacy he never had before and close out the Craig Era of James Bond with an unforgettably poignant and emotional ending.
Posted by Back of the Head at 6:47 PM

Venom: Let There Be Carnage

VENOM: LET THERE BE CARNAGE

** SPOILERS **
Venom: Let There Be Carnage is what everyone dreaded the first Venom movie would be. Director Ruben Fleischer's Venom was an oddball entertainment with the bizarre relationship between Eddie Brock (Tom Hardy) and Venom (Tom Hardy) at its center. In contrast, Andy Serkis directs Venom: Let There Be Carnage and strips away the connective tissue that made the original Venom a movie, leaving only the guts (but no blood, because Let There Be Carnage is PG-13). Venom: Let There Be Carnage is the equivalent of three Saturday morning cartoons smashed together with a threadbare plot (credited to Tom Hardy and Kelly Marcell) that was probably scribbled on a cocktail napkin during an all-night bender. And yet, despite my loathing this cacophonous misery, Carnage literally says, "Let there be Carnage!" in the movie, and saying the title of the movie in spoken dialogue nets the film an automatic four stars from me.
As set up by Venom's ending, Let There Be Carnage is about a serial killer named Cletus Kasady (Woody Harrelson, who has nothing to play and plays that nothing right off a cliff). Cletus is holed up on death row in San Quentin but he bites reporter Eddie Brock and swallows some of the Venom symbiote. The result is Cletus is transformed into his own, even grosser, more prehensile tail-y, space monster named Carnage. Cletus/Carnage murder their way out of the clink and head straight for San Francisco to reunite with Cletus' childhood love, Frances Barrison (Naomie Harris). Barrison is also a superpowered freak who can emit sonic screams and she's been locked up her whole life. However, Carnage, Venom, and all of these goopy symbiotes only have two fatal vulnerabilities: fire and really loud noises. So naturally, Carnage isn't too happy that Cletus' missus can kill him if she opens her yap. Three's definitely a crowd there. But the bottom line is Carnage sucks; he's a hideous, terrible, eyesore who's somehow both barely in the movie yet in too much of the movie.
Meanwhile, Eddie, who was a loser in the first movie, is having a career renaissance where he's now the most important and respected reporter in San Francisco, despite still being a swarthy, twitchy weirdo who is clearly hiding a psychotic pile of murderous ooze beneath his skin. Venom is bored of being with Eddie and how controlling his human host is. Eddie won't let Venom eat human brains and he keeps shooting down Venom wanting to call their dynamic duo the "Lethal Protectors." It's not easy being in a symbiotic/romantic relationship with a symbiote and, just like in any rom com, Eddie and Venom break up and go their separate ways for a while. Unfortunately, Eddie has no heterosexual outlet with a human female to turn to because his ex-fiancee, Ann Weying (Michelle Williams), is now engaged to Doctor Dan Lewis (Reid Scott), who, strangely, turns out to be the most heroic person in the movie. For his part, Venom has a scene where he hits a rave and has a fantabulous emancipation of Venom - or he tries to, anyway, but Venom soon realizes he literally can't live without Eddie.
What passes for a plot in Venom: Let There Be Carnage is summed up thusly: Cletus wants to kill Eddie/Venom, marry Frances (who also got a codename, Shriek), and then kill Ann, Detective Mulligan (Stephen Graham), the cop who shot Frances years ago but didn't know she survived, Dan, and the priest who was going to marry him and Frances, not necessarily in that order. The movie culminates in a church, not unlike Spider-Man 3, where the ringing of a giant bell helps kill Carnage, just like how Venom (Topher Grace) was defeated in Sam Raimi's unloved threequel. To get to the church on time (record time, almost, since the movie is only 90 minutes long), Venom: Let There Be Carnage packs a lot of nonsense into its short runtime, and it rockets through scenes that barely even qualify as scenes. But that's okay, I guess, since this thing barely qualifies as a movie. Every scene with Michelle Williams, who is barely in the movie, mind you, is made more baffling when one remembers she's been Academy Award-nominated four times.
So why sit through and endure Venom: Let There Be Carnage at all? Well, the Sony Spider-Man Universe is in a symbiotic relationship of its own with Marvel Studios and they finally pulled the trigger on bringing the universes together. In Venom: Let There Be Carnage's headscratcher of a mid-credits scene, Eddie and Venom are in bed together on a beach vacation when Venom randomly starts waxing philosophical of all of the crazy things he's seen traveling through 80,000 lightyears of space. Venom decides to show Eddie some of what he's seen but somehow, they end up transported into a hotel room in the Marvel Cinematic Universe right at the end of Spider-Man: Far From Home. Specifically, the moment when the MCU's J. Jonah Jameson (J.K. Simmons) publicly reveals Peter Parker (Tom Holland) is Spider-Man. How did that happen? How does any of this work? Who cares. At least the mid-credits scene clocks in as the only memorable thing in Venom: Let There Be Carnage, though it's not as standout a moment as when Tom Hardy crawls into a lobster tank and starts eating crustaceans in the first Venom.
Posted by Back of the Head at 7:14 PM