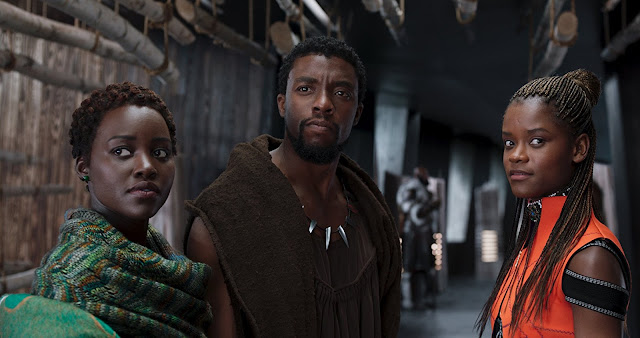 Greetings from Wakanda! It's a nice place to visit and... goddamn it, why can't I live here forever? The Marvel Cinematic Universe has taken us to far-flung locales like Asgard, Knowhere, Sakaar, and uh, Queens, but it turns out the greatest destination of all is right in our own backyard. Well, Africa, which secretly houses the hidden nation of Wakanda. Director Ryan Coogler's Black Panther builds a sensational and inviting new universe within the Marvel Universe and populates it with a noble king, a dastardly but provocative villain, dynamic and inspiring women, and only two white people. (Okay, three, counting Bucky Barnes.) Truly, Wakanda is the best place on Earth.

We first met and immediately grew to love T'Challa (Chadwick Boseman) in Captain America: Civil War, but Black Panther only deepens our admiration for the Wakandan King. Newly crowned after the death of his father King T'Chaka (John Kani), T'Challa fends off two challengers to his throne while hunting down an old enemy, Ulysses Klaue (Andy Serkis), the devious black market smuggler who has spent decades heisting Vibranium, the strongest metal on Earth, which is only found in Wakanda. Aside from an explosive jaunt in South Korea (and trips to Oakland, CA), the bulk of Black Panther vividly explores Wakanda and asks pointed questions about the sins of its past and its hopeful future.

Soon, T'Challa discovers a long-buried secret of his father's: a tragic tale of fratricide and the existence of his American-born cousin, Erik Killmonger (Michael B. Jordan, all amazing swagger). The gradual reveal of Killmonger's history and why he covets the Wakandan throne elevates Black Panther to another level of superhero movie altogether. As does the thoughtful political debate the film inspires, where T'Challa wrestles with whether to shed Wakanda's millennia-held guise as a poor Third World nation and use their Vibranium technology to benefit the world. Meanwhile, Killmonger has his own ideas about that: conquest, and arming people of African descent with Vibranium weapons to forge a Wakandan Empire. T'Challa and his cousin Erik are two sides of the same coin, and their conflict is thrilling, deeply personal, and by the end, genuinely moving.

The Black Panther has a ball playing with all of the toys at his disposal, gleefully provided by the scene-stealer Shuri (Letitia Wright), T'Challa's irrepressible teenage sister who also happens to be the smartest person on the planet. Along with Shuri, the king is also surrounded by the most resplendent female cast ever in a Marvel movie. His mother Ramonda (Angela Bassett) is noble and proud. Wakanda's greatest warrior Okoye (Danai Gurira), the leader of the elite all-female Dora Milaje, is every bit as formidable as the king she protects. Best of all, Nakia (Lupita N'yongo) shatters the "Marvel Girlfriend" tradition by being devoted to her king while remaining independent, brave, globally-minded, and heroic in a fight. Nakia is as personally responsible for saving Wakanda as T'Challa is, a fact that does not escape his attention or appreciation.

Black Panther is not just a great Marvel superhero movie, it's one of the best-ever examples of the genre. Coogler stages thrilling action set pieces and not just honors Marvel's proven comic book movie tropes but also invokes classic James Bond movie iconography with a "Q scene" of T'Challa receiving upgraded tech, an eye-popping casino action sequence, and a glorious Bond-like end credits sequence. (Black Panther is as great a Bond movie as Skyfall, in fact.) The third act is reminiscent of and betters The Phantom Menace, with three simultaneous action sequences: a battle between two armies in a field, an aerial dogfight, and the hero and villain battling in a high-tech subterranean location that seems to descend into infinity. Through it all, we heartily cheer on the heroes while the villains maintain understandable motivations as they commit their nefarious acts. Also, Black Panther is the only superhero movie where two of the only three white people in it are missing their left arms. Like Wakanda itself, that's a record that should remain forever unbroken. 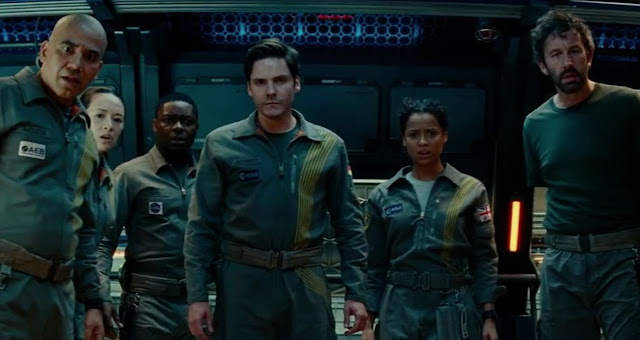 Show of hands if the origin and backstory of the Cloverfield monster from 10 years ago was a pressing concern to you. All right, everyone at Bad Robot, put your hands down.

The Cloverfield Paradox, long delayed and suddenly appearing on Netflix without warning like the giant monster did in Manhattan a decade ago, used to be a sci-fi film called God Particle. On a space station, an international bunch of science-y types are trying to solve the Earth's enegy crisis by firing a particle accelerator in orbit. The plan is to produce limitless clean energy which would prevent the wars brewing across all nations. Somehow, when they fired their particle accelerator, they made the Earth disappear. And somewhere along the way, J.J. Abrams and Bad Robot got ahold of God Particle and decided to Cloverfield it up. They took a hacksaw to God Particle and then shoehorned the Cloverfield backstory into it. The shoehorn was emblazoned with the Bad Robot logo and came with a coupon for a free Slusho.

The hack'n'slash is evident from the opening credits, which are comprised of multiple cuts of scenes that probably explain the story better and deepen the characters. Instead, what we're left with is a half-cooked sci-fi thriller with very little explanation of what's happening. The scientists on board the now-rebranded Cloverfield Space Station - it's never made clear what most of their jobs are besides that David Oyelowo is the mission leader and Chris O'Dowd is the doofy mechanic whose arm gets painlessly ripped off - are faced with a lot of weird happenings. Elizabeth Debicki suddenly materializes within a wall, despite the fact that no one has any idea who she is. Meanwhile, a Russian guy and a German guy played by Daniel Bruhl are reentacting World War II in the year 2028 and really hate each other. Each claims the other is a traitor, and depending on which parallel universe they are actually in, they both could be right.

Oh yes, the space station ended up in a parallel universe - though the movie adds confusion by showing the Cloverfield Station drift off into space so when they 'lose' Earth, it's not clear if the planet is really gone or they just floated too far away from it. There's no super smart techsplaining in Cloverfield Paradox, and the fix is pretty simple: just fire the particle accelerator again and all will be well. It really was just that easy; the only complication was most of the astronauts deciding to kill each other.

Our sympathies are firmly with Gugu Mbatha-Raw from Black Mirror, the only actual character in the movie. She mourns for the family who died because of a tragic mistake she made, and she's tempted to stay in the parallel world because her kids are alive there, never mind how that could possibly work. Eventually, she makes the obvious but difficult decision to not go live in a Mirror Universe, which already has a perfectly fine version of her. Meanwhile, on Earth, her husband Roger Davies runs into the path of the giant Cloverfield monsters now rampaging all over the planet, and he has to get himself and a young girl he found to Ned Flanders' emergency bunker in a half-baked subplot.

The Cloverfield Paradox reveals that the monsters from the first movie and the ones from this movie we barely see are all on Earth because of the horrific goofup by the Cloverfield Station. So there are our answers. These astronauts are entirely to blame. While the parallel world Debicki is from is caught up in a world war, at least there seem to be no kaiju there so maybe Mbatha-Raw should have stuck around the Mirror Universe after all. And speaking of Mirror Universes, does this one need an Emperor? Because I know of one who's out of work and looking for a new gig.

#TheCloverfieldParadox had the same final shot as Batman Returns. Movie should have ended with the line: "Merry Christmas, Schmidt. Good will towards men. And monsters."
— John Orquiola (@BackoftheHead) February 5, 2018