HARRY POTTER AND THE GOBLET OF FIRE

Some scenes in Goblet of Fire fell flat or ended poorly. Some transitions were awkward and the entire movie did not quite flow together as Prisoner of Azkaban did.
However, there’s still so much good stuff in this movie. If it’s a notch below Azkaban, that still makes Goblet the second best so far, a remarkable achievement for the fourth film of a franchise.
Mad-Eye Moody was a bit of a disappointment. I envisioned the character in the book as more frightening and dangerous, not nearly as comical as he was portrayed in the film. Some of that was the makeup and his googly eye getting laughs that may have been intended but weren’t beneficial. His drinking polyjuice potion from his flask was a runner that made him seem like a goofy drunk, but when if you think about it, a teacher constantly drinking on the job should be seen as dangerous.
Needs more Severus Snape. He had one of the best comedy scenes in slapping Harry and Ron’s heads in study hall, but it wasn’t nearly enough business for the most interesting of Harry’s teachers.
Ralph Fiennes played a good, scary Voldemort. He was still recognizable under the snake’s head makeup and was generally the villain we were expecting to meet after four movies. While Fiennes spoke all his dialogue in a sinister whisper with a snake’s lisp, I did think maybe digitally enhancing his voice somehow might have made him more menacing. He came dangerously close to a Darth Vader “Nooooooo!” when Harry escaped his clutches.
Whenever Cedric Diggory was on the screen, I kept hearing Dr. Zoidberg in my head: “Such a man he is!” Diggory’s father wailing in anguish over his son’s dead body was heartbreaking and haunting.
While the visual ending of the Bulgarian ship submerging in the black lake and the French carriage soaring in the air was beautiful, Goblet kind of limped to a finish. It certainly lacked the exhilaration of Azkaban’s ending, with Harry’s closing line “I solemnly swear I’m up to no good.” The final exchange between Ron, Hermione, and Harry about writing letters over the summer was clumsy, when the last lines should probably have been Hermione asking, “Everything’s going to change now isn’t it?” and Harry responding, “Yes.” I did like how Daniel Radcliffe said “Yes,” without an ounce of trepidation, understanding full well what lies ahead for him. This Harry is much more heroic than in the books.
Emma Watson feels differently, but I couldn’t be happier there are no house elves in the movie, sorry.
I can’t wait to see Delores Umbridge take over Hogwarts and Harry lead the D.A. against her. How long until the next movie? Too damn long.
Posted by Back of the Head at 4:19 PM 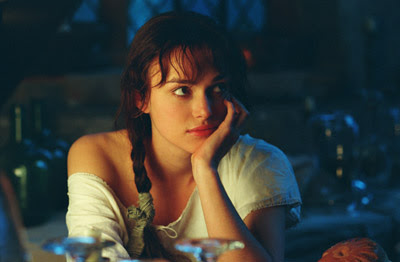 November 13, 2005
I’m gonna put this is the most macho, manly way possible: I thought Pride and Prejudice was really good. At about 135 minutes, the movie is a bit overlong and the pace flagged as the movie zeroed in on its second hour, but it’s pretty fucking romantic at the end. I see a lot of movies that want to be romantic or claim to be romantic but have no idea that they aren’t. Pride and Prejudice is romantic. There are three scenes that were total knockouts: Early on when Keira Knightley had her first dance with Darcy, when Darcy and Keira argued in the rain, and a fantastic scene where Keira was in Darcy’s house looking at his marble statues at there wasn’t a single piece of artwork in that room more beautiful than she is. Three great scenes, no bad scenes, and Keira Knightley = really good movie in my book.  I’ve never read Jane Austen and I never will, so it took me a little while to understand who everyone was, why Mrs. Bennett was so eager for her daughters to get married; how to women in that time period, marrying for money and security was more important than marrying for love and it was assumed love would follow when money and security were found. What won me over was Keira Knightley’s performance as Elizabeth Bennett. Everything about her was dreamy; her beauty, her intelligence, her wit. She’s just fucking gorgeous. With today’s abundance of hot actresses in movies and TV, it’s very easy to fall in lust with whoever the piece of ass of the moment is, but you don’t come across too many mergers of actor, character and performance that just captures your heart like Keira did mine.
Posted by Back of the Head at 12:17 PM