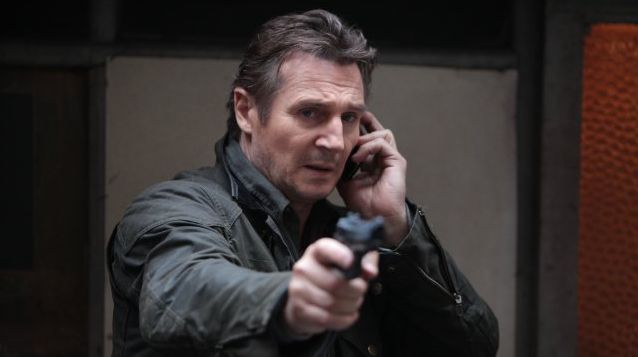 "Listen to me very carefully, Kim. Your mother and I are going to be Taken 2."

In Taken 1, 1 daughter was Taken 1. In Taken 2, 2 people, Liam Neeson and his ex-wife Famke Janssen are Taken 2. It's a twist, see. How is Liam Neeson going to save himself, his ex-wife and his daughter from being Taken again? Shoot all the Takers? Basically, yes. Once again, Albanian gangsters are the scourge of Liam Neeson and his family. The Albanians can't forgive how Neeson blazed a path of destruction across Paris in Taken and lessened the gangster population of Albania by a few dozen. Now the father of the Albanian who kidnapped Neeson's daughter, Maggie Grace, in the first place has vowed vendetta against Neeson. We all know how this will turn out for him and all the Albanians, but the Albanians learned no lessons from Taken 1.

Taken 2 is written by Luc Besson and Robert Mark Kamen. Kamen wrote the first two Karate Kid movies and Taken 2 starts off weirdly, kind of like Karate Kid 2, dutifully checking in on almost every surviving character from the first Taken, like Neeson's ex-CIA drinking buddies and the French inspector who Neeson assaulted at dinner. The French inspector being tortured and killed(?) by the Albanians is particularly pointless; Neeson never finds out about it, nor does the movie ever mention him again. Neeson is by far more interested in helping his teenage daughter Grace pass her driving test. Neeson was Father of the Year for murdering dozens of Albanian gangsters and bringing his baby girl home from sex slavery in Paris, but he loses points for not teaching her the proper way to parallel park ("Use your side mirrors"? No, the right way is to swing your right arm around the passenger seat and park looking through the rear windshield.)

After a lot of interminable set up, Neeson and family finally go to Istanbul so that the Taken 2ing and killing can commence. Trying to re-open amorous relations with Janssen, Neeson's "I'm about to be Taken Sense" goes off as the Albanians close in on him. Despite his best efforts, he and Janssen are Taken 2. Luckily, Grace stayed behind at the hotel and Luckily 2, Neeson somehow has a cell phone on him at all times and the Albanians allow him to make long, detailed phone calls to his daughter about what to do and how to help save them.

The most amusing parts of Taken 2 are Neeson instructing Grace on how to geo-position a map and what to do with all the grenades Neeson brought to Istanbul. Taken 2 innovates the "I don't know where I am until my daughter detonates grenades across the rooftops of Istanbul" method of GPS (always throw the grenades east), as Grace long-leggedly limbers across the skyline of Istanbul doing the crazy things her daddy tells her to do. Grace then gets behind the wheel of a cab and races with Neeson to the US Embassy, crashing through their guns and barriers, after evading all the cops in Istanbul. Add to the Taken Travelogue: the Istanbul polis are simply unprepared for the reckless driving of an American teenage female student driver.

After the cab containing Neeson and Grace comes to a screeching halt, all the interesting parts of Taken 2 also come to a screeching halt. There's still the matter of rescuing Janssen, but Neeson knows exactly where to go and exactly who to kill to get that last piece of business done. Finally, Neeson comes face to face, father to father, with the Albanian crimelord behind it all, Rade Serbedzija. The following exchange occurs as they attempt to justify why they are killing each other:

Serbedzija: "You killed my son!"
Neeson: "Your son kidnapped my daughter and sold her into sex slavery!"
Serbedzija: "I don't care what he did!"

Okay then. Seems like they could go in circles all day about this. Serbedzija had earlier threatened to carve up Janssen into little pieces and again promised to sell Grace back into sex slavery so she could be used up "by the lowest of men like a piece of meat." Poor Maggie Grace. The Albanians absolutely insist her destiny is going into sex slavery if they have anything to say about it. Neeson objects to this, of course. Despite the threat of more of Serbedzija's sons coming after Neeson's family in Taken 3 to put Grace back into the sex slavery they've got their Albanian hearts set on, Neeson sends Serbedjiza to Albanian Hell.

Neeson does admit that he's tired, tired of killing Albanian gangsters. Yeah, we all are. Of watching Neeson kill Albanian gangsters, I mean. The Albanians have proven to be hapless villains, stupid and easy for Neeson to rip through with a vengeance. What was shameless fun the first time around feels rote, boring and grating in Taken 2. Taken 3 should find Liam Neeson considerably less motivated to murder even more Albanians, especially if they decide to Taken 3 his daughter's new boyfriend.
Posted by Back of the Head at 3:56 PM