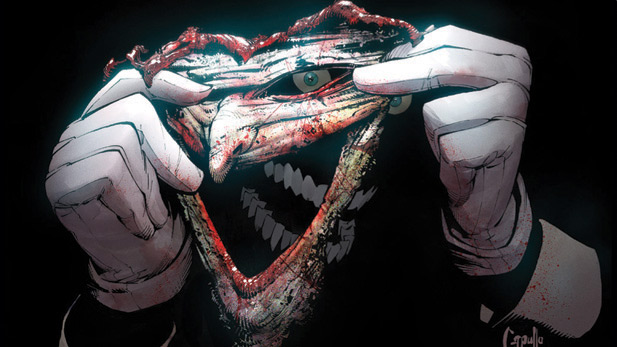 "Death of the Family"

Over a year ago, both in DC Comics continuity time and in the real world, The Joker allowed his face to be cut off. Then he vanished for the entire year. Batman had many, many other problems to deal with and no one in Gotham City nor the DC Universe, save perhaps Harley Quinn, was particularly upset to have an entire year without The Joker menacing their lives. Of course, it was only a matter of time until The Joker returned.

Batman #13, a bone-chilling blockbuster written by superstar writer Scott Snyder and superstar artist Greg Capullo, kicks off the massive "Death of the Family" storyline throughout the Batman line of titles. The Joker has come back to make a deliberate statement about the Batman and his allies, Robin, Nightwing, Batgirl, the Red Hood, the ever-vigilant, ever-suffering Commissioner James Gordon, and - shockingly - Alfred Pennyworth, loyal butler to billionaire Bruce Wayne. Oh no, Alfred is not safe either. The Joker has done his homework in his time away, it seems.

Setting up the crossover aspect of the story, members of the "Batman Family", the current Robin Damian Wayne, Bruce's ultraviolent ten year old son, Nightwing, Red Robin, and Batgirl, chime in when they hear The Joker's back in town. Batgirl, whom The Joker shot and paralyzed, is naturally alarmed for herself and her father the Commissioner. I liked Damian's flippant attitude towards The Joker the best. As per usual, the Batman decides The Joker is his problem alone and eschews the aid of his "family". But we know from the nature of this story, The Joker has other ideas.

The best stuff Snyder and Capullo deliver in Batman #13 are the pure horror and the callbacks. First, the horror: The Joker chooses one of his favorite targets for torment, Jim Gordon, as his way of announcing his return. He knocks out power in Gotham Police Headquarters and methodically snaps the necks of the cops present in the dark, taunting Gordon all the while with his maniacal jokes and laughter. Batman arrives too late and playing catch up (a common theme in this issue). Later, The Joker slaughters even more cops, using a new version of his Joker Toxin (I wish DC Comics would just call it Smylex) that twists their mouths into frowns instead of smiles. The Joker isn't playing quite the same old game.

Snyder's worship of Batman's legacy is stunning. He homages the very first appearance of The Joker in Batman #1 (1940) by having Joker kidnap the son of the very first person Joker ever murdered in a Batman comic, cited by Batman in The New 52 continuity as Joker's first-ever kill. (With a nod that Joker threatened his life on television instead of the radio as in 1940). Joker's haunting of Gotham Police headquarters and Capullo's visual presentation of Joker harken to Heath Ledger in The Dark Knight. The Joker making his television announcement brings back fond memories of Jack Nicholson's televised threats in Tim Burton's first Batman (1989). When Batman thinks he confronts The Joker at Ace Chemical Plant, where The Joker fell into the vat of chemicals that turned him white and gave him his perpetual smile, Batman meets The Red Hood, Joker's original alias, who turns out to be Harley Quinn. Harley springs The Joker's trap, as The Joker brings his vengeance straight to Batman's - Bruce Wayne's - home.

The Joker's current appearance, with his face pinned and belted onto his head, is probably the most shocking and grotesque he's ever been. Nor is Harley Quinn, his devoted lover, spared the horrors of The Joker's new attitude, in a grim and saddening back up story by Snyder, co-writer James Tynion IV and artist Jock. The Joker's not back to make friends, or even keep the old friends he once had.

In the end, this is all about the Batman. In his taunts, The Joker calls Batman "fat" and "slow" and "soft", mocking him for his year-long war with The Court of Owls that cost Batman nearly everything, including his sanity. And maybe The Joker has a point. The Joker claims he has returned to strip Batman back to basics, make him what he used to be. If anyone can do it, it's Mr. J.
Posted by Back of the Head at 2:23 PM