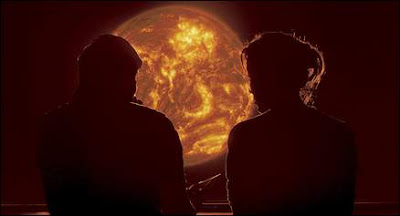 You're Not The Only One Staring At The Sun, Afraid Of What You'll Find


I like starships and phasers and Klingons and Jedi and giant transforming robots more than the next guy, but sometimes I crave a story set in space where none of the humans wear colored pajamas and swing lightsabers to fight aliens with bumpy foreheads. Every now and then, I get my wish.

With Sunshine, Danny Boyle's first foray into science fiction, he broke the pattern of my liking every other one of his pictures. His previous film, Millions, is one of my favorites, and now with Sunshine, he's two in a row with me, delivering one of the better sci-fi films I've seen in recent years.

Sunshine is not a space opera like 2001 or a metaphysical think piece like Solaris, but contains elements of both as well as Alien and 28 Days Later. It's a great story written by Alex Garland, with interesting characters, an intriguing premise, terrific music by John Murphy and Underworld, ideas both big and small, and a bravura visual style. Sunshine overreaches a bit in its third act and adds an element of horror that seems to be at odds with what had come before, but the foundation for it was sufficiently laid out and it's used as a vehicle to portray the light and the darkness of the spiritual element of the story.

Fifty years from now, the sun is dying. Earth is caught in a solar winter. The human race is on the verge of extinction. An international assemblage of eight scientists on board the Icarus II spend years in space hoping to deliver a payload that will detonate into the sun and cause a new star to be born inside the dying one. Imagine spending years in space with the same seven people, hoping against expectations that your mission can possibly succeed when there are no guarantees it would. Meanwhile, the specter of the previous Icarus mission, which failed and was never heard from again, hangs over our astronauts.

Sunshine is not a live action cartoon like Armageddon. Boyle and Garland have far more realistic ideas about how such a desperate mission of traveling millions of miles to re-ignite the sun would turn out. Sunshine presents an overwhelming problem to the survival of the human race and makes it damned clear that Bruce Willis isn't here to make you feel good about it.  I almost wished one of the characters was shown watching a DVD or whatever they'll use in 50 years of Armageddon, so they'd feel even worse about how screwed they are. The harsh reality of Sunshine was the polar opposite of funny Owen Wilson and Steve Buschemi in cracking wise in space and Ben Affleck playing with animal crackers on Liv Tyler's stomach while Aerosmith blasts the soundtrack.

The crew of Icarus II, played by an excellent cast lead by Cillian Murphy, Rose Byrne, Chris Evans, Cliff Curtis and Michelle Yeoh, are not necessarily the best of the best with the Right Stuff. They're all intelligent but flawed people who are presented with a series of obstacles where they are forced to make difficult choices that inevitably result in death and tragedy. Their performances are all layered and effective, but the standout here is Chris Evans as Mace, the ship's hotheaded engineer. As the Human Torch, Evans was one of the few bright spots of the Fantastic Four movies but in Sunshine, he shows he's a better actor than he's been allowed to be in his rotten comic book movie franchise. Evans exhibits genuine leading man qualities. If they'd just listened to Chris Evans, things might have gone better for the Icarus II. But they didn't.

In the course of the choices the Icarus II 's crew makes and the events that happen to them, they gradually discover an unforeseen element that is sabotaging their mission and trying to kill them, which directly relates to what happened to the crew on board the Icarus I . When the villain is revealed, the horror element introduced is jarring and seems out of place, but I understood why this choice was made and I liked it the more I contemplated it.

The spiritual element and questions raised are intriguing. The sun dying becomes an allegory for whether God has decided that Man must die. By using our science and attempting to re-ignite it, can Man defy God? In the face of the sun's overwhelming heat and light, can Man see God's face and touch Him?

Sunshine is exactly the kind of "hard" science fiction film I like. It's smart and stylish, it makes you think and makes you feel, and it's bleak . Sunshine holds you at bay, then creeps under your skin and fills you with awe and dread. It's flawed and sometimes difficult but Sunshine's the hot shit.
Posted by Back of the Head at 5:03 PM