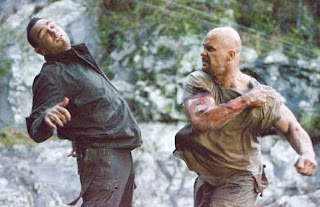 
Jim Ross claims he saw The Condemned three times in the theatre. If that's true then by God, that ol' Okie must be in love with his good friend Stone Cold Steve Austin. It's a shame then that even Good Ol' J.R.'s repeat business didn't stop The Condemned from becoming the lowest grossing WWE Film at the box office. The Condemned's failure sank the fledgling WWE film division and relegated any future WWE productions to go straight to DVD. Thing is, The Condemned is the best of the WWE Films. That isn't saying much; See No Evil and The Marine are pretty shitty, but The Condemned is surprisingly watchable and enjoyable as a pure action B movie.
By now, after seemingly thousands of commercials, every WWE fan knows the basic plot of The Condemned: On a remote island, ten death row inmates, eight men and two women, all killers, are forced to fight to the death. The sole survivor wins his freedom. The entire sordid affair is broadcast as "www.the_condemned.com" live over the Internet for profit by Breck, a slimey producer out to exploit the "reality" of people killing each other for a fortune in pay per view Internet dollars. On the surface Breck is a stand in for Vince McMahon, but he didn't father a bastard leprechaun, and he's as much a commentary on someone like Girls Gone Wild maven Joe Francis and sleazy network producers as he is a riff on the beloved Chairman of WWE.
The first thing I found interesting was that the burden of carrying the movie doesn't fall on the shoulders of Stone Cold Steve Austin, which is the fatal mistake The Marine did with John Cena and See No Evil did with Kane. Austin ostensibly plays the lead role but the movie takes a minimalist approach to how much Austin is on the screen. He pretty much appears only when he's needed and spends a considerable amount of time off screen. Austin wisely doesn't try to do or say too much and doesn't veer very far at all from his bad ass wrestling persona. Even when he manages to call his girlfriend back in the States to tell her he's still alive, he keeps the mushy stuff to a bare minimum.
The filmmakers make every moment Austin appears on the screen count. Stone Cold's performance isn't stunning by any means, but as the default hero of the story he's pretty solid. (Still, I think I'd have preferred seeing the heel Stone Cold of 2001 who liked singalongs, needed hugs from Vince McMahon, and was terrified of eating his wife's cookies. Maybe if there's a sequel...) The main thrust of the action on the island is handled by Vinne Jones, who plays a damn good heel, especially when he's not wearing a fake muscle suit, a toilet bowl on his head, and screaming, "I'm the Juggernaut, bitch!"
Meanwhile, Breck is the center of all of the drama regarding the ethics and morality of broadcasting the deaths and even rapes happening on the island. A couple of Breck's crew members, including his hot girlfriend, actually have a conscience and attempt to put a stop to what they're doing, while the rest of his crew are as amoral as their employer. The movie even point blank accuses the audience (our culture at large) of being the problem for watching the_condemned.com and considering watching people die entertainment. The moralizing is heavy handed and as blunt as a steel chairshot to the head. But fuck, I was pretty surprised it was there at all. The movie's ethical position plays full force when Stone Cold and Vinnie Jones force the tables to be turned on Breck and his crew and they're forced to pay the piper for the roles they played on the show.
The action isn't filmed with any great panache but the filmmakers wisely kept the fighting realistic. It's a pretty fucking violent movie with people getting shot, stabbed, beaten, run through with arrows, and exploding. Probably half of the "condemned" die by explosion. If you want to see people get blown up real good, this is the DVD for you. When one of the "condemned" is raped by Jones and his little Japanese sidekick, the movie wisely doesn't show it but makes its occurence the lynchpin for moral outrage. The breakdowns of when the condemned attack each other, what they're after, and when and why some of them forge alliances were well thought out. Again, there's a level of thought in design and competency of execution on display in The Condemned that was unexpected and commendable. Especially from a movie bearing the credit "Executive Producer Vince McMahon."
While I don't need to see The Condemned ever again, I had fun and I'm not sorry I saw it, which I can't say for Cena or Kane's movies. And that's a big get. Although whoever picked the song that closes the movie needs to take a Stone Cold Stunner and a beer bath. When I think of the music to represent the Texas Rattlesnake, the Bionic Redneck, the Toughest SOB in WWE, I don't think Nickelback.
Posted by Back of the Head at 7:42 PM