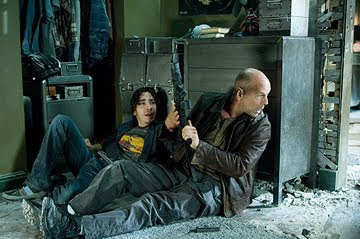 July 1, 2007
I'm an old school Die Hard fanatic. One of my fondest moviegoing memories is watching the original in the theater with my dad when I was 13. To me, the first Die Hard, along with Lethal Weapon 1 and 2 and Robocop, set the standard for action movies during the 80's that only Terminator 2 met and exceeded in 1991. Nothing else calling itself an action movie since has been in their league. Certainly not Live Free or Die Hard. The first 30 minutes or so, it didn't feel like a Die Hard movie at all. Remove the physical presence of Bruce Willis and I might as well have been watching Enemy of the State or some other fast edit, jump cut cyber-thriller. It really didn't help matters that the choice of desaturating the color so that the movie looked like Underworld or Minority Report is all wrong for a Die Hard movie. Len Wiseman can't direct for shit, the movie was poorly edited, and either Wiseman doesn't know how or just didn't bother to spend the time to build the appropriate dramatic tension during the action scenes so the audience gets drawn into it as opposed to shit just blowing up one after the other like they're trying to win a race.
It wasn't until the action sequence where John McClane launched the car into the helicopter that it started to feel like a Die Hard movie. When McClane came out of that action sequence all bloodied up and hurt, I thought to myself, "There he is! There's John McClane. Finally, this is Die Hard." And then I wondered how he'd survive the next two hours when he was already so injured. The answer: this newer, older, bald John McClane (why couldn't he have worn a wig like in The Sixth Sense?) is a Terminator crossed with Wolverine. He heals superfast and never stops coming at you, even telling Timothy Olyphant several times he was coming for him. Then Terminator McClane fights Maggie Q, his own Terminatrix, who can survive being hit head on by an SUV at high speed through several walls and shake it off. Then McClane fights a harrier jet with a semi truck, survives a fall and explosion that should have not only killed him but smashed him into pieces and burned those pieces into char, but he gets right up immediately, perfectly fine. In fact, Live Free or Die Hard reminded me a whole lot of Terminator 3 -- it felt like fan fiction cribbing on the name and reputation of the original, doing just enough to barely scrape by with enough credibility to call itself a part of the franchise.

The story was equal parts preposterous but still kind of cool and fun, and the movie did get better as it went along. Bruce Willis I thought was inconsistent; his physical presence aside, sometimes he was like a stern faced robot but occasionally, flashes of the old John McClane we know and love would come through, just not enough or often enough. Justin Long started off annoying me something fierce and had a really bad "comedy" scene where he tricks OnStar into starting the car they had stolen, but he also became more sympathetic and likeable as the movie continued. He actually had the best character arc in the movie and was the only one who understood what the cyberterrorists were doing and genuinely felt bad about it.. Timothy Olyphant couldn't hold a candle to Alan Rickman or Jeremy Irons, but he also got more interesting as McLane fouled up his plans. Mary Elizabeth Winstead is an actress I find very attractive and appealing. She didn't have a whole lot to do as Lucy McClane except require rescuing but her character arc and performance did just enough to evoke that she is indeed the daughter of John McClane.

Overall, I liked Live Free or Die Hard well enough. I was expecting a total piece of crap initially. It was entertaining enough and I enjoyed it, but it falls far short of the bar set by the original Die Hard.

I spent Wednesday and Friday of this past week working freelance for a market research company hired by FOX to do instant audience polls for Live Free or Die Hard. We gave out hundreds of surveys and I was pretty surprised at how positive the feedback was, overwhemingly "excellent" or "very good.". But that was nothing compared to what really amused me: By far, the strongest positive reaction to the movie came from women between the ages of 45-65. Even more than teen boys or adult males. In fact, I lost count of the number of middle aged women who told me personally that they were there to see Bruce because they "just love Bruce!" When they came out of the theatre, the most common thing those same women said to me was "It was excellent! I love Bruce!" So there you go, middle aged women love the Bruce. It makes perfect sense since those are the women who've liked him since Moonlighting. Obviously, Bruce won't be drawing the teen girls to the theatres. But boy, do their moms love him.
Posted by Back of the Head at 11:09 AM