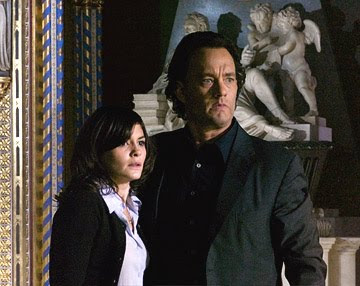 So Dark The Con of Man

Ron Howard's been kicked around a lot this week. The critics and media, momentarily tired of Tom Cruise bashing, have unleashed their claws at Howard's The Da Vinci Code. I'd say the malice towards the movie, which is by no means a masterpiece, is largely undeserved. Listen, the movie ain't great, but it was never designed to be either. Like the novel, The Da Vinci Code feature film is disposable entertainment. The movie's crime is supposedly being slavish to the novel, but having read the book and now seen the movie, I can't savvy any way to interpret the material differently and still maintain the preposterous story that sold 40 million books worldwide and enraged the Catholic Church.

The movie's problems lie directly with the source material. Dan Brown is a crap writer. His storytelling is boneheaded and repetitive. His characters are stock. His ability to concoct a thriller plot is TV movie-of-the-week caliber at best. His idea of a cliffhanger is to end a chapter with a character in mid-lecture and then pick the lecture up in the very next chapter. And yet, his novel manages to be entertaining and the subject matter at the heart of The Da Vinci Code is a fascinating one to imagine.

Creatively, Ron Howard and his filmmaking team were in an unenviable no-win situation. They had to dramatize a book that basically was about people lecturing each other for dozens of pages, and then dashing off to another location for even more lectures. At the end of the day, given what he had to work with, Howard did a damn fine job. The Da Vinci Code carries most of the flaws of the novel, but then at its best, the movie improves upon and transcends its source material.

Instead of opening with Robert Langdon being woken in his hotel room, Howard condenses and visually illustrates Langdon's career as a lecturing Harvard professor of symbology by introducing him in mid-lecture, deftly easing the audience into how symbols have been co-opted and corrupted throughout time. This was a very engaging and effective departure from the novel and one of several innovative ways the film managed to convey the material of the endless lectures found in the book.

Tom Hanks, Audrey Tautou, and Sir Ian McKellan rise far above the material with their performances. The critics complained Hanks was an uncharismatic bore. Bullshit. Hanks did exactly what he was supposed to do: he took Robert Langdon, a character that was nothing more than a cardboard lecture machine, and humanized him. It didn't happen right away; the first hour of the movie forces the characters to hurtle along the checklist of events set by the novel, allowing the actors precious little time to work their magic.

When Langdon and Sophie Neveu arrive at Sir Leigh Teabing's estate, the actors are able to breathe a bit more life into their roles. McKellan's entrance delivers an instant jolt of energy and humor that Hanks and Tautou were able to play off of. McKellan was the most entertaining actor in the entire movie. It was evident he was having a jolly old time, and the movie practically reset its tone and became much more interesting once Teabing came into the picture.

A crucial masterstroke here was to alter Langdon's character to be skeptical of Teabing's conspiracy theory about the Holy Grail and the alternate history of Jesus Christ and Mary Magdelene. In the novel, Teabing and Langdon spend hours tag teaming Sophie with their lecture. Just pages and pages of the two of them blah blah blahing; about interesting stuff, sure, but dramatically, it's impossible to play two men taking turns talking at a woman in a living room. With Hanks countering Teabing's rants with skepticism and pragmatism, it creates a balance and puts the audience on Sophie's side, sharing her disbelief and confusion as to who is right. Plus you could see Hanks and McKellan were having a ball.

Audrey Tautou is really fucking beautiful, but beyond that she has one of the best moments in the movie on Teabing's plane when she slaps Silas the albino monk twice for killing her grandfather. When Silas says that every breath she takes is a sin, Sophie fires back that his God doesn't condone murder, he punishes it. This was an awesome moment, especially if you already know Sophie is the descendant of Jesus Christ's bloodline. Think about it, this is the Sion of Jesus who slapped this monk and told him he was going to be punished. I don't recall if this moment is in the book, but regardless it's fantastic and works even better when one is aware of the vital information about Sophie.

At the end, when Langdon is forced to decipher the cryptex while Sophie Neveu is held at gunpoint by Sir Leigh Teabing, Howard makes brilliant use of Langdon's pre-established photographic memory and creates a CGI representation of Langdon's memory of Sir Isaac Newton's tomb. I don't recall if Langdon had a photographic memory in the novel, but this was an ingenius way for the audience to literally see Langdon break the most important code in the movie.

Unfortunately, the novel has three endings: the reveal and capture of Teabing, Langdon and Sophie at the church in Roslin, and Langdon back in Paris discovering the Grail's final resting place. The best of these, and the shining moment for Hanks and Tautou, was at Roslin after Sophie has discovered the truth about her royal bloodline. Langdon and Sophie's talk about faith and what Sophie should do with the knowledge of her heritage was just terrific. And it was capped off with a nice gag about Sophie testing to see if she can walk on water. Did she cure Langdon's claustrophobia with her hands? Can she turn water into wine? Does Sophie have Jesus' superpowers? It was all handled sweetly and beautifully, with deft humor and grace. To me, this was the scene that made the movie and was superior to anything found in the novel.

The story plays like an art history episode of 24 set in Europe. Langdon and Sophie are on the move for more than full day and night straight, traveling across France and Great Britain. They stop to eat once only briefly, they never have a chance to sleep, shower or change clothes, and are constantly running from the police and from a gay cripple and a monk trying to kill them. Critics accused Hanks of being lethargic in his performance, but his character was tired.. When he wasn't lecturing or running for his life, he was busy trying to decode puzzles and anagrams.

Certain ideas and scenarios from the novel were condensed or excised altogether, all of it a wise move. Frankly, we didn't need to see the sordid details of Sophie's grandfather having hot and heavy secret society sex in a flashback. And thanks, Ron, for not showing the dead grandfather's genitalia. Another director might have, but not you, Ron. Good man.

Is the movie flawed? Quite so. Is the source material flawed? You'd better believe it. Did Ron Howard and company do a great job? I'd say they sure did. At the end of the day, The Da Vinci Code is an occasionally tedious, occasionally thrilling, but largely successful piece of pop filmmaking entertainment. A worthy cinematic adaptation of a truly wretched, if popular, book. If Ron Howard had chosen to act as the narrator, and if a one-armed man appeared at the end to say, “And that's why you don't go looking for the Holy Grail!” it would be a four-star masterpiece, but the way it is, it's a solid three.
Posted by Back of the Head at 11:13 PM