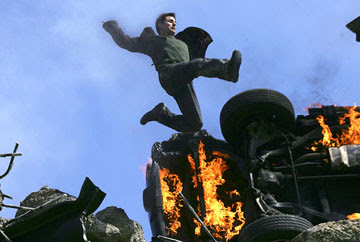 
The Tom Cruise Stunt Show Spectacular is a tough gig for the action hero always on the go, but it does come with built-in breaks:  See Tom rappel from a building in Berlin, blow up a helicopter, take a five minute break to go to a funeral, teach a seminar on the finer points of rubber mask making, dress up as a priest and break into the Vatican, get married in a hospital, bang his new bride in a supply closet, fight off helicopters and fighter jets and get blown into a car on the Chesapeake Bay Bridge, pause for a moment of reflection and male bondage, escape from IMF headquarters after being double crossed, put on a funny hat and wig, get double crossed and captured again, run the Shanghai Marathon, fight off a migrane, kill the villain, and creep out half the guests at his engagement party.  Maybe not in that order; Tom tends to make things up on the fly.

Third time around for watching the Tom Cruise Stunt Show Spectacular, otherwise known as "Mission: Impossible III" and I'm officially tired of it.  I'm tired of rappelling, of rubber masks “fooling” everyone, of switcheroos and double crosses, of Marcellus Wallace as the funny black sidekick.  I'm tired of “impossible” missions.  Most of all, I'm tired of Ethan Hunt, whoever he is.

Seriously, who is this guy?  Three movies over ten years and all we know about Ethan Hunt is he likes to jump off of buildings while wearing tight black T-shirts to show off his biceps and pecs. I thought this time around the point was to find out what makes him tick.  We find out he has a pretty young wife, Michelle Monaghan, at home in Virginia who he lies to all the time.  They don't talk about anything.  He has no conversation and neither does she.  His response to every person, problem, or situation is either a steel-jawed glare of death or a big goofy grin of death.

Any time he actually has to talk to or deal with another human being, you can see all Ethan Hunt is thinking about is how he can end the conversation as quickly as possible so he can jump off the nearest building and shoot someone. And then he ends the conversation as quickly as possible, jumps off the nearest building and shoots someone. He's an adrenaline-junkie/cipher.  He's a lousy secret agent.  He's not a person, he's nobody.  Worst of all, he makes other people who could be interesting into nobodies.

On this impossible mission, Ethan Hunt has a team of people helping him out, including Jonathan Rhys-Myers, Maggie Q, Simon Pegg  and Keri Russell.  They find the long shadow Ethan casts and fight amongst each other to stand in it.  Ving Rhames has had his spot in Hunt's shadow staked out for three movies, so there's not that much room left for the new kids.  Keri Russell is the only one killed off, but she makes sure to thank Ethan before she goes. I miss her right away.

These characters might be interesting; they're trying to be.  They have stuff they want to say.  Ethan doesn't want to hear it.  For instance, in the Shanghai leg of the Stunt Show, Maggie Q and Rhys-Myers are sitting around in their van waiting for Ethan to jump out of a building.  (Ethan Hunt is the only guy in the world who climbs to the roof of a building so that he can jump off it into another building.  Then he exits the second building by jumping out of it.  Even Spider-Man thinks it's excessive.)  Maggie Q starts praying in her native language, something Asian, probably.  Rhys-Myers finds it interesting and so do I.  He asks what she's praying.  She agrees to teach him.  Before anything else can happen --

Listen, IMF noobs, Ethan Hunt isn't a real character, so don't you try to be either.  You're better off following Ving Rhames' route and wait for the eleven seconds in between Ethan's killing people or rappelling to crack some jokes.

The villains aren't much better off.  Phillip Seymour Hoffman isn't a real character, either.  Even though he's barely in the movie, Hoffman looks tired all the time, like he just spent fourteen hour days shooting Capote and now he's gotta go do this shit where half his dialogue is asking about a rabbit's foot.  This villainous arms dealer is so bad ass, he gets captured like a punk in the middle of one of those black-tie cocktail galas the Vatican is world-famous for throwing.

Right after he gets captured, Hoffman goes into his “I'm gonna kill you and the person you love most, your mirror” speech.  Then he gives another later on, same speech, but this time, he means it.  Then he is dead.  Rachel McAdams in Mean Girls survived being hit by a bus but not evil Capote. Doesn't matter anyway, he wasn't the real villain.  He's not a Golden God.  Ethan Hunt might have figured it out sooner if he weren't so busy shopping for nylon-fiber lines that can hold his weight while he plummets.

All of the rappelling and shooting and explosions were executed well; there was just so much of it and it was numbing and un-memorable.  The women in the movie were largely wasted.  Ethan's wife asked a lot of questions at the end when he freed her.  They were good, logical questions.  “Why are we in Shanghai ?” “Why did Capote try to kill you?”  The hundred million dollar question: “Who the hell are you?” she chose to omit.  Maybe she married the right guy after all.
Posted by Back of the Head at 11:10 PM