I can feel it comin' in the air tonight 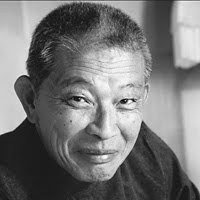 Mako died on Saturday, July 21, 2006 after a long battle with cancer.  He was 73.
In my head there is a list of character actors I've always wanted to work with.  Mako was always at the top of the list.  Strangely, with a couple of exceptions, I've almost never seen Mako in a good movie.  Before I knew who he was, I remembered him as the Wizard in Conan the Barbarian and Conan the Destroyer.  The first time he truly came to my attention as Mako was in 1993, in Sidekicks, when he played Mr. Lee, the Mr. Miyagi-like karate teacher to the late Jonathan Brandis.   As the head of the Nakamoto corporation, he had very little to do in the movie adaptation of Michael Crichton's Rising Sun besides look stoic and play golf with Sean Connery.  In 1994, Mako played the sorcerer Nakano, chewing the scenery and teaching Connor MacLeod “the power of illusion” in Highlander: The Final Dimension.  Although he was in Bulletproof Monk, I don't remember him in it or anything else about that movie.  I don't recall seeing Mako again until he appeared as Admiral Yamamoto in that piece of garbage Pearl Harbor.  He got to utter the key line: “I fear we have awakened a sleeping giant and filled him with a terrible resolve.”  The exception to the Mako-in-bad-movies rule was his brief cameo appearance in Memoirs of a Geisha.  Mako would have been the voice of Splinter in the animated  Teenage Mutant Ninja Turtles movie next year. Good movie or bad, Mako always stood out to me; he was always fascinating to watch, a twinkle in his eye, his performances filled with nuance. It was always a pleasant surprise when I'd watch a movie and Mako appeared (he is rarely billed in promotional materials.) A glance at Mako's IMDB page shows a career spanning over 40 years in film, television and animation.  You've seen Mako's work too and probably never realized it.
He was a pioneer for Asian-American actors in the United States. Mako has a star on the Hollywood Walk of Fame and he was nominated for an Academy Award for Best Supporting Actor for The Sand Pebbles in 1966.
It's as Mr. Lee in Sidekicks that'll always remember him best.  Sidekicks is one of my favorite bad movies and I loved Mako as the cantankerous but wise and caring karate teacher who called Jonathan Brandis "Mr. Dumpling." I still watch Sidekicks like a mental patient if I see it on cable just to watch Mako.   Mako was usually called upon to play wise but mischievous characters, something he did exceptionally well. He had tremendous natural comic timing and he had a gift for being able to convey that he knew a lot more than he was letting on.  One of the reasons I love Mako was that he reminds me of an older, Japanese version of my dad.  Mako always seemed like a nice man and a great guy.
I wish I got to work with him or at the very least meet him and tell him how much of a fan of his I am. I'm probably always going to regret that now.
I'll miss you, Mako.
Posted by Back of the Head at 8:56 PM

Email ThisBlogThis!Share to TwitterShare to FacebookShare to Pinterest
Labels: 2006, Essays 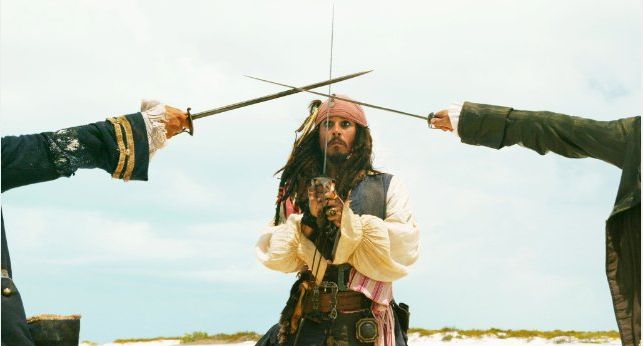 Pirates of the Caribbean: Dead Man's Chest is a Wile E. Coyote and Roadrunner cartoon come to life. It's over the top, mateys. Over the top. I don't like seeing quite so many loud clanging things in my movies, not even my summer blockbusters. Pirates of the Caribbean: The Curse of the Black Pearl was a model of restraint compared to this sequel. It was also a better movie by far.

Coming to kill Captain Jack Sparrow, Will Turner and Elizabeth Swann were Davey Jones, the East India Trading Company, island cannibals, every kind of CGI-fish monster the sea could spit out, and even familiar faces like ex-Commodore Norrington. Yet never once are Jack, Will, and Elizabeth in any real danger. Never once are they in genuine jeopardy. There is no chance whatsoever that any of the three main characters will be harmed in any lasting way. No matter what kind of absurdity the movie throws at them, they manage to scream, run in just the right place in just the right way, fight anything just well enough, and they never get tired or hurt, hungry or thirsty, or bored with all the screaming, running, and fighting they have to do.
Actually, that's the movie's strength: It's not boring and it's hellbent on entertaining you. It's weakness is that it's hellbent on entertaining you Saturday morning cartoon-style. Not one but two very long rolling ball gags: the first act with Will Turner and the crew of the Black Pearl caught in a bone version of those rolling spheres on American Gladiators , and then another one with Turner, Sparrow and Norrington having a triple threat swordfight on a wheel rolling along an island. Dead Man's Chest throws everything it can think of at you to show you a good time and thinks you'll have an even better time of it throws it at you again. Many critics have complained the storyline is incomprehensible but the multitudes of children in the audience understood what was happening just fine because they're used to cartoons.
For the pubes and post-puberty crowd, there was some enjoyable stuff. Johnny Depp is still pretty entertaining as Captain Jack Sparrow. His performance is no longer surprising and unique, but he was the only character who was in on the joke and conveyed to the audience that he understood everything that was happening was ridiculous. Sparrow is half-mad, but he's really more half-sane in a madman's movie.
Sparrow's character thankfully wasn't compromised: he's still a rogue out for his own ends, coming up with strategies on the fly and using everyone around him constantly as means to an end while fighting his heroic inclinations every step of the way. I liked the twist in the big finish where his one big act of conscience: returning to save the Black Pearl from the Kraken, was met with his being betrayed and essentially doomed to death by Elizabeth Swann.
The cliffhanger was Star Trek II: The Wrath of Khan all over again, which is now officially both the greatest and most borrowed-from second-act finish in movies today. (only McCoy didn't turn on Spock and chain him to the exploding warp core.) Jack Sparrow “dies” to save his crewmates, who vow to bring him back in the third movie. We just saw this aped three years ago in X2: X-Men United and here it is again. Kill a main character and promise to bring him or her back in the third movie. Works every time. Those Star Trek writers were geniuses. I hope they get a check every time someone steals their gimmick.
Oddly, while I didn't really enjoy myself while I was watching Pirates of the Caribbean: Dead Man's Chest, looking back at it, I'm dwelling a lot more on the things I did like:
Keira Knightley got to play like a boy this time and she can run, scream, and swordfight CGI monster men with the best of them. I can't imagine a circumstance where I'd ever get tired of looking at her; I found myself fitful and impatient whenever she wasn't on screen. The third act of the movie when she finally shared scenes with both Depp and Orlando Bloom was the part I liked best. I liked the reveal that Sparrow's broken compass points the user towards what he or she really wants and the running gag of Elizabeth being frustrated that it kept pointing her towards Sparrow. I suppose she'll figure out in the next one that it isn't telling her she wants Jack but that she really wants a pirate and for Will to become a real pirate. And that she wants to be a pirate as well. I also liked Elizabeth using her dress to “haunt” the merchant ship she was stowed away on. I loved the shot where the dress sinks down to the depths of the sea and the implication that Elizabeth and Will's intended life together as regular people is lost forever.
Bill Nighy is such a fantastic actor that it's a shame he was buried under the CGI claws and tentacles as Davey Jones. The animators did manage to convey some of Nighy's trademark facial expressions: his pout and his raised eyebrow. Davey Jones didn't quite have the menace he should have had, but he was much more effective and relatable than the CGI fish monsters who crewed the Flying Dutchman. Davey Jones was a neat idea in conception but lacked the menace and pathos of Geoffrey Rush's villainous Captain Barbossa, and that's the damn CGI's fault. (Rush's cameo at the very end as the Captain on the expedition to World's End was a great fucking twist that sold me on the third Pirates movie instantly.)
I liked the Kraken and I liked the plan Jack, Will, and Elizabeth executed to blow it up with the gunpowder and rum. I also liked the expanded roles of the two pirates, the fat one and the wooden-eyed one, and their philosophical conversations. They're a non-gay pirate version of R2D2 and C-3PO.
It's a strange dichotomy: ultimately, I think Dead Man's Chest is a bad movie but a good cartoon. Regardless, I still want more Pirates and I'll be there with bells on for Pirates of the Caribbean: At World's End .
Posted by Back of the Head at 6:59 PM