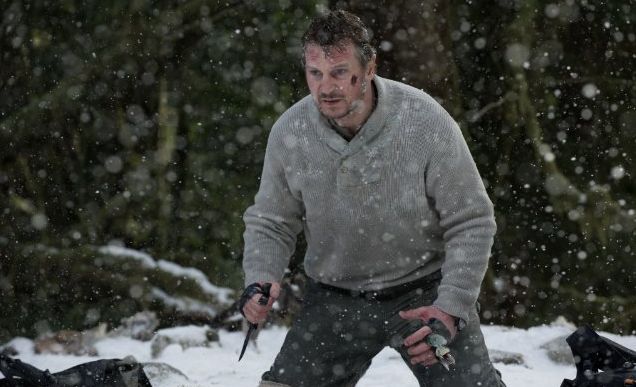 ** SPOILERS **
"Once more into the frey..."
International terrorists have proven no match for Liam Neeson in Taken, nor have shadowy assassins in Unknown. In The Grey, Neeson battles Mother Nature herself, and her agents, killer Alaskan wolves. A somber, suicidal paid assassin for an Alaskan oil drilling company, Neeson's primary function in life is to shoot  the wolves that threaten their digs while silently yearning in heartbreak for his lost wife. When a horrific plane crash strands him and several other oil riggers in the frozen northern Alaskan wilderness, Neeson's (limited) survival knowledge is the only thing keeping the survivors alive as wolves pick them off one by one. The plane crash sequence in The Grey is as white-knuckle inducing as it gets, though the odds of so many men walking away from such a crash relatively intact is the first of many pulls against the fierce verisimilitude The Grey belabors. (Most of the survivors are bitten by wolves but manage to shake off the pain for as long as the screenplay requires.) Besides Neeson, Dermot Mulroney is the only other name actor in the cast, but the standout is Frank Grillo (who was Joel Edgerton's trainer in the equally manly Warrior). Grillo starts off as an arrogant antagonist feigning bravery where there is none but undergoes an emotional transformation in the crucible of their dilemma. His final moments of surrender to the hopelessness of their predicament are heartbreaking. The wolves, fearsome opponents that they are for the survivors, are real pros -- they read the screenplay and knew exactly when to attack for maximum shock and carnage and when to hang back to give Neeson and the cast ample time for male bonding and brief but effective character studies. The wolves also deserve credit for eschewing movie cliches and not killing the lone black guy first. Neeson is in top form, admirably holding it all together despite being "scared shitless" and doing his best to find a way to lead his shrinking party to some kind of safety. Particularly fascinating is the fact that Neeson's decision-making is faulty; his strategy of leading the men towards the forest in hopes of avoiding the wolves' den ended up accomplishing the exact opposite result. Director Joe Carnanhan (The A-Team) paints a bleak, harrowing portrait of Man enduring against the insurmountable fury of both Mother Nature and Man's inner nature. The Grey's effect lingers long after the final, iconic image of Neeson, armed with  a blade and a fist of glass shards ready to face the Alpha Wolf mano e wolfo for all the marbles, fades to black.
Posted by Back of the Head at 10:15 AM 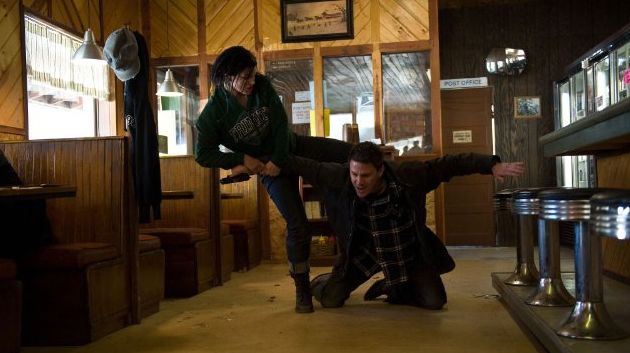 ** SPOILERS **
Haywire goes haywire the very second MMA fighter and star Gina Carano starts speaking. Director Steven Soderbergh attempts to transform her into a female James Bond action hero, banking on Carano's vaunted real-life mixed martial arts skills to solidify her as an action goddess, but Soderbergh appallingly miscalculates Carano's ability to utter dialogue with any consistency. Soderbergh surrounds Carano with tried and true actors: Ewan McGregor, Michael Douglas, and Antonio Banderas, all of whom scratch their heads trying to make heads or tails of the bewildering plot, all in silent agreement that they really couldn't care less either way. In a nutshell, Carano is a former Marine turned special operative contracted to rescue a rogue Chinese journalist, but she is betrayed and must discover why. For half the movie, she explains all of this in a car to a teenage boy she more or less abducts, as she evades McGregor's agents who wish her dead. Haywire globe-hops in the best Bond tradition, zipping across locales like Dublin, Barcelona, and Washington DC, all color-coded in the best Soderbergh tradition. In Dublin, Michael Fassbender seems almost embarrassed as the Bond-like agent who is ordered to dispatch Carano, only to lose a cage match with her in their penthouse suite and finds his face stuffed under a pillow while she pops a cap in his head. Better to hide his red face from embarrassment. As an action picture, Haywire is shockingly stingy with the action; it's overloaded with droning conversations where everyone is constantly explaining everything to each other. The bursts of action, some of it certainly cool, like when Carano bounces horizontally off a wall to subdue a bad guy or snaps arms MMA-style, don't come often enough. If Haywire were structured like the second and third Bourne movies, where Jason Bourne was perpetually in motion and rarely spoke, Haywire might have been better off. Letting Carano's physicality, instead of her mouth, do all of the talking would only have improved matters. Instead, Carano speaks constantly. You've never heard such line readings before. As a lead actress, Carano is a rigid MMA fembot, a walking, talking, jumping, shooting, fighting black hole of empathy, displaying a stunning lack of chemistry with any of the other actors. Even Channing Tatum runs circles around her when he emotes. In the Haywire bad acting triathalon, the best performance is by Bill Paxton, who plays the role of Carano's elderly father as if he'd just woken up from a nap and would prefer to tuck back into bed.
Posted by Back of the Head at 3:17 PM 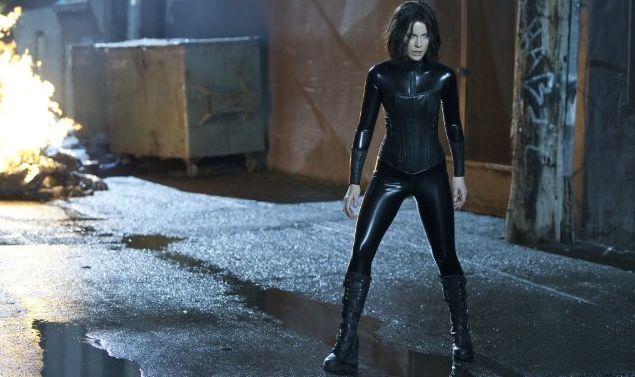 After six years and sitting out the third Underworld movie, the prequel Rise of the Lycans, Kate Beckinsale has returned for the fourth movie in the un-killable franchise, Underworld: Awakening 3D. The ageless Beckinsale is once again Selene, the Erection Dealer -- apologies -- the Death Dealer, one of the few survivors of The Purge that occurred when the humans finally discovered there are vampires and werewolves really living among them and did what many in the real world wish would be done with Twilight - wipe them out with extreme prejudice.

Selene is revived from cryogentic storage 12 years later to find her never-tears, never gets dirty skintight latex bodysuit conveniently in a locker in the same room, and that the world is still perpetually blue-tinted, just as she left it. A couple of things are different: her vampire-werewolf lover Michael is unceremoniously killed off (Scott Speedman skipped Awakening and his face gets digitally added into a body double in some scenes) and Selene now has an 11 year old hybrid daughter, the charmingly named Subject 2. (Eve is her name, says IMDB.) Otherwise, things are just as before - the vampires Selene meets are uncooperative (including Charles Dance, who is Tywin Lannister in Game of Thrones and, like Tywin, has a disappointment for a son) and the werewolves still try to kill her.

Awakening attempts to position the humans as the enemy in the movie, but then reverses tack with a shocking reveal that evil human scientist Stephen Rea is actually evil werewolf posing as a evil human scientist Stephen Rea. Rea's son is the new Big Bad; literally a 12 foot tall werewolf who tosses elevators and cars at Selene and forces her to rethink her trademark strategy of slow-motion somersaulting and shooting werewolves with guns. (Grenades work better than guns on giant werewolves, take note for the future.) Selene's daughter seems to have more of her dad in her on the outset - Michael, supposedly the most powerful because he's both vampire and Lycan, has always been a giant puss - but in a climactic scrape with Rea, Eve proves she can rip organs out of bodies just like mummy dearest. Adorable.

Awakening doesn't end so much as stop once this set of bad guys are grotesquely wiped out, painfully teasing a fifth movie where Michael is apparently alive after all and must be located. This Underworld franchise just won't end, will it? However, even without creator and Mr. Kate Beckinsale Len Wiseman in the director's chair, Awakening consistently maintains the quality standards of the franchise. Awakening is no worse, or better, than any of its predecessors. Suggested re-titling: Underworld: Arbitrary. Also consider: Underworld: Unnecessary in 3D.
Posted by Back of the Head at 2:26 PM

A Dance With Dragons

** SPOILERS **
In July, I read the first half of George R.R. Martin's "A Dance With Dragons" and then put it aside. It's the last Game of Thrones/"A Song of Ice and Fire" novel we'll get from him for a couple of years (at least?), and it was 10 months away from season 2 on HBO.  Had to spread out the time I got to spend in Westeros.
Six months later, I finally read the second half of "A Dance With Dragons". As I tore through the final few chapters, my complaint was: "Where's the crazy shit?" I love these novels in no small part because of the crazy shit that happens towards the end. The Red Wedding/Joffrey's Wedding/The Red Viper's death/Zombie Catelyn is the apex of crazy shit. (No wonder "A Storm of Swords" is my favorite and the best book in the saga thus far.)I feel like the Julius Caesar-like "death" of Jon Snow, the dragons' roasting of Quentyn Martell, and the arrow to the gut of Kevan Lannister was George R.R. Martin aping his own Greatest Hits checklist: "Let's see: I need to kill a male Stark (or the closest thing to), I need to kill a Martell who does something really stupid, and I need to kill a Lannister... but not any of the good Lannisters." Arya Stark continues to operate as if she's in an entirely different book, now 100% removed from everyone and everything else going on in Westeros/Across the Narrow Sea. So many all-stars are across the Narrow Sea - Daenerys, Tyrion, Arya - and you wait for them to encounter each other but they don't. Teeth gnashing commences.Waited the entire book for Stannis Baratheon to stop building snow forts and seige Winterfell finally, but nope. A gruesome death for Ramsay and Roose Bolton is denied me. Gods, those two are pieces of shit. How many years must we wait before the satisfaction of seeing them die? On the other hand, poor Reek. Theon Greyjoy will probably never again have what you or I might consider a good, normal day. It's tough to be a Turncloak.I did mark out for the return of Varys in the epilogue. I've always liked The Spider. However, the reveal of the hidden plot to restore the Targaryens to the Iron Throne -- I don't know. I kind of hate the reveal and existence of Aegon Targaryen being alive and groomed to rule in secret all this time. I always liked the idea that Daenerys was the last Targaryen. But then, she's still just a woman; she can't assume the Iron Throne some day without a man (dragons still won't be enough in Westeros laws.) So the potential is in place, if this whole series ends as I've always suspected and hoped for where everything comes full circle and the Targaryens are again ruling Westeros, to have Daenerys marry her nephew and rule the Seven Kingdoms.Now, who is Ser Robert Strong, Cercei's secret helmed champion? I'm at a loss. Nor do I understand how no one knows who he is but he somehow got appointed a Knight of the Kingsguard. What did his resume and application say? "It says here you're Ser Robert Strong, hailing from... blank. The rest of your application is blank. Well, Ser Robert, welcome to the Kingsguard! King Tommen will be delighted to have you protect and defend His Grace."
Posted by Back of the Head at 7:22 PM