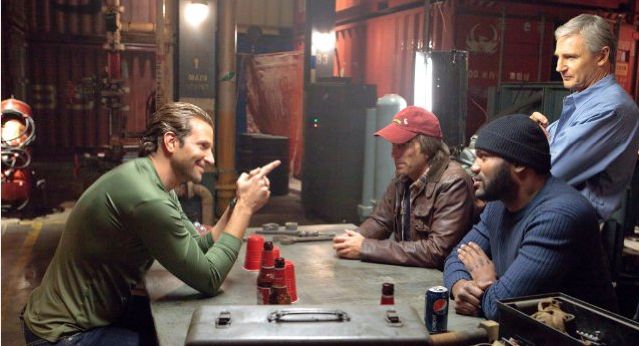 ** SPOILERS **
I love it when a plan comes together, especially when director Joe Carnahan's plan was to go all-out and make a balls-to-the-wall, crazy-ass action movie. The A-Team is a sensationally silly, highly-entertaining thrill ride. This is, after all, a movie about the A-Team, four highly skilled soldiers of fortune who used to help people in need and blow stuff up on 1980's television screens.  Buying a ticket to The A-Team, one shouldn't expect thoughtful ruminations on existence or the human condition. Why would one want that from The A-Team? No, one comes to The A-Team for the A-word: Action. The A-Team is positively overflowing with action and Bad Attitude.

A prelude set in Mexico that might as well have been subtitled "The A-Team Begins" explains how cigar-chomping, tactical mastermind Col. Hannibal Smith (Liam Neeson) and his cocky, womanizing colleague Faceman Peck (Bradley Cooper) meet soulful bruiser B.A. Baracus (Quinton "Rampage" Jackson) and batshit crazy super pilot Howling Mad Murdock (Sharlto Copley).  These are four men, the very best at what they do, who are bonded by their mutual worship of their special forces Army Rangers tattoos. They may have mistrusted or hated each other at first, but those Rangers tattoos they all have in common make them brothers in ink.  If there was a moment of sadness in the opening minutes of mayhem and chaos, it was when Murdock's insane helicopter flying ended up destroying B.A.'s signature black and red-striped van.

"8 years and 80 successful missions later", the real action kicks in as the A-Team is recruited in Baghdad by the mysterious CIA agent Lynch (one of many, in a running joke the movie treated like a dog latched onto its favorite bone) to recover the movie's MacGuffan, stolen $100 plates that the Iraqis planned to use to counterfeit a billion US dollars. Everyone wants these plates, including the Department of Defense, represented by Jessica Biel, the most beautiful and glamorous Army Captain in the proud military history of the United States of America. Biel is a personal expert on the A-Team in general and Face, personally. She's seen more than Face's face, put it that way.

Because the A-Team must become fugitives from justice, as the story goes, the team is betrayed and framed for the death of Army General Morrison (Gerald McRaney). The A-Team then escapes from four different prisons and goes on a worldwide manhunt to recover those plates, clear their names and uncover the mystery of how they were set up in Baghdad. The plot is a bewildering clothesline the action sequences are pinned on, and the answers to the mystery surprise no one who is paying attention.  (I guessed it correctly a half hour before the reveal.) But the identity of the A-Team's betrayer shocked the hell out of the A-Team, especially Hannibal, who normally possesses a God-like prescience. (The rest of the team don't fail to notice and point out when Hannibal's big brain fails them either.)

All of the actors bring their A game to The A-Team. As Hannibal, Neeson lends his unflappable gravitas but peppers it with well-timed bursts of Irish temper. As Face, Cooper is all wide-eyed, wide-grins, and ripped abs; he's basically playing every part of The Hangover solo. Copley is appropriately way, way out there as Murdock. Jackson invokes Mr. T's legendary threatening demeanor while injecting more sensitive and complex notes in his performance as B.A. Baracus. The characters' trademark quirks are honored, especially Hannibal's smug self-satisfaction, B.A.'s fear of flying, and the running gag of knocking B.A. out before he gets on any flying vehicle. All four leads share an easy camaraderie. They joyfully inhabit their characters and remold them in their images. They all seem like they're having a ball playing the A-Team. Biel also plays hard and fast chasing the A-Team while thankfully never becoming one of them; the movie takes every opportunity to point out how hot she is, as if we could somehow forget.

In most action movies, the heroes get all the witty banter while the villains are often monosyllabic stock heavies. To the credit of screenwriters Carnahan, Brian Bloom, and Skip Woods, they spread out the witty banter beyond the A-Team. Patrick Wilson as Lynch and Bloom, who plays Black Forest mercenary Pike, get their share of amusing dialogue. Wilson does a tremendous job playing a slimy heavy with plenty of brains but no balls, while Bloom is rock solid as a one man killing machine who's the antithesis of the A-Team. One of the best scenes in the movie is Wilson and Bloom in a car with two other agents, jabbering back and forth about who betrayed whom while one of the agents blunders about with screwing a silencer on a gun.  It's refreshing in an action movie such as this that every major character in The A-Team has brains and a specific point of view they're not shy about expressing with heaping amounts of snappy chatter.

Biel lays out what to expect early on, that the A-Team "specializes in the ridiculous", and she wasn't kidding.  The action in The A-Team is beyond ridiculous. And loud. My, this movie is loud. My favorite loud, ridiculous moment has to be the team escaping an airplane that's blown-up in mid-air by hiding in a tank, and then attempting to fly the tank into a lake by firing its guns and shooting down enemy drones. (Biel's line reading, "They're trying to fly the tank." is spot-on perfect with matter-of-fact admiration.)  That tops the exploding freighter in the finale, or the four absurd escapes from prison like the 3D movie ending with a humvee crashing through a wall, or how B.A. and Hannibal each take turns running over the loquacious Bloom with various vehicles.

The A-Team cuts a relentless pace. It's just one damn thing after another for Hannibal, Face, Murdock, and B.A., as even the best laid plans of Hannibal go sideways, leading the team from one fine mess into yet another fine mess. Other action movies will attempt to trickery with the audience, leaving us to guess at whatever the heroes are up to. The A-Team is about collusion; it always includes the audience, making us accomplices to their gambits. Hannibal proudly explains every aspect of his insidiously clever, forward-thinking machinations as we simultaneously see his master plans executed.  Carnahan makes sure the audience always shares the A-Team's perspective, so that the audience effectively gets to be part of the A-Team.

I pity the fool who doesn't have a good time watching The A-Team. When the next summer movie season is in trouble, if no one else can help, and if we can find them, maybe we can hire The A-Team for a sequel.
Posted by Back of the Head at 5:06 PM