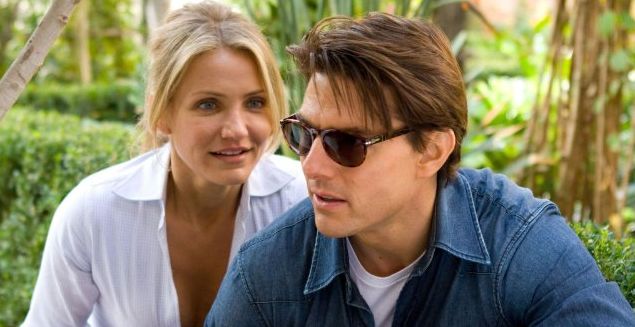 Director James Mangold's action-comedy mashup Knight and Day is a bit of a throwback; it's a modern day version of a Cary Grant and Audrey Hepburn-style madcap spy adventure. Hapless everywoman Cameron Diaz is thrust into the bizarre world of secret agent Tom Cruise, who's protecting a valuable MacGuffan - a high tech battery that could power a small city - from falling into the wrong hands. But, as in those old Cary Grant thrillers, Cruise could also be the villain. Diaz gets humorously dragged around the world against her will, sometimes drugged and semi-conscious, as she tries to determine what side Cruise is really on. Cruise and Diaz starred romantically together in 2001's Vanilla Sky. Knight and Day very much insists Cruise and Diaz are falling for each other, yet there's remarkably little chemistry to be found between their combined movie star wattage. The tone shifts from romantic comedy to standard Hollywood car chases and shoot-em-ups. Cruise lets loose his comedic chops early on but seems much more comfortable in his more familiar norm of rappelling, car chases, and shooting people. It becomes impossible to invest in the action when the movie makes it clear Cruise and Diaz are never in any real danger. The legions of villainous gunmen coming after Cruise and Diaz are all incapable of shooting them, even from a few feet away when hefting machine guns. The first act mainly takes place in Boston so it's enjoyable for locals to see Cruise and Diaz run around the city (even if their movements geographically make no sense), before the action shifts around the world to New York, the Azores, Austria, Spain, and South America. Diaz is in full-on romantic comedy mode; Knight and Day never requires her to tap into her action heroine credentials from starring in two Charlies Angels movies. Cruise, on the other hand, is in full-on Tom Cruise Mode. He hasn't been this Tom Cruisey in a movie in probably a decade. The "I'm the guy!" scene in the diner alone is vintage Cruise at his Cruisiest. Knight and Day provides a Tom Cruise impressionist ample all-new material to add to his act.

P.S. A silver 1999 Mercedes Benz SLK Kompressor two-seater convertable is featured prominently in the movie. The audience is lead to believe that a person the size of Paul Dano can be trapped in the trunk. That is impossible. I drive that exact same car all the time. The trunk of the Kompressor is so small, and more than half of it is taken up by the cradle built to hold the roof when the top is down, that there is no way a person can fit in that trunk. I mean, come on! I hope someone was fired for that.
Posted by Back of the Head at 8:58 AM