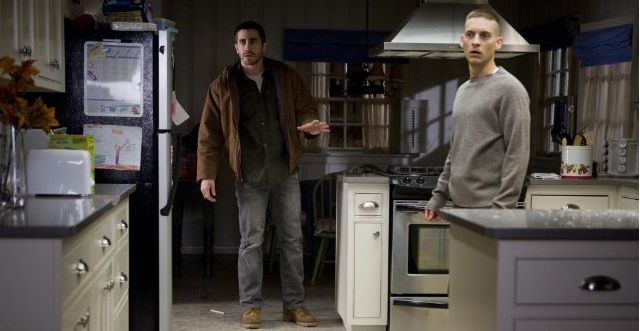 ** SPOILERS **
Even though it's a remake of a Danish film, on the surface, the plot of Brothers is just like Pearl Harbor. Proud Marine Captain Tobey Maguire is married to Natalie Portman, goes off to Afghanistan, is shot down and presumed dead, and Portman and his paroled stick up artist brother Jake Gyllenhaal fall for each other in his absence. (For the record, I've never seen the end of Pearl Harbor. Shut my eyes in the theater to numb the pain after Pearl Harbor was attacked and dozed until the end credits.)  Brothers is a lot more severe and complex than Pearl Harbor. Maguire, like Ben Affleck, didn't die after all. Maguire was held prisoner for over two months, finds rescue, and returns home with post traumatic stress syndrome. Crazy-eyed Maguire, originally the reliable father and husband, is now a frightening powder keg compared to Gyllenhaal, who straightened up and started flying right, taking Maguire's place in Portman's family. (Funny how Daredevil handled a similar situation a lot better than Spider-Man does.) As their daddy repeatedly and frighteningly flies off the handle for no reason, even Maguire and Portman's precocious daughters start to prefer Gyllenhaal. (A dinner scene where one of the daughters screams at Maguire that she wishes he stayed dead and lies about Portman sleeping with Gyllenhaal is particularly awkward and distasteful.)  The plot is largely by the numbers. Try to follow the Metaphor: After Maguire's funeral, Gyllenhaal and his friends (including Ethan Suplee - where's Earl?) build Portman a sparkling new kitchen. Later, Maguire destroys it in a fit of jealous rage. On the plus side, the actors are all quite earnest; they work very hard and turn in very fine performances. I'm particularly impressed by Portman; I think this is the best work she's done since she was 12. Jim Sheridan, who directed In the Name of the Father, expectedly worked in a couple of U2 songs, which was nice. But I gotta agree with the little girl: Everything was better when they thought Maguire was dead.
Posted by Back of the Head at 12:38 PM