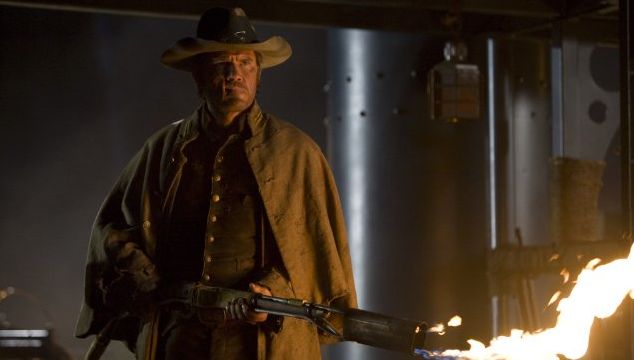 ** SPOILERS **
Set in the wild, wild west of the Carolinas and Georgia - which the movie seems to think is made up of dusty frontier towns run by corrupt sheriffs who reside in Mexican haciendas - Jonah Hex piles on bizarre contrivance after bizarre contrivance. After a token comic booky prologue breezily establishes the tragic origin of Jonah Hex while simultaneously failing to generate empathy for the character, Jonah Hex darts though its semblance of a story to get to its perfunctory action set pieces, punctuated by right-on-time explosions.  On the other hand, Jonah Hex's grasp of American history during the post-Civil War period of Reconstruction is flat out hilarious.
In the White House, with the Washington Monument under construction in the distance, President Ulysses S. Grant (Aidan Quinn) is warned by his intelligence adviser Will Arnett (!) that John Malkovich is in possession of a super weapon - a "nation killer". The Nation Killer, which surprisingly is not a giant robot spider driven by legless Kenneth Branagh this time around, is a big cannon on a boat that shoots golden orbs made up of whatever the Heart of Lost Island is/whatever will be in Marcellus Wallace's briefcase. A distressed Grant proclaims Malkovich "a terrorist", likely coining the phrase, and decides only one man can stop this dastardly plot against the fragile post-Civil War union: Jack Bau --, sorry, I mean Jonah Hex. Jonah Hex turns out to be the weirdest episode of 24 ever.
Working on the outskirts of the law as a bounty hunter, Hex is a former Confederate solider who betrayed John Malkovich to the hated Union when he couldn't go along with Malkovich's crazy plan to blow up a hospital.  In a flashback which the movie keeps flashing back to again and again well past the audience getting the simple point, Malkovich took revenge on Hex by burning his Indian wife and son in their home, then branding Hex's face with his initials ("QT" for Quentin Turnbull, but the nod to Tarantino is unmistakably funny).  That isn't how Hex got his grotesque facial scars, however; Hex cut half his face off himself (I suppose so no one would mistake him for Tarantino). It's unclear whether Hex mutilated himself before or after he was resurrected from near death by obligatory Indian shamans, who cursed him with the power to communicate with the dead. Or something. The Indians also save Hex the same way a second time during the movie. No explanation is ever given as to why the Indians keep magically saving this ugly paleface.

The most interesting stuff in the movie are Jonah Hex's ill-defined supernatural powers. Somehow, and Hex himself is never curious about the hows or whys, Hex can communicate with the dead by touching them. Most of the dead souls he interrogates hate him, but he can make them talk by continuing his death grip, which ignites the dead into ash. Later, Hex goes to the bother of trying to interrogate a living person who hates him. Why didn't Hex just kill him and then use his death grip?  It would have been more effective and a time saver. Hex also seems to magically attract animals to him for no good reason; one stray mutt loyally hangs out with him and can even outrun Hex's horse despite Hex never feeding him or giving him water.

Hex is also haunted by a dream of his final battle with Malkovich, but in his dream, Malkovich repeatedly kicks his ass. (Hex has some serious issues.) When Hex and Malkovich have their final mano e mano, the movie cuts back and forth between the fight in the dream and the real fight happening on the Nation Killer boat.  The constant cutting renders the impact of either fight limp.  And what if Hex finally won the fight in the dream but lost the real fight? That would have been weird.

As Jonah Hex, Josh Brolin turns in an genuinely earnest performance. Brolin tries his damnedest to make a strange, one-note comic book character from the little-read pages of DC Comics' Old West three dimensional and interesting. Hex gets all of the focus - the aforementioned flashbacks, voice over narration, an origin story told in comic book panels - to the diminishment of every other character in the picture. Hex's sole purpose for his existence is vengeance on Malkovich, and that's the most thorough motivation of any character.

Malkovich sneers through his stock role as the heavy; his only goal is to "make war". Malkovich sure does talk funny. I don't mean his Southern drawl, I mean his unusual knowledge of the future. Malkovich's men hijack an Iron Horse train at the start of the movie using Al Qaeda tactics like strapping dynamite to their chests.  Later, Malkovich gives a speech to his Irish henchman, an unrecognizable Michael Fassbender from Inglourious Basterds, describing the life's work of Eli Whitney where he calls Whitney the father of the "Industrial Revolution". It's never explained what the glowing orbs are, how Malkovich found out about them, or how they ended up in Marcellus Wallace's briefcase.

Jonah Hex completely squanders the talents of his supporting cast. Arnett plays deadly serious, resisting the urge to roll his eyes in his every scene. He gets to experience Commissioner Gordon's frustration of turning his back to Hex, who then mysteriously vanishes; the funniest thing regarding Arnett is how he's disposed of. Wes Bentley (who was the heavy in a much worse comic book movie, Ghost Rider) continues his sad career suicide with two scenes which end with him getting disposed of not as hilariously. Lance Reddick drops in as Hex's Q, offering up high-tech anachronistic weaponry before heading off to Washington to hear President Grant speak on the 4th of July (a speech which is oddly sparsely attended). Reddick mistakenly thinks the Million Man March takes place a century sooner than it does.

By default, the second most developed (ahem) character in Jonah Hex is Megan Fox. Portraying the cleanest and, apparently, the only prostitute in the 19th century who has access to Sephora and Proactiv products, Fox is a Wild West wank fantasy come to life.  Fox loves Jonah Hex, purringly urging him during their carefully-wrapped-in-sheets pillow talk to give up his go-nowhere life of bounty hunting. It never seems to cross Fox's mind that her own life of diddling cowboys for dollars doesn't have a future either, nor is Hex a likely prospect for husbandry. But how can Fox not love that face of his?

Despite herself getting punched in the face twice and kidnapped to be used as bait by Malkovich during act three, Fox is no damsel in distress. To establish her tough girlosity, Fox is given a subplot where she kills a client who decides paying her's not as good as raping her. Later, she gamely fights alongside Hex and shoots a half dozen of Malkovich's henchmen dead. I daresay never has a creature like Megan Fox existed in the wild wild west of the Carolinas and Georgia. There wasn't nearly enough of her in the picture.

Fox isn't the only person who can see past Jonah Hex's disfigurement and realizes he's really a stand up fella. President Grant already had a hard-on for Hex even before Hex saved Washington DC from annihilation. Grant is so grateful, he offers Hex a shiny badge and the newly-created position as "Sheriff of America" - I gotta be honest, I laughed my fucking ass off when that happened.  Hex turns the badge down, doing what's best for America, and rides off into the sunset to presumably play little house on the prairie with Fox.

As the credits rolled, nobody in our theater (all eight of us) left. They must have all been confused about the Marvel Comics movie strategy of adding a surprise bonus scene at the end. Jonah Hex should have indulged the fanboys and had Hex in a bar get approached by Alan Quatermain or Tom Sawyer with an offer to join The League of Extraordinary Gentlemen. It would have made as much sense as anything else in Jonah Hex.
Posted by Back of the Head at 2:51 PM