Spider-Man: Into The Spider-Verse

SPIDER-MAN: INTO THE SPIDER-VERSE 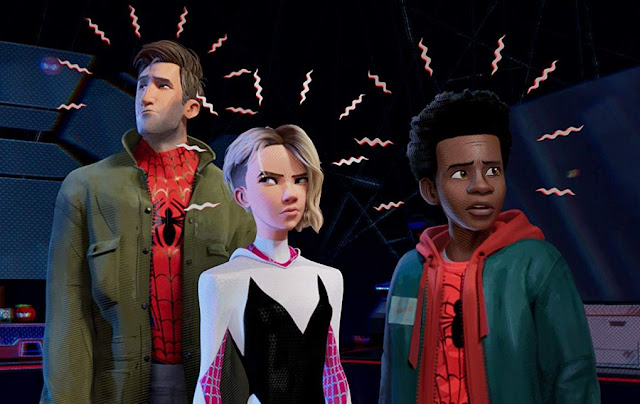 "All right, let's do this again..." Spider-Man: Into the Spider-Verse says repeatedly as a clever in-joke as it introduces every version of Spider-Man in the film, and we're glad they did do it - again. The 7th Spider-Man movie, the first animated theatrical Spider-Man movie, and the first Spider-Man movie featuring Miles Morales (Shameik Moore), Gwen Stacy/Spider-Gwen (Hailee Steinfeld), and Peter Porker, the Spectacular Spider-Ham (John Mulaney), Into the Spider-Verse is a vivid, electric, and loving examination of all of Spider-Man's tropes, reaffirming why the amazing wall-crawler (any version of him) is the best superhero of all.

With Spider-Verse, Sony Pictures ImageWorks outdid themselves with absolutely stunning, immersive, and gorgeous animation that turns Spider-Verse into a living comic book (in a way Ang Lee only dreamed of and failed at when he tried something similar with his 2003 Hulk). Just as Pixar's animation was revolutionary and set a new standard for a generation in the 1990s, Sony ImageWorks' animation for Spider-Verse is a dizzingly high new bar that every other studio will be racing to climb up the walls to match. Spider-Verse makes the colorful, melodramatic, and hilarious world of Spider-Man explode onto the screen, presenting an experience unmatched even by the live-action films, while still delivering all the heartfelt emotion and pathos of a proper Spider-Man story.

In Spider-Verse, Miles Morales is just an ordinary kid from Brooklyn who feels he doesn't measure up to his cop father Jefferson Davis (Brian Tyree Henry) or his cooler uncle Aaron (Mahershala Ali). Aaron is secretly a supervillain called the Prowler who works for the Kingpin of Crime (Liev Schreiber), and the Kingpin has built a super-collider underneath the city. He plans to use it to breach other dimensions in order to bring back a version of his dead wife Vanessa and son Richard. Instead, Kingpin inadvertently transports a handful of alternate universe Spider-People into his world, who naturally team up with Miles to stop him.

Miles discovers all this as he watches the death of Peter Parker (Chris Pine), who has been Spider-Man in this universe for 10 years and was the most wildly successful version ever (until he died). This Peter Parker was happily married to Mary Jane Watson (Zoe Kravitz), has a badass Aunt May (Lily Tomlin), a Spider-Cave with Spider-Gadgets and an entire wardrobe of Spider-Costumes. It's an ultra-confident, maximum swagger version of Spider-Man we've never quite seen before, which is why it's all the more crushing for Miles (and us) when this Peter, who wanted to be his mentor, heroically died. Instead, Miles gets a different mentor, Peter B. Parker (Jake Johnson), a 38-year-old down-on-his-luck Spider-Man who's out of shape, pining for his ex-wife Mary Jane, and is well past his Spider-Prime. But any port in a Spider-Storm and together, Peter and Miles investigate the Kingpin's company, running afoul of a new, female Doctor Octopus (Kathryn Hahn).

Of course, the Spider-Men get in trouble and are in over their heads. Luckily, the other Spider-People from the Spider-Verse come to the rescue; along with Spider-Gwen (who was posing as Miles classmate at Brooklyn Visions High School) and Spider-Ham, there's Peni Parker (Kimiko Glenn), an anime version of Spider-Woman with a Spider-Robot, and Spider-Man Noir (Nicolas Cage), the brooding, tormented 1930s version of Spider-Man who is perpetually in black and white and is baffled by the mysterious Rubik's Cube. Together, they take on the Kingpin and his arch villains - but, at first, without Miles, who lacks the self-confidence to become what he is meant to be: the Ultimate Spider-Man.

Eventually, Miles Spider-Mans up and adopts his super cool black and red costume, but not without hilarious spins on the training we've seen Tobey Maguire, Andrew Garfield, and Tom Holland go through, like Miles chickening out of his first time leaping across rooftops. Into the Spider-Verse is Miles' coming-of-age story, and by the end, when he heroically gets the other Spiders to their proper dimensions and stops Kingpin himself, we are won over when he has truly earned the mantle of Spider-Man. (Even if Officer Davis is confused when the new Spider-Man hugs him tightly and tells him he loves him).

Thwipping with dynamite in-jokes, Easter eggs, and clever cameos (along with the late Stan Lee's apperarance, Spider-Man 2099's post-credits scene set in the 1967 cartoon is simply brilliant), Into The Spider-Verse reaffirms that with great power comes great responsibility, but what it does best is ignite the sheer power of inspiration the Amazing Spider-Man has over all of our imaginations. Stick around through the credits just to hear Chris Pine's Spider-Man sing the "Spider-Bells" Christmas carol.
Posted by Back of the Head at 8:33 AM