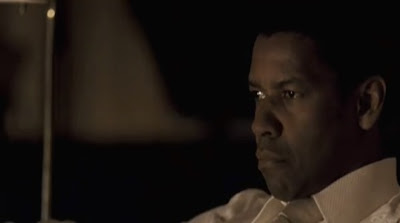 Did I ever mention Denzel Washington is my favorite movie star? Odd if that's news to you. Seems like I say it over and over to everyone within earshot whenever a new Denzel picture opens. Let me state for the record, gentle reader, that Denzel Washington is my favorite movie star. I like a lot of actors, I'll go see a movie because of certain actors (I also hate certain actors and abhor seeing their movies but we won't go there), but there's only one guy at the top for me. There's Denzel and then there's everybody else. Ever since I was a teenager and saw Malcolm X for the first time (although it took me another 10 years to read The Autobiography of Malcolm X, which is now one of my favorite books), Denzel has been The Man. "My man," as he likes to say.

I was one year old when Frank Lucas was sent to prison for conspiracy to distribute narcotics so the filthy, corrupt, crime-ridden New York City of the early 1970's depicted in American Gangster is the stuff of legend. New York today can still be dangerous although I lived there for years, still visit often, and never see any crime firsthand. Sir Ridley Scott and his filmmaking team palpably recreate New York circa 1968-1976. This was a time when the microwave oven was a new and scary invention.

So thorough and immersive is the experience that you can almost smell the sweat and desperation of the junkies and can almost feel the grit and dirt under your fingernails. From the apartment buildings in the projects of Harlem to the swank night clubs owned by the Mafia to the seedy diners in New Jersey, everything feels authentic. The soundtrack is persuasively of the era yet avoids being a jukebox of the most obvious pop hits. Plenty of movies have parodied the 70's in recent years but American Gangster doesn't mock, it brings the era to life.

About half an hour into the picture, Frank Lucas dons an afro wig and observes incognito as the pure grade heroin he purchased from Southeast Asia reaches his customers on the street. I sat there wondering what was going through his mind as he watched his fellow black people shoot up his "Blue Magic", heroin with a brand name as "trusted" as Pepsi. This is something Malcolm X wouldn't have stood for, to have a black man poison other black people and get rich off their addiction.

A few scenes later, Lucas reaches out to his family living in poverty in North Carolina and brings them all to a brand new estate in New Jersey, which he built for his elderly mother. They have a loving Thanksgiving dinner before Lucas brings his brothers and cousins back to Harlem and makes them underbosses in his "company". Frank Lucas is a man who gives a speech about how family is the most important thing, and then he immediately lets them watch as he shoots a rival in the head on the street in broad daylight.

Frank Lucas falls for and marries a Puerto Rican beauty queen, convinces her he's a gentleman, and later beats his cousin to death at a party in his home in front of her and their guests. He's devoted to his wife, never gives a second glance at the cheap and easy prostitutes during his Vietnam excursions, but makes the women who cut and bag his heroin work completely naked "so they don't steal anything."

Not quite as fascinating but intregal to the story (because if he didn't exist, Frank Lucas would have only risen and not fallen), is Russell Crowe as Richie Roberts, the honest cop who brings Lucas down. Roberts is famous within the New York drug community as the cop who found a million dollars in unmarked bills and turned it into evidence instead of pocketing it like all the other crooked cops. Roberts may be a straight arrow but he's also got his crazy streak; I especially liked a scene in the park when some teenagers were annoying him to he threatens that he's "gonna have to kill" them because they didn't shut the fuck up like he ordered.

Roberts's unyielding honesty as a cop balances his disasterous personal life as a dead beat dad who cheats on his wife Carla Gugino with strippers, hookers, and his hot divorce lawyer. But goddamn it, Roberts isn't on the take, so he's the good guy. And he is, in spite of his failings. There's a heartbreaking scene where Gugino calls him out at their custody hearing for being a deadbeat philanderer and Roberts realizes she's right, surrenders the fight for his son, and walks out of the courtroom.

The home run of the movie's plotting, though, is the fur coat. Frank Lucas is a stylish man but he's business-like and proper in his appearance. He scolds his younger brother Chwetel Ejiofor (another of my favorites, reunited with Denzel from Spike Lee's Inside Man) for wearing a gaudy "clown suit", musing that the "flashiest one in the room is also the weakest one in the room." The one time Lucas breaks his own rule, when his wife Eva gives him a ghastly fur coat and hat which he wears to Ali-Frasier II so as not to offend her, he draws attention to himself and gets made by Roberts and his special narcotics team. (What a shame they couldn't get Will Smith to cameo as Muhammad Ali.) Later, when Lucas realizes what did him in, he throws the fur coat in the fireplace. Let that be a lesson to all men: don't ever wear a big, stupid fur coat.

American Gangster is a pretty fucking great movie but it does run a bit long. Denzel and Crowe only finally come face to face in the final ten minutes, reuniting them for the first time since 1996's Virtuosity, a year before Crowe achieved stardom in LA Confidential. Their scenes, as Denzel agrees to work with Crowe to name names and bring down the corrupt New York cops, are an all-too-rushed denouement wrapping up the story. As good as their scenes together are, they lack the electricity of Robert DeNiro and Al Pacino's coffee shop conversation in Heat. The closing title cards even run over their scenes.

The last shot of Lucas walking out of the federal penitentiary in 1991 with Public Enemy playing on the soundtrack is pretty awesome. By the time he walks out a free man, his wife has long since left him, his family members are still in prison or dead, his money is gone, and he missed the 1980's entirely. Yet one gets the impression that while he's out of Blue Magic, he's still got some of that ol' black magic and he can make it all happen again.
Posted by Back of the Head at 7:04 PM