LARS AND THE REAL GIRL 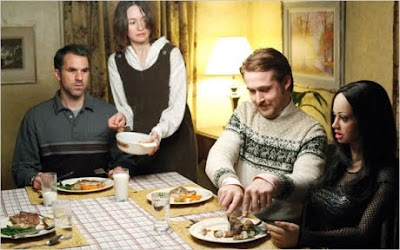 October 17, 2007
Lars and the Real Girl tells the heartwarming story of an emotionally stunted man who buys himself a sex doll online, passes her off as his girlfriend, and somehow the whole town plays along. Ryan Gosling plays Lars. He's a deeply repressed man with serious abandonment issues (his mother died during childbirth) who becomes delusional. Also he dresses in ugly sweaters. Gosling plays Lars with constant eyeblinking, nervous ticks, and all wide, thin-lipped smiles. Because it's the dude from The Notebook playing him, a cursory glance of the ladies in the audience told me they were registering Lars as a sweet, attractive guy with a serious problem they wanted him to overcome instead of what I was seeing him as: a potentially dangerous time bomb. But then, I thought Rachel McAdams should have stayed with Cyclops in The Notebook.

Lars buys himself a Real Doll, which in the movie is called Bianca, although is/she looks a lot like "Stacy" on the Real Doll website (ah, research). He manufactures an entire backstory about her being an orphaned, wheelchair-bound Brazillian missionary to explain her to his brother and pregnant sister in law (Emily Mortimer). Lars also conjures Bianca as being deeply religious to explain why he doesn't actually have sex with his sex doll. But he's totally serious about thinking that she's real and she's his girlfriend. He eats its/her food for it/her and has one sided conversations with it/her. He even has fights with it/her. That's right, he argues with his plastic girlfriend but doesn't get the makeup sex afterwards. The guy is nuts.

Lars's brother has some touching scenes where he blames himself for leaving home and Lars too soon, which he fears eventually lead to his brother paying five grand for a plastic girlfriend he doesn't have sex with. Lars's brother is the only person in the entire movie who sees what's going on for what it is and fears for Lars believably. He and Mortimer take Lars to see the town shrink, Patricia Clarkson, and then they ask the rest of the town to play along and not upset Lars. From the intriguing problem set up, things start to go south.

In a meeting with the town elders, the local priest considers their situation and asks, "What would Jesus do?" It's tough to say, padre, but consider that Jesus might not have done what you guys did: take Bianca, give her a fake job, fake appointments, and basically all pretend that she's real. The entire town bends over backwards to make like this plastic love toy is a real person, so much so that it/she begins spending less time with Lars and Lars doesn't like it. Luckily, there's a real girl in Lars life, Kelli Garner (who's pretty hot in real life but they sure uglied her up here. She looks a step above Charlize Theron in Monster.) Garner patiently waits for Lars to work out his disturbing issues. The movie sets up from the outset that she likes him and she's the girl for him so the conclusion of their story is pretty rote and unsurprising. Garner doesn't seem to realize that with a little makeup and nice clothes she can do a lot better than that psycho.

I'm giving Lars and the Real Girl three stars, but on the lower end of that rating. They accomplished what they were trying to do, and Gosling gives a convincing performance as Lars, but there was potential here that was left unexplored, questions that could have been answered. For instance, Lars is crazy, but the way the entire town accepted Bianca as their own raised serious questions about the sanity of everyone else. The comedic possibilities were touched upon but could have been mined deeply. I began to wonder whether Lars was really just bullshitting everyone (he wasn't), why the townspeople were going along with it (because they all love Lars as Mortimer claimed? Doubt it), and whether or not people were afraid of him (they probably should have been.) As the movie progressed, the circumstances regarding how Bianca departs from the story are absurd and wildly stretch credibility. (No way 911 shows up and ambulances a sex doll to the hospital.) If the movie were more comedic-minded, they would have had more leeway to do the things they did in the last act, but the filmmakers were intent on playing Lars' plight as heartwrenching drama.

Lars and the Real Girl however is an unbelievably persuasive advertisement for the Real Doll. The manufacturers of the Real Doll must be real pleased. Real Dolls aren't just for sex! Apparently, the Real Dolls are wondrous, miraculous creations that can not only heal the most emotionally disturbed of us, but they have the power to bring an entire town together. I know when the movie was over I wanted one. They handed out posters of the movie to everyone exiting the theater. What they should have done was hand out Real Dolls. If they did, I wouldn't be writing this review right now, I can assure you.
Posted by Back of the Head at 10:45 AM