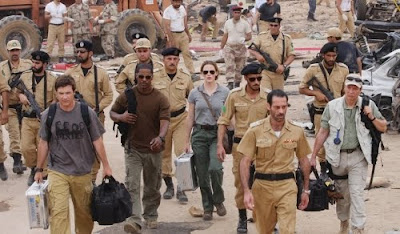 October 1, 2007
"We'll kill them all."
Whatever Stephen Sommers is up to with his G.I. Joe feature film, The Kingdom has already beaten him to the punch. The Kingdom is basically a G.I. Joe movie set more like the original Marvel Comics written by Larry Hama in the 1980's: a small elite team of American specialists enter Saudi Arabia to investigate the destruction of the American compound and track down the terrorists responsible, who are Saudis and not Cobra. The plot descriptions of The Kingdom I've seen often state that Foxx's FBI team are sent to Saudi Arabia. This is inaccurate. Jamie Foxx actually goes renegade and inveigles his team's way into Saudi Arabia to investigate the bombing after being banned to do so by slimy U.S. Senator Danny Huston (always great in every role). Once in Saudi Arabia, Foxx's team is stonewalled left and right in their investigation by their Saudi handlers until they form a bond and understanding. From there Americans and Saudis work together to find the true culprits responsible for the bombings.
The Kingdom opens with the most entertaining opening credit sequence since the opening credits of David Fincher's Se7en, explaining the history from 1931-2001 of Saudi Arabia striking oil and the United States' becoming the largest oil consumer in the world. With the enemies being a Saudi terrorist cell, The Kingdom takes great pains to paint the Saudi characters in the movie as three dimensional people and not all evil, suicidal monsters. The Kingdom shows the simple things even terrorists have in common, like love for their families, separated into murderous intent by misguided ideology. The bond Foxx forms with his intitially hostile Saudi counterpart Faris Al Ghazi is touching, as is Foxx's relationship with his young son and his habit of visiting the sons of his dead partners. By the end, lessons are learned, people are changed, but the problems aren't solved, nor should they be. Critics have complained that The Kingdom simplifies or "dumbs down " the complex issues of terrorism in the Middle East. At the end of the day, The Kingdom is an action movie and first and foremost has to perform as one. It touches on the issues, raises questions, but must solve its story dilemmas with action and violence. By the end, The Kingdom convincingly argues "we'll kill them all" can't be the answer.
The action is depicted as realistic, although Foxx, Jennifer Garner, and Jason Bateman take on more superheroic action movie traits in the final 30 minutes. The Kingdom has probably the best use of Jennifer Garner I've yet seen in a movie. Playing on her five seasons as a secret agent on Alias and two comic book movies as Elektra, Garner survives a brutal fight scene that logically should have killed her and Bateman. To its credit, The Kingdom's characters are all very human. They bleed, they feel, they argue, they grow, change, and understand.
Fresh from portraying Tubbs in last year's Miami Vice, Foxx seems happy to be the center of attention without his erratic partner Crockett. Foxx relishes the command role and doesn't have to worry about any of his partners disappearing to Cuba for a sexy getaway with Gong Li. The Kingdom confirmed suspicions that Miami Vice would have been better if it were more about Tubbs than Crockett. Garner frowns a lot, provides gravitas and tank-top clad boobies, although as a coroner, it turns out she couldn't do her job since Muslims freak out if a woman touches Muslim corpses. But without Garner there, the movie couldn't highlight how fucked up Muslim attitudes are towards women. Bateman gamely gives comic relief and serves as the audience's window into the story ("What am I doing here? This place is scary. I better crack some jokes"). When Bateman is kidnapped by Muslim terrorists, I was reminded a similar thing already happened to him and Gob in Iraq during season 3 of Arrested Development. Chris Cooper is a calming presence amidst the chaos. But Ashraf Barhom as their minder and later partner, Col. Faris Al Ghazi, steals the whole show.
The Kingdom was like watching Friday Night Lights except with guns, terrorists, killing and explosions instead of football, right down to the ambient soundtrack by Danny Elfman perfectly mimicking W.G. "Snuffy" Warren and Explosions in the Sky's FNL scores. Worked for me. I love Friday Night Lights, I like Peter Berg, I like Jamie Foxx, I like Jennifer Garner, I like Chris Cooper, I like Jason Bateman, I like guns, killing, explosions, and action movies. Therefore, I loved The Kingdom. And I especially loved the cameos by Friday Night Lights's own Kyle Chandler and Minka Kelly. If there was a way to squeeze Connie Britton, Aimee Teegarden, and hell, the whole town of Dillon, Texas into The Kingdom, by God, Peter Berg should have done it.
Posted by Back of the Head at 7:03 PM