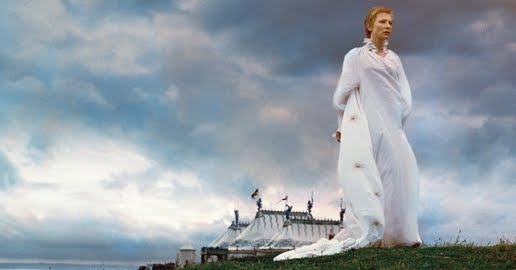 The Enterprise of England


Elizabeth: The Golden Age is a two hour movie that feels like three hours. This is meant as a compliment. There's so much going on in the film, so much intrigue, war, and quasi-history, it feels like a miniseries, but I never found any of it boring. The sets and costumes rival last year's Marie Antoinette for splendid opulence, bordering on excess, but Elizabeth: The Golden Age tells a more ambitious, sweeping story and has far superior performances. For my money, this sequel is also better than 1998's Elizabeth. The Golden Age not only features Cate Blanchett in a tour de force eclipsing her previous performance, but supporting her is Clive Owen in place of Joseph Fiennes. That's like trading blended horse manure for frosty chocolate milkshakes.
The story in The Golden Age weaves between sexual intrigue in Queen Elizabeth's court and the labyrinthine plot by Catholics King Phillip of Spain and Mary Queen of Scots to have Protestant "godless bastard" Elizabeth assassinated. (A plot referred to in the film as "The Enterprise of England".) When the big reveal happens of who betrayed whom, who really did what and why, in the words of Homer Simpson, it's "a plan fiendishly clever in its intricacies."
The Golden Age is an (attempted) murder-mystery in its first half (it's no spoiler to reveal that Queen Elizabeth is not assassinated) and a naval war movie in its latter half. The Spanish Armada sets sail to invade England in full-scale war, only to be miraculously defeated by the outnumbered English forces. (Hey, it's history.) By the time Clive Owen as Sir Walter Raleigh leads his galleons to a fiery victory against the mighty Spanish Armada, I half expected Captain Jack Sparrow, Will Turner, and Elizabeth Swann to show up and lend him a hand. (Captain Barbossa Geoffrey Rush returns as Elizabeth's spymaster Walsingham but his feet remain firmly planted on dry land.)
Blanchett is fantastic as Elizabeth, even more comfortable and commanding wearing the crown. It's a slam dunk nomination for a Best Actress Oscar, especially for the ways Blanchett lays bare Elizabeth's buried fears, jealousies, and secret desires. She also looked pretty damn sexy in her royal suit of armour. Owen is as good as I've ever seen him as the charming pirate Sir Walter Raleigh. Owen delivers an electrifying monologue where he describes for the Queen what it's like to cross the ocean on a ship searching for the New World. Film is a visual medium with a hard and fast rule of "show it, don't say it" but Owen proves a rare case of how much more effective it can be when an actor is allowed to describe something with just words and his talent, allowing the audience to join the Queen in visualizing what he's saying with our minds' eyes.
Samantha Morton delivers an unearthly performance as Mary Stuart, Queen of Scots. Morton portrays Mary which such sympathy, dignity, desperation, and regality, especially in how she faces her execution, that if I were Blanchett's agent, I'd have lobbied to have her cut from the movie. Morton gets the Best Supporting Actress Oscar if I have anything to say about it (and I don't.). Geoffrey Rush, meanwhile, is as reliable as ever but isn't given a whole lot to do besides skulk around the edges of scenes spying and then apologize twice, to his traitorous brother and to his Queen, for not being all the spy he could be.
It's not all good news for the acting though. Abbie Cornish as Bess, Elizabeth's ward and favorite maiden-in-waiting, doesn't fare too well with her attempts at an English accent. On the Costner Scale, Kevin Costner as Robin Hood: Prince of Thieves being a 10, she's about a 7. It was also distracting how Bess, whom everyone in the court knows is the closest person to the Queen, is somehow able to wander around London unescorted whenever she wants, visiting pirate ships and the homes of her cousins, known Catholics and conspirators against the Queen. And maybe I'm mistaken, but part of the movie's R rating is for nudity. I believe we were promised some boobies. I'm looking at you, Cornish. (The bare ass of Blanchett's body double doesn't count.)
The Golden Age ain't shy about its ambitions as full-fledged Oscar bait for Best Picture and Best Director, but it won't be getting either trophy. The performances carry the picture. The Golden Age is spottily edited, has some questionable and distracting camera work, and has an obnoxious score that in quieter moments works to practically sabotage the actors. Director Shekhar Kapur might as well have hopped in front of the camera periodically and waved, "Look at me, everyone!" And everyone would have yelled back, "You suck! You can't direct!" Still, one thing I can't fault Kapur for is that he really seems to love Queen Elizabeth I. The Golden Age is the second of his planned trilogy of Elizabeth movies. I suppose William Shakespeare will make an appearance in the third Elizabeth. That's cool with me as long as everyone loses Joseph Fiennes' phone number.
Posted by Back of the Head at 11:09 PM