Underworld: Rise of the Lycans (*)

UNDERWORLD: RISE OF THE LYCANS 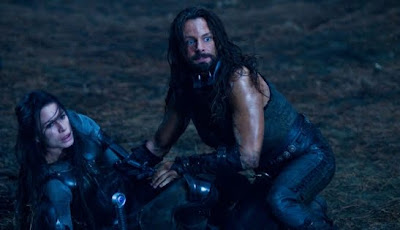 Dreary, coated in viscera, for-fans-only prequel steeped in who-honestly-cares Underworld mythology, Rise of the Lycans is also a sweaty, screamy vampire-hearts-werewolf version of Romeo and Juliet. Rhona Mitra, daughter of vampire king Bill Nighy, loves Michael Sheen, the big bad wolf. The doomed lovers live in a questionable period of history where armored vampires live in some sort of mountain cave city surrounded by werewolf-infested forests. Between the loud, bloody battles between vampire and werewolf are loud, boring debates about vampire politics and loud, screaming arguments about vampire family loyalty. Meanwhile the werewolves plot for their interests against the vampires. What's never clear is why a human audience would be interested in any of it.
Posted by Back of the Head at 7:55 PM