Harry Potter and the Order of the Phoenix (***)

HARRY POTTER AND THE ORDER OF THE PHOENIX 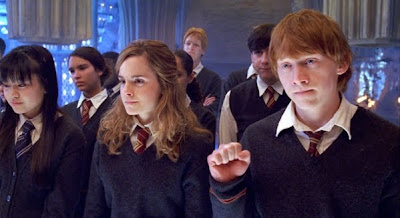 
If you have the option, IMAX 3D is the way to go. The 3D is excellent, amazing. The final scenes in the Ministry of Magic including Dumbledore's Army vs. The Death Eaters and Voldemort vs. Dumbledore are in 3D. You're completely immersed in the experience. It was much better than the Superman Returns 3D last year, where it seemed like Superman was actually farther from you. With Harry Potter, the 3D characters just about leap off the screen.
July 11, 2007


Harry Potter and the Order of the Phoenix effectively marches the Harry Potter saga one step closer to its inevitable conclusion yet manages to bring the Harry Potter film series an unfortunate step backwards. To be sure, Order of the Phoenix maintains the level of quality present in all of the Harry Potter films. It's as good as, and often far better, than the initial two installments, The Sorcerer's Stone and The Chamber of Secrets, directed by Chris Columbus.
But compared to the amazing filmmaking on display in the back to back triumphs of Prisoner of Azkaban by Alfonso Cuaron and Goblet of Fire by Mike Newell (in that order of quality), David Yates' workman-like effort gets the job done but falls far short of the Cuaron's greatness and Newell's near-greatness. There is nothing in Order of the Phoenix to rival the sheer joy of Cuaron's third act time travel sequence or the fun and teen drama of Newell's Yule Ball sequence. Nor is there anything as imaginative and haunting as Newell's underwater encounter with the mermaids or rivaling the action found when Harry battled the dragon in the Triwizard Tournament.
There's still plenty of magic in Order of the Phoenix, but then again, in the final analysis, it's not all there, is it? This is not a comment on how true the movie is to the novel but an observation of how the movie didn't quite deliver everything it could have. In screenwriting, the same rules apply as they would if you were attending a party: get in late, get out early. Many scenes in Order of the Phoenix suffered from 'getting in late, and then forgetting how to get out altogether.' Order is the shortest of the Potter films at around 2 and a half hours, but it never finds a consistent structure or tone and many scenes wrap too quickly without getting all the oomph they needed. The most grievous failure of the film is how the death of Sirius Black is handled. It happens too quickly and completely fumbles how the most significant death in Harry Potter's life up to that point in the saga should have felt for him and for the audience. How can it be that the death of Cedric Diggory in Goblet of Fire is presented as more heartbreaking and terrible than the murder of Harry's beloved godfather?
What annoyed me most is how much of the best stuff that happens in the book, the turning of Hogwarts school into a police state run by Delores Umbridge, is played for humor and gags. The sinister events at Hogwarts, how Umbridge gains control of the school and institutes a totalitarian reign of fear and repression, is rushed through in a cheery montage. In fact, much of the second act of the film was practically one giant montage of half-scenes, including how Umbridge becomes Hogwarts High Inquisitor, her inspection of the professors and attempted expulsion of Trelawney, and the marginalizing of Dumbledore as Headmaster. Most disappointing is how the core story of Harry, Ron, and Hermione forming Dumbledore's Army with their fellow students and secretly training in the Defense Against the Dark Arts is rushed and lacking in proper weight and impact.
The heart of Order of the Phoenix is teenage rebellion, the students fighting the power - the evil that has infested their school from within - and taking matters into their own hands. While the spirit of the rebellion is touched upon, mostly through Hermione's behavior, the story of Dumbledore's Army is mostly presented through a series of training montages that Trey Parker could rewrite the South Park montage song for.

Every day their spells get a little bit better
To show it all would take too long
We need a montage!
A wizard training montage!

It just doesn't resonate like it ought to have. Yes, Order a dense story with a great deal of material to convey, but I wish they'd slowed down and given us complete proper sequences. They also rushed through the revelatory flashback when Harry learns through Occulemcy that his father wasn't the great man he always believed him to be after he sees the way his father bullied Snape as teenagers.
Order is also the Potter film that most requires an intimate familiarity with the novel. The film practically needs the audience to have read the novel in order to fill in the blanks of the various story points. (For instance, Sirius Black's house elf Kreacher makes it into the film but doesn't serve a need in the story as he does in the book. It's never clear when Harry dreams Sirius is captured and tortured by Voldemort whether it is just a dream or was actually happening like the attack on Mr. Weasley. And if you can't tell the difference between Apparating and materializing via Floo powder, the character reveals and staging of a lot of the action in the climactic battle scenes won't make much sense.) New characters like Tonks, Grawp (the CGI here was terrible), and Kingsley Shacklebolt, are introduced but only half-heartedly, with returning characters like Mad Eye Moody, Lucius Malfoy, and Cornelius Fudge being given the bare minimum to work with as characters.
One of the biggest changes made for the film was how Harry and Cho Chang's ultimately doomed relationship is resolved. They share a kiss but there is no ill-fated date in Hogsmeade as there is in the novel, and Cho's jealousy over Harry's close relationship with Hermione is fleetingly touched upon when Harry blows her off and runs off with Hermione and Ron to see Hagrid. In the film, Cho is revealed to be the traitor who is forced by Umbridge's cadre of Slytherin students to give up Dumbledore's Army and her friendship with Harry is swept aside as the story rushes headlong and checks off all of the necessary points to get to the end.

Despite all of these problems, there is much to like about Order of the Phoenix.
Harry in the film continues to be more heroic than the Harry in the novel. The depth and scope of what Harry is up against, both externally and within his own mind, is one of the most effective things about the film.
The relationships, camraderie, and rapport between Harry, Ron and Hermione (and between Daniel Radcliffe, Rupert Grint, and Emma Watson) continues to be wonderful. They have one of the best moments in the whole movie together when they share a laugh after Hermione explains what wide range of emotions Cho is going through and Ron can't fathom how anyone could feel so much.
Hermione effectively assumes the role of Harry's consigliere in Dumbledore's Army and she's even more thoughtful and on her game; all throughout the movie as Umbridge lays out her plans for Hogwarts, you can all but see the wheels in Hermione's mind turning as she's strategizing counter attacks.
The young actors are again well complimented by the great veteran actors like Gary Oldman, David Thewlis, and Michael Gambon. Helena Bonham Carter chews the scenery nicely as Bellatrix LeStrange. She'll have even more to do in the next film.
I thought the newest member of Harry's extended group of classmates, Luna Lovegood, came off really well. She's different from how she's written in the novel. The film's Luna is more ethereal and thoughtful, less an object meant for ridicule. Luna had some interesting and effective scenes with Harry throughout, while Ginny Weasley got some nice action beats but not a lot to say.
Certain moments in the novel were vividly reimagined and made more cinematic for the film, such as the opening sequence where the Dementors attack Harry and Dudley Dursley.
I liked the decision to have all of Dumbledore's Army tortured by doing lines in their own blood in the same way Umbridge tortured Harry. This lead to a really nice little moment where Fred and George Weasley comfort a crying underclassmen, showing a previously unrevealed compassionate side from the twins. And of course, I loved the Weasley twins declaring war on Umbridge and blowing out of Hogwarts in a blaze of glory.
The final battle sequence in the Ministry of Magic was as exciting as it needed to be, with Dumbledore's Army holding off and inevitably falling to the Death Eaters until they are saved by the Order of the Phoenix. The epic battle between Dumbledore and Voldemort was pretty awesome.
Order of the Phoenix, however, saved its best trick for last, after Voldemort decides to retreat. When he possesses Harry, outwardly transforms him, and they mind meld, the film enters a whole new level when Harry fights off Voldemort and tells him he feels sorry for him. This is a truly great moment and gives us the first real inkling at how Harry will be able to defeat Voldemort (well, if he does. We'll know next week when "The Deathly Hallows" comes out.)
Ultimately, Order of the Phoenix is good enough, but after five movies in six years, for the first time I look to the future of the Harry Potter films without a boundless sense of optimism. We went from good, to better, to GREAT, to almost as great, back down to good/better than good. I fear we've leveled off, the sky's no longer the limit for these films. David Yates and his penchant for overusing wide-angle lenses are rumored to return to direct Harry Potter and the Half-Blood Prince. I don't like this new order, I want the old order back. I'd much prefer to have Steve Kloves back writing the script and someone else, Cuaron, Newell, or an equally visionary filmmaker, behind the camera. The Harry Potter film saga deserves nothing less than the best. "Good enough" just isn't good enough for Harry.
Posted by Back of the Head at 4:18 PM