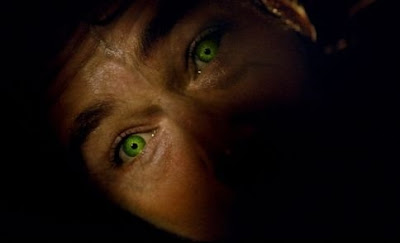 It was a curious thing to watch The Incredible Hulk, a more-straightforward, crowd-pleasing, comic-booky take on the material, and end up continually reflecting on the things Ang Lee's Hulk movie did right. I wouldn't count myself as a fan of the maligned 2003 Hulk, but there are certain aspects of it I remember fondly: the Hulk swinging the tank and tossing it in the air and the dreamlike qualities of the Hulk leaping through the skies. Both sensations were oddly missing from the new Hulk movie.

This re-imagined Hulk is properly angry, green, and certainly powerful; he smashes a lot of shit and screams bloody murder (Ang's Hulk was mostly silent, if I remember correctly). But for a sheer display of power, this Hulk did nothing as singularly demonstrative as toss that fucking tank across the desert. This Hulk theoretically has the power to leap for miles, which is the comic book and Ang Lee's Hulk's preferred means of getting around, but he never did. For much of the movie, this new Hulk was similar to Ang Lee's deer-in-the-headlights style Hulk, wondering why every time he shows his green face, soldiers shoot missiles and machine guns at him. However, the new Hulk clearly is a fan of his "Incredible Hulk: Ultimate Destruction" video game. He busted out the video game moves of vaulting up the side of buildings and the always-fun tactic of smashing a car into Steel Fists.

What it's like for Bruce Banner to actually be the Hulk was also disavowed from Ang Lee's version. Eric Bana's Bruce Banner was conscious within the Hulk and he said, "When I lose control... I like it." Edward Norton's Bruce Banner felt exactly the opposite. He remembers only flashes of his time as the Hulk and spends the entire movie trying to "get rid of it". Only in the end does he begin to see its advantages and, we assume, begin to gain a measure of control over the Hulk. I guess we'll find out in the sequel, or in The Avengers movie, whichever comes first.

What's missing from every cinematic incarnation of the Hulk I've seen so far is the crux of the character as I remember it from the classic Stan Lee comics from the 1960's. I'm no afficianado of the Hulk comic books; the original stories from the 1960's that I read as a child form the bulk of my Hulk knowledge. Thing is, that original version of Hulk had a personality. The original Hulk was self aware. He knew he comes from Banner but he thought himself different and better than Banner. Better than all the "puny humans." That Hulk had a fierce sense of pride in being the Hulk: "Hulk is the strongest one there is." Both movie versions and the television version of the Hulk have taken the route of portraying him as a brute, which he is, but without a personality.

The other thing missing from these Hulk live action adaptations is what I feel is a crucial component of the Hulk: The Hulk is the ultimate expression of "I can do whatever I want with no consquences". Banner is the one who has to deal with the consquences of the Hulk's actions, while the Hulk enjoys a freedom that neither Banner nor any other person has or can ever have. Hulk, a being of pure anger and negative emotion, can heedlessly break all of society's norms and laws. He smashes and rages without pity or regret.

It's a primal kind of freedom the Hulk has that anyone who has ever felt, say, road rage or felt slighted or mistreated in daily life can readily identify with. The Hulk, in his anger, does whatever the hell he wants. Thus, there's a level of jealousy towards the Hulk that Banner, a man who lives with unfortunate restrictions on his freedom and quality of life caused by the Hulk being part of him, must have towards his alter ego. Alternately, the Hulk of the classic comics despised Banner for being weak. He especially loathes the fact that Banner, being a part of him, is a weakness he sees in himself. To me, this is what the story of the Hulk is about. I've yet to see it presented as such in any movie.

In The Incredible Hulk, screenwriters Norton, Zak Penn, and director Louis Letterier fully embrace the Hulk's comic book and B-movie roots. The Incredible Hulk's opening credits established that it's an entirely new version by zipping through what was essentially a prequel Hulk movie, showing the revised origin of how Banner became a Gamma powered monster.

The movie then spent much of its time lovingly tipping its hat to the 1970's Incredible Hulk television show, wisely hitching its wagon to the nostalgia the older general public has for it. It was fun spotting all the in jokes and cameos: Bill Bixby on Banner's TV, the TV show music, the shot of Banner hitchhiking, the closeups of Banner's green eyes when he Hulks up, Lou Ferrigno as a security guard (and as the voice of the Hulk), the character named "Jack McGee" who's a reporter at Culver University, and the alias of "David B." Banner was using at the end of the movie when he was hiding in British Columbia. Stan Lee got his obligatory cameo, drinking Hulk blood-tainted soda and presumably Hulking out the way he couldn't when he guest starred on The Simpsons.

There was an homage to Peter Jackson's King Kong when Hulk and Betty Ross spent a night in a cave (thank goodness she didn't do a tap dance routine for Hulk). And because we're now living in the Marvel Age of Movies, SHIELD plays a role, the Super Soldier Serum and "Vita Rays" are mentioned, Stark Industries and Nick Fury get name dropped, and summer 2008's Mr. Popularity Tony Stark appeared, as the TV commercials promised, to make a no-longer surprising pitch for The Avengers.

Because Bruce Banner is played this time by Edward Norton, an actor who conveys copious amounts of both empathy and intelligence, it's much easier to feel for Banner's plight as he's on the run from both the U.S. Army and the thing that dwells within him. I really enjoyed the first act set in the shanty towns of Brazil where Banner lived a low-key life working in a soda bottling factory with the hottest woman in the City of God when he wasn't pining for Betty Ross and IMing a mysterious scientist looking for a cure (the handles Mr. Green and Mr. Blue were nice touches). There was a big plot hole of how, in this day and age, Banner was able to get from Guatemala and cross the US border into Virginia; we know he didn't Hulk out because of the Days Without Incident count the movie kept putting on the screen.

I started to get dismayed as the movie reached the third act that Banner had no character arc to speak of. He was a guy who wanted to get rid of the Hulk in the beginning and didn't change at all during the movie until the very end. Banner did a 180 degree turn when it was teased that he was learning to control and enjoy his Hulkacity. I'd have liked to see Banner become a Hulkamaniac a little earlier in the story, myself.

Liv Tyler was beautiful and in full-on sweet, supportive mode as Betty Ross, but she's about as believable a "cellular biologist" as Denise Richards was as a nuclear scientist. This brings up another pet peeve of mine in Marvel superhero movies: all of the characters we keep being told are brilliant scientists do and say nothing scientific or brilliant. Liv Tyler's Betty Ross, Jessica Alba's Invisible Woman, Julian McMahon's Dr. Doom, even Tobey Maguire's Spider-Man and Ioan Gruffold's Mr. Fantastic -- the way they're written in their movies, I doubt any of them could pass a 9th grade science exam. The only brilliant scientist in a Marvel movie who actually is a brilliant scientist: Tony Stark.

The most depressing moment in The Incredible Hulk may have been when Banner realized he can't have sex with Betty because he might Hulk out on her, or worse, in her, if he gets too excited. (Frankly, I'd probably kill myself if I were Banner.) And you're telling me when they were stuck in that cave that night, Betty didn't wonder about how much Hulkness he has in his size-changing ripped pants? Come on, we were all thinking it!

Tim Blake Nelson pops up as Banner's would-be savior Dr. Sterns, and finally, a brilliant scientist in the movie actually conveyed some brilliant science. I didn't realize who Dr. Sterns was until later when the Abomination knocked some Gamma formula into his brain, causing it to become abnormally deformed. I guess when Incredible Hulk 2 happens Hulk might just have The Leader to contend with. (Then again, three Spider-Man movies have gone by teasing Dr. Curt Conners and as of yet, no Lizard. So we'll see.)

The most interesting character in the movie, maybe even more than Banner, was Tim Roth as Emil Blonsky, the world's shortest Marine. He's a mean little guy who really wanted to go green. The scene when the Hulk kicked his ass into a tree was pretty great. Not so great was the Abomination itself, an unsightly and fairly dull CGI monster.

If there's a more boring villain in superhero movies than General "Thunderbolt" Ross, though, please spare me having to meet him. William Hurt, hiding behind his mustache, had virtually nothing to play, unlike the charming and scheming Obidiah Stane Jeff Bridges and his bald cap and beard got to play in Iron Man. Considering the resources General Ross wastes on capturing Banner; full military raids in Brazil, millions spent on giant sonic cannons that get Hulk smashed in a college campus, and helicopter assaults in New York City, no way this idiot shouldn't get courtmarshaled for being the world's shittiest commander. General Ross also believes for some reason that every day he leads a foolhardy military clusterfuck is Take Your Daughter to Work Day.

In its final 20 minutes, The Incredible Hulk devolves into a story of two fine actors who morph into not-quite-entirely-convincing-or-photoreal CGI monsters that fight. The good news is the fight, for as long as it lasts, is pretty good, if a little contained. It was a lot of fun to see the Hulk actually go house on an enemy, finally, although the Abomination pretty much cleaned Hulk's clock until the end, when Hulk got the anticlimactic tap out victory on the rooftop.

The whole fight I was wondering what brutal depths of property-damaging, comic book-style violence the Hulk would resort to in order to defeat the bigger and stronger Abomination. I figured Hulk would go all out and wreck Harlem to get it done. Instead of Hulk Smash, Hulk went MMA. But, as ever, at least Hulk's pants stayed on.
Posted by Back of the Head at 4:36 PM