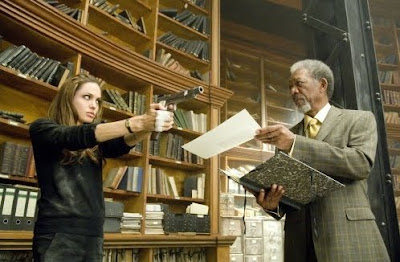 June 27, 2008
"Shoot this motherfucker!"
Wanted wants to be a lot of things, mainly a cross between Fight Club's hard-wired social commentary and The Matrix's blistering action. Sitting in a theater with a bunch of 22 year olds and under, I reflected that when I was their age, I had the real Fight Club and The Matrix when those movies were brand-spanking new and mind-blowingly innovative. These kids get Wanted. My generation got the original deal while these kids get the hand-me-down knockoff. You were born ten years too late, children. You got screwed.

Wanted is exactly the hyper, video-game, teenage boy tittilating, action picture it advertises itself to be, so on that level it works. I got a little tired of the movie's redundant one guy shooting a curved bullet and other guy shooting another curved bullet so the curved bullets collide in slow motion gimmick, but that's me. I'd say Wanted tried way too hard to be cool. If you wanna be cool, just be cool. Trying so hard just gets a little embarassing.

James McAvoy plays Wesley Gibson, a sweaty, sniveling loser who complains endlessly in voice over about what a sweaty, sniveling loser he is. When he walks outside his shitty apartment, Nine Inch Nails' "Every Day is Exactly the Same" follows him around until he gets to his job as an office drone. And then when he leaves work, Nine Inch Nails' "Every Day is Exactly the Same" starts up again. At least Wesley Gibson's shitty life has a rockin' soundtrack. Wesley Gibson is also the son of the world's greatest assassin and genetically inherited the ability to shoot the wings off of flies with bullets that are bigger than the flies are.

From there, Wesley Gibson is indoctrinated into the Fraternity, a cabal of dude assassins, and Jolie, the one token girl who plays rough with the boys. The Fraternity get their marching orders from Morgan Freeman, who gets his marching orders from a loom. Wesley Gibson also gets to sit in some sort of all-healing milkbath every day. Once, he gets to watch Angelina's bony, inked up, but still hot bare ass prance around the Fraternity spa. We should only be so lucky.

I enjoyed Wesley Gibson's Fraternity initiation of getting his face caved in and his belly stabbed with knives repeatedly. I also enjoyed when Wesley grew a set and used a keyboard to bash in the face of his asshole "best friend" who's been fucking his girlfriend. (Somehow this asshole forgot all about it and hero worships Gibson even more when Gibson makes a surprise visit to his old apartment to collect his father's gun and show off making out with Jolie.) The biggest laugh in the movie is when Wesley puts a gun to Freeman's head and warns, "I have a gun, sir!"

Problem is, I hated Wesley Gibson. Really did not like that little turd one bit. I didn't mind the Fraternity, although Jolie was the only one who had a backstory and something resembling a personality, which mostly consisted of her not saying anything and punching Gibson when she got annoyed.

The big reveal of What's Really Going On leads full-onto Wesley Gibson's Plan of Retaliation That Makes No Sense. It involves Wesley strapping bombs to rats, driving them into the Fraternity fortress, and then running through the fortress screaming and shooting. Then he stops at the floor Morgan Freeman is on and screams for him to come out, only to be completely surrounded by the main guys in the Fraternity he didn't kill.

There's some sort of moral dilemma over what the Fraternity is up to, where Freeman has violated the code they live by, but it seemed to me he had a good reason for doing so. Jolie disagreed since she lived her entire life by the code. Nevertheless, when Freeman urged his cohorts to "Shoot this motherfucker!" I was in wholehearted agreement with the sentiment, mainly because I could do very well without sequel movies about Wesley fucking Gibson.

My suggestion for Wanted 2: Wesley Gibson meets the opposite of the Fraternity, the Sorority. A bunch of girl assassins with one token dude who kill via bakesales, bikini carwashes, and STDs.
Posted by Back of the Head at 5:12 PM