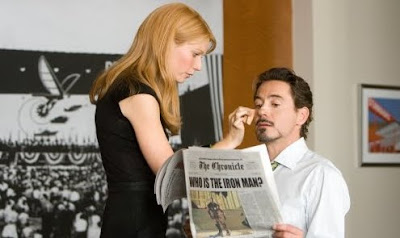 I Am Iron Man

Think about all the superheroes of the last decade who made it onto the big screen. Would you want to be buddies with any of them? Peter Parker? He's no fun unless he's wearing red and blue leotards and hanging upside down from the ceiling. Clark Kent? He's too busy moping around and stalking his ex-girlfriend. Wolverine? Maybe, except he'd probably stab you thrice in the chest if you looked at him cock-eyed. Bruce Banner? Yeah, that'll turn out well. The Fantastic Four? Daredevil? Ghost Rider? Fuck all those freaks. Losers, the lot of them. Bruce Wayne? Hell no. He seems cool on the outset, but that guy clearly has issues. Iron Man finally introduced me to a movie superhero I wanna hang out with: Tony Stark.

Tony Stark is the coolest cat in superhero movieland. More money than Bruce Wayne, smarter than Bruce Wayne, way more fun to be around than Bruce Wayne. Parties in Vegas, a private plane complete with stripper pole and stripper stewardesses, a cooler, more high tech house and underground lair than Wayne Manor and that dank cave underneath it. A way, way cooler superhero suit than Wayne. Stark's parents are dead too, but unlike Wayne, Stark got over it. Just about in every way, Tony Stark trumps Mr. Wayne. (No disrespect to Alfred and what he brings to the table, but turning Stark's faithful butler Jarvis in the comics into the AI of Stark's home network, voiced by Paul Bettany, was a stroke of genius.) The only negative for Stark is that freaky hole in his chest but he still manages to turn it into a fashion statement.

In Tony Stark, Robert Downey, Jr. created the most likeable rogue ever to leap from the pages of a comic book onto the big screen. The very first scene where Stark is introduced in the humvee (funvee, not the humdrumvee), we instantly like him. His transformation into Iron Man; more importantly, from a rich, brilliant, uncaring ne'er-do-well into a rich, brilliant guy who does care, is a terrific spin on the hoary old "with great power comes great responsibility" chestnut Spider-Man flogged to death in three movies. I'm not sure if the script was just very well written or if director Jon Favreau encouraged Downey to improvise his dialogue, but Stark had the sharpest, cleverst snappy patter of any movie superhero since... well, ever.

The rest of the cast was also top to bottom stellar, from Jeff Bridges as Obediah Stane, Terrence Howard as James "Rhodey" Rhodes, to Leslie Bibb as the ballbusting reporter Stark slept with. Even Gwyneth Paltrow as the unfortunately name Pepper Potts didn't rake on my nerves, that is until the third act when she want from supercompetent Girl Friday to fretting damsel in distress: "Oh Tony! Oh no! You could die!" Lady, just shut up and turn on the reactor!

Still, some of best interaction Downey had was with himself, endlessly jabbering with, instructing, or scolding his cadre of robot helpers. While probably the best scene in the movie was when Stark had Pepper remove his robot heart, the most oddly touching moment in the movie was when his little robot brought Stark that same robot heart when he was dying.

The sequence with Iron Man versus the jet fighters was amazing to watch. Iron Man's battle with the Iron Monger wasn't just an excuse for special effects action, but there was logic and strategy behind the characters' behavior. (Stark was running on 48% power on his older robot heart. The callback to icing up in the ionosphere was clever, and it failed to kill Stane as it did Stark. When Iron Man jumped on the Iron Monger's back and yanked out wires, they were specific and bought him necessary time.) But it's a testament to how good the acting and storytelling were that the CGI never overwhelmed the human story of Tony Stark.

Seeing Iron Man in action blowing up tanks was great but there is no "Iron Man" without Tony Stark, and Stark was always the most interesting person in the picture. But for a guy with no superpowers and a fatal hole in his chest, Tony Stark sure could absorb repeated blunt force trauma. Considering how many times he crashed into walls, cars, buildings, etc. at high velocity, his bones should be powder. He should be paralyzed. Or you know, dead.

I loved the ending: Tony Stark ignoring the (comic's silly) cover story that Iron Man is his bodyguard and declaring: "I am Iron Man." Brilliant. Brilliant because given the universe the movie set up, it was impossible for Stark to maintain a secret identity. Also, I've always felt secret identities are generally stupid. Tony Stark wears an armored suit and flies around fighting evil. He doesn't care who knows it.

The fanboy in me was thrilled with how deftly Iron Man laid down the groundwork for not just its sequels but the scope of the larger Marvel Comics universe of movies on the way. I liked the running gag of the acronym for SHIELD no one could remember. I liked how the terrorist cell that kidnapped Stark was called the Ten Rings, a setup perhaps for the Mandarin, Iron Man's Chinese arch foe in the comics who wields ten alien rings of power. Who in the know didn't snicker at Rhodey's "Next time, baby" when he saw the grey armor for War Machine?

If you stayed through the credits, you saw the appearance of Samuel L. Jackson as Col. Nick Fury, who wants to tell Tony Stark about the "Avengers Initiative." Never has a comic book universe's translation into a cohesive movie universe been attempted like this, and it seems very exciting. (If the quality of the rest of the movies holds up.) And even if the other Marvel movies blow, Iron Man is still a state-of-art movie marvel all its own.
Posted by Back of the Head at 4:35 PM