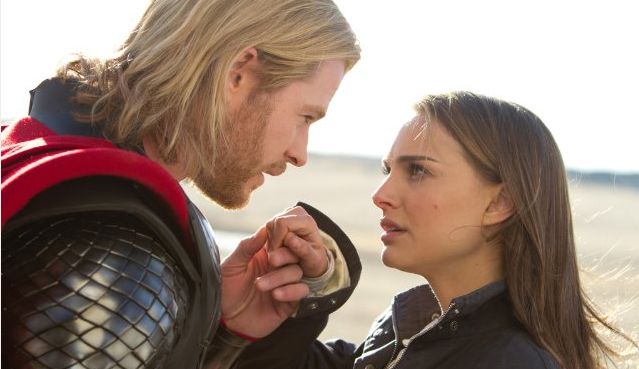 Kenneth Branagh's Thor tells the mythic tale of how the "vain, selfish, greedy" God of Thunder fell to Earth and had a change of heart after a weekend with Natalie Portman. Equal parts otherworldly, comic booky tale of gods and monsters and pretty girl-meets-thunder god romantic comedy, Thor is surprisingly more successful and entertaining as the latter. Even if there happens to be a better rom com this summer than Thor, it will no doubt lack Frost Giants, giant Destroyer robots, and the Warriors Three.

Chris Hemsworth, who portrayed the doomed father of Captain Kirk in JJ Abrams' Star Trek, exceeds all expectations as the mighty God of Thunder, heroically balancing Thor's godly and human sides. Hemsworth is quite simply awesome as Thor; his performance embodies the comic book character and vividly brings Thor to life in a manner equal to Hugh Jackman as Wolverine. In the first act of Thor, Hemsworth has all the arrogance and proper swagger one would expect from the Odinson, wielder of the enchanted hammer Mjolnir. The headstrong Thor leads his bestest fighting buddies into the land of the Frost Giants to avenge their affront of attacking Asgard and ruining his coronation as King. For this folly, Odin (Anthony Hopkins, who can and does play this role in his sleep) strips Thor of his powers and banishes him from Asgard to Earth "forever" to teach his son some humility.

Remarkably, the now-human Thor only gets more charming, gallant, and heroic when he meets theoretical physicist Jane Foster (Natalie Portman), her wiseacre assistant Kat Dennings, and fellow scientist Stellan Skarsgard, who grew up in Norway hearing all about the Norse myths and can't accept this tall, jacked up blonde dude is the actual God of Thunder he claims he is.  Despite repeatedly running him over with her van (a very funny running gag) Thor and Foster take an immediate shine to each other.  The chemistry between Hemsworth and Portman is palpable, and one can easily grasp how both Portman and Dennings can swoon over their Men's Health coverboy new friend, even when he's smashing coffee cups and demanding more breakfast. (Another fun joke for fans of the comic is Thor being named Dr. Donald Blake, after Portman's ex. Donald Blake is the human alter-ego of Thor in the original comics. This also means that Portman can't seem to escape falling for guys named "Donald Blake".)

Portman is adorable; any quibbles about her character being a brilliant physicist attempting to prove her theory of wormholes to other dimensions (which turns out to be the fabled Rainbow Bridge to Asgard) are drowned out by said adorableness. For her part, Dennings provides the most cheerful comic relief of any Marvel movie. Portman and Dennings completely grasp the fun, jokey tone of their half of Thor, making their scenes of helping Thor break into the SHIELD facility (which looks suspiciously like an Apple Store) built around Thor's fallen hammer in New Mexico and run by the stalwart Agent Coulson (or "Son of Coul" according to Thor) more fun than all the cosmic derring-do in Asgard. Director Branagh goes all out invoking Excalibur in Arthurian myths by having everyone and anyone, including a town of rednecks, Loki, and a then-unworthy Thor himself, try and fail to lift the hammer Mjolner from the ground.

The home of the gods, Asgard, is magnificently realized as a shining, sweeping golden megalopolis, though it's so golden one almost expects to see the word TRUMP emblazoned on the side of Odin's royal palace. The gods themselves are an amusing, ribald bunch, played by Ray Stevenson, Idris Elba, Tadanobu Asano, and Josh Dallas. Radiant Jaimie Alexander is Sif, the warrior goddess who can out fight the Warriors Three. Sif is the logical love match for Thor, and we get the sense Sif thinks so as well, but Thor only has eyes and a swinging hammer for Portman. Thor is the acknowledged alpha male of the group but for hale and hardy immortal space gladiators, the rest of Warriors Three seem kind of harmless. The gods' battle with the Frost Giants is sufficiently bad ass, mainly because Thor showcases all his classic comic book fighting tricks like summoning storms of lightning, making the earth quake, and throwing his hammer to smash into anything and everything.

And yet, when no battle is being fought, the lengthy Asgard half of Thor feels underwritten and surprisingly lifeless, as if rendered inert by its own designs of grandeur and pomposity. We are shown at the start that thousands of Asgardians inhabit their golden city, but they all disappear for the rest of the picture. The immense halls and chambers of Odin's royal palace seem uninhabited except for the occasional guards standing in the background of scenes. The Asgard half of Thor lacked a robustness, a sense that Asgard was a real, bustling place full of activity. What's more, Asgardians tend to speak to each other in stilted Shakespearean dialogue comprised of basic plot points, saying mainly what exposition is necessary to move the story forward. Again, in stark (pun unintended) contrast, the more entertaining half of Thor set in New Mexico only served to highlight how dull life seems on Asgard. No wonder Odin likes to sleep through centuries of it.

Tom Hiddleston makes for a striking Loki, the mischievous brother of Thor, but damned if I could figure out exactly what his deal was during the movie. Loki is a cypher: He begins jealous of Thor's ascent as future king of Asgard and by his own admittance, he allowed the Frost Giants into the city to disrupt Thor's coronation. Loki eggs his rash, impulsive brother on to provoking a fight with the Frost Giants but secretly notified Odin that Thor was doing so. He claimed he had no idea Odin would de-power and banish Thor, but he must have since getting rid of Thor was one of the things he wanted. While fighting the Frost Giants, Loki discovers he can't be harmed by their cold; when he confronts Odin, he learns he was born of the Frost Giants before Odin has a stroke and falls into Odinsleep.

From there, Loki becomes King of Asgard and lies to Thor that Odin is dead and Thor's banishment is permanent, but Loki's motivations get murkier. He banishes Sif and the Warriors Three to Earth and sends the Destroyer robot to kill them all, but why doesn't he just kill Odin as well? Loki invites the Frost Giants to invade Asgard but then kills the Frost Giant king before it can kill Odin? Loki then decides he wants to destroy the entire Frost Giant land and almost does so until Thor stops him (I did like how Thor placed the hammer on Loki's chest to pin him down.) Loki is supposed to be a mastermind but he didn't exhibit real forward-thinking scheming; he was mostly making things up as he went along. Loki lacked a clear through line for his villainy, and the tag at the end of Loki pining for the Cosmic Cube in Nick Fury's possession only raises further questions about what the hell Loki is up to.

At its best, Thor is thunderous entertainment; an ambitious and generally successful foray by Marvel to bring the magical elements of their universe to cinematic life. To its credit, Thor is much more seamless than Iron Man 2 in incorporating the larger Marvel universe, dropping hints of Bruce Banner, a cameo by Jeremy Renner as Hawkeye, and a post-credits tag alluding to the forthcoming Captain America, setting up next year's Marvel Team Up movie The Avengers. Thor himself is a worthy and noble new addition to movie superheroes. When the Mighty Thor, at the fullness of his powers, soars into the sky and calls forth the lightning, yea, verily, Thor is a movie god worth believing in.
Posted by Back of the Head at 6:16 PM