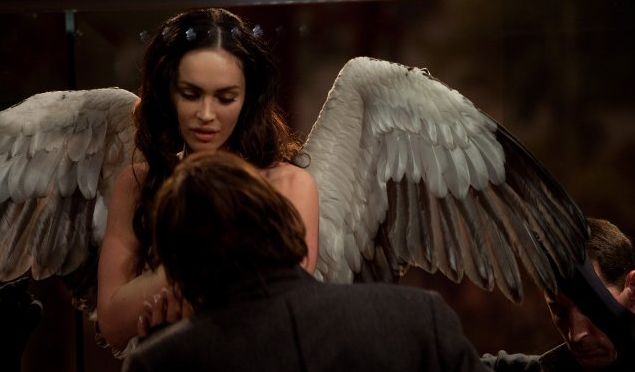 ** SPOILERS **
Passion Play is the coming out party for Megan Fox as a serious, dramatic actress. Listen, no one will ever confuse Fox with Meryl Streep - I mean, what's more important, being an Academy Award-winning actress or FHM's Sexiest Woman Alive 2008? - but in Passion Play, Fox tries. She really, really tries. Fox earnestly gives her best acting performance in a film yet. Whatever Passion Play is, and good it ain't, Fox isn't to blame. In some strange movie world that vaguely resembles reality, leathery Mickey Rourke plays a down on his luck musician. A local crime lord (Bill Murray!) wants Rourke dead. Rourke stumbles upon a bizarre carnival that for some reason pitched its big top in the middle of a desert. Roaming backstage through the freak show, Rourke encounters Fox, "the bird lady", who happens to have a set of real wings strapped to her back. Is she an angel? She looks like an angel. Fox and Rourke literally bust out of the big top and run off together. Raised as a carny all her life, Fox is introduced to the "real world" of crashing in sleazy motels and seeing Mickey Rourke with his shirt off. Even while Rourke falls for Fox, he cuts a deal with Murray to put Fox's talents to work for him. Naturally, the deal goes sideways and Rourke must find a way to save Fox and redeem himself. Passion Play is just plain weird; the same material in the hands of a genius maverick like Terry Gilliam could have been a stylistic wonder of a head trip instead of a head scratcher. (The scenes involving the carnival is reminsicent of Gilliam's stylistically wondrous head trip The Imaginarium of Dr. Parnassus.) The effects of Fox's wings are actually really well done in some scenes when she's standing around but all that goes out the window when we're shown Fox flying. Though we're teased throughout by Fox's potent sex appeal, Passion Play still fails to let the pigeons loose.

But I'll say this for Passion Play, it contains the greatest reference to ALF in the history of cinema: