The Imaginarium of Dr. Parnassus (***)

THE IMAGINARIUM OF DR. PARNASSUS 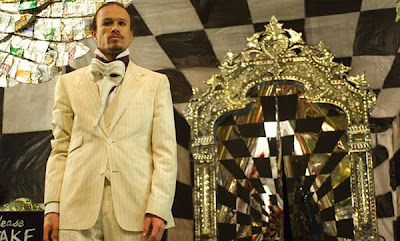 Heath Ledger's final film is an often wondrous, always totally bizarre romp through the mindscape of Terry Gilliam. The bewildering narrative, involving immortal Christopher Plummer wagering with the Devil (Tom Waits, whose mere presence got "I Don't Wanna Grow Up" stuck in my head), a traveling carny show, and a mysterious stranger who knows how to trick his way out of a hangman's noose, is pretty much besides the point.  Follow it if you dare; it's better to just go along for the ride. Dr. Parnassus is primarily a showcase for the incredible production design and the sheer strangeness of what's on the screen. Gilliam directs the actors to physically go for broke in every take; I've never seen so much manic energy and flailing limbs in every shot.  Due to Ledger's untimely death, several sequences taking place in the dreamworld of the Imaginarium were incomplete. Johnny Depp, Colin Farrell, and Jude Law all took turns pinch-hitting for Ledger.  I appreciated the stark realities of the pack of carnies traveling around London scrounging for money and meals, sometimes more than the fanciful whimsy on display.  Lily Cole is fetching as Parnassus' porcelain doll-esque daughter Valentina and Verne Troyer delivers some amusing meta-dialogue as Plummer's lifelong Jiminy Crickett. Terry Gilliam has a bigger imaginarium than you.
Posted by Back of the Head at 2:45 PM