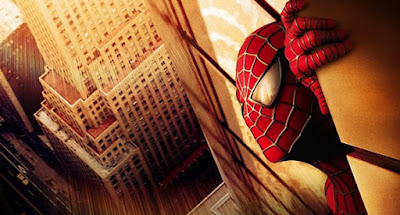 John Orquiola is thrilled to hear Sam Raimi, Tobey Maguire, and Kirsten Dunst were all booted off of Spider-Man 4. That franchise needed a total reboot after 3. My Spider-Sense is tingling.

I'm still excited. I like this reboot idea, and the potential for a new vision for Spider-Man. That status update was a bit rough on Sam Raimi and his actors, though, so let me spin some praise their way.

To me, for this past decade, Spider-Man 2 and The Dark Knight are two sides of the same coin, the finest examples of what two kinds of comic book superhero movies could be. Spider-Man 2 crystalized what I think a Spider-Man movie ought to be, straight from my memories of being 10 and reading the original Stan Lee and Steve Ditko comics collected that my dad got me. Spider-Man 2 was a tough act to follow (see Spider-Man 3).

Furthermore, Raimi crafted some unforgettable moments in his Spider-Man trilogy. I'm talkin' 'bout the upside-down kiss between Spidey and Mary Jane in the alley in the rain (and the bouncing boobies afterwards.)  The battle on the train between Spider-Man and Dr. Octopus in 2.  And let's not forget all that dancing in 3. (I'd love to, but we'll never forget the dancing.)

Did Sam Raimi still have gas in the tank to make a great swansong in Spider-Man 4? Probably. I hear he was motivated to go out strong after 3's poor critical and audience reception (not that 3 didn't rake in a ton of money anyway despite most people's complaints). My understanding of the situation is that Raimi told Sony he couldn't make the production schedule for a 2012 release; nor was Sony totally on board with Raimi's ideas for Spider-Man 4.

Despite his mostly successful (and when he was successful, he was wildly successful) track record and what he did not just for the Spider-Man franchise but for setting the general "rules" and expectations by audiences for superhero movies this past decade, I personally don't believe Sam Raimi is the only person capable of directing a Spider-Man movie.

And while Tobey Maguire did an amazing (pun intended) job of being the Peter Parker for a generation, I also don't think he's the only person to play that role. (Hell, he's getting pretty old to play Peter Parker anyway. Peter should be a teenager or at least a young man. Maguire is in his 30's and is starting to show his age.)

Surely there are some talented directors out there who could pick up where Raimi left off and bring a new vision and energy to Spidey. I hesitate to name names, but looking at the Batman franchise, 6 years ago who could have guessed what Christopher Nolan could do with Batman?

It all depends on who Sony hires to direct and star. Hopefully, it will be someone good - someone extremely talented with a vision and passion for Spider-Man to equal Raimi's - and that the filmmakers aim to maintain the quality Raimi brought - because it's the quality of the Spider-Man movies that brought audiences to theaters in droves.

If they hire shitty people to make shitty Spider-Man movies, then I'll be pissed, and Sony will reveal themselves to be total idiots. But until then, I see no reason to not be optimistic for a new cinematic vision for Spider-Man.

(Oh, none of this is to say I don't have a healthy distrust for Sony and their ability to screw up a reboot. But unless they actually do screw the reboot up, I'm hoping for the best...)