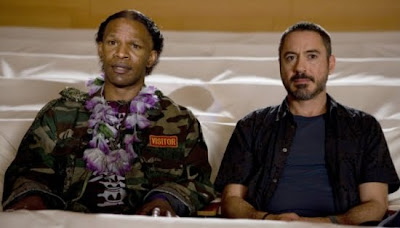 Robert Downey Jr. is on the roll of his career but in between Iron Man and Sherlock Holmes is The Soloist. Based on a true story, Downey plays an LA Times columnist who encounters Jamie Foxx, a mentally ill homeless man who was once a musical prodigy.  Along with discovering Foxx's life story and explaining how he flunked out of Julliard and ended up on the streets of LA, The Soloist also tries to shed some light on the plight of the homeless in Los Angeles. Much of the story takes place in a slum area reminiscent of "Hamsterdam" in season 3 of The Wire. Directed by Joe Wright (Atonement), The Soloist never seems clear about  what we're supposed to feel about the homeless, in general, and Foxx, specifically, besides basic pity.  The film tries to explain Foxx's schizophrenia but that somehow made Foxx's character less interesting. The flashbacks involving how Foxx fell in love with music as a boy were more compelling than the adult Foxx's plight. Downey, meanwhile, goes through a character arc where, during a quiet third act moment with his long-suffering editor and former lover Catherine Keener, he literally spells out what his character learns during the movie.  He then finds Foxx and spells it all out to him personally. One can tell everyone in The Soloist was fishing for Oscars, but they had a faulty rod.
Posted by Back of the Head at 8:07 PM